Analysts at the National Australia Bank (NAB) offers a sneak peek at what to expect from New Zealand Q4 2017 GDP data due out early Thursday.

“The highlight of the NZ week. Not that it's looking like being a big deal.

We estimate a steady quarterly gain of 0.7%, after 0.6% in Q3. This is what the Reserve Bank expects too, with reference to its February Monetary Policy Statement. 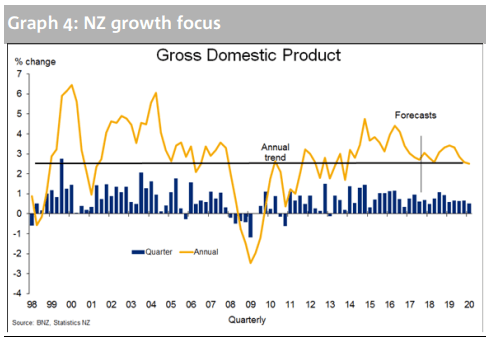 A quarterly expansion of 0.7% would set annual growth at 3.1%. While that wouldn't look so strong in per capita terms it will appear robust to the recent political transitions.

Our 0.7% Q4 GDP expectation has the vast majority of its components expanding to differing degrees.

If there is a curve ball in Q4 GDP it could well relate to manufacturing being either flat or big (such have been the extremely mixed messages for the sector with respect to the quarter).”