Update April 26: Nio Inc (NYSE: NIO) has closed Friday's session at $41.08, a daily gain of 3.76%, and completing an increase of some 12% from the lows under $35 seen beforehand. The surge is due to PResident Joe Biden's ambitious climate pledges, which favor electric vehicles over traditional ones. Moreover, optimism about the global recovery is lifting all boats. According to after-hours trading, shares of the Chinese EV-maker may further extend their gains ahead of its all-important earnings report.

NYSE:NIO is back on the radars of investors after hitting a triple bottom chart at around the $35 price level, signalling that the stock could be ready for a bullish swing. On Thursday, shares of the Chinese electric vehicle maker added 1.75% to close the day at $39.57, after reaching an intraday high price of $40.45 which is the highest point since the start of April. Shares of Nio are finally back at the crucial 50-day moving average, but are still lagging the 200-day moving average which shows the steep downward trend that NIO was on.

Despite the performance of the stock, NIO has come flying out of the gates in 2021 as the company attempts to build on its massively successful year in 2020. NIO has two new vehicles set for production including the new ET7 luxury sedan, as well as two new models set for production in 2022. NIO has also announced it plans to upgrade its popular battery swap infrastructure to have 500 stations by the end of 2021, as well as striking a deal with Ford (NYSE:F) so that drivers of the new Ford EVs can use NIO charging stations as well. Finally, NIO has plans for a new production plant that should boost future deliveries and sales, even though the company has been hit by the global chip shortage. 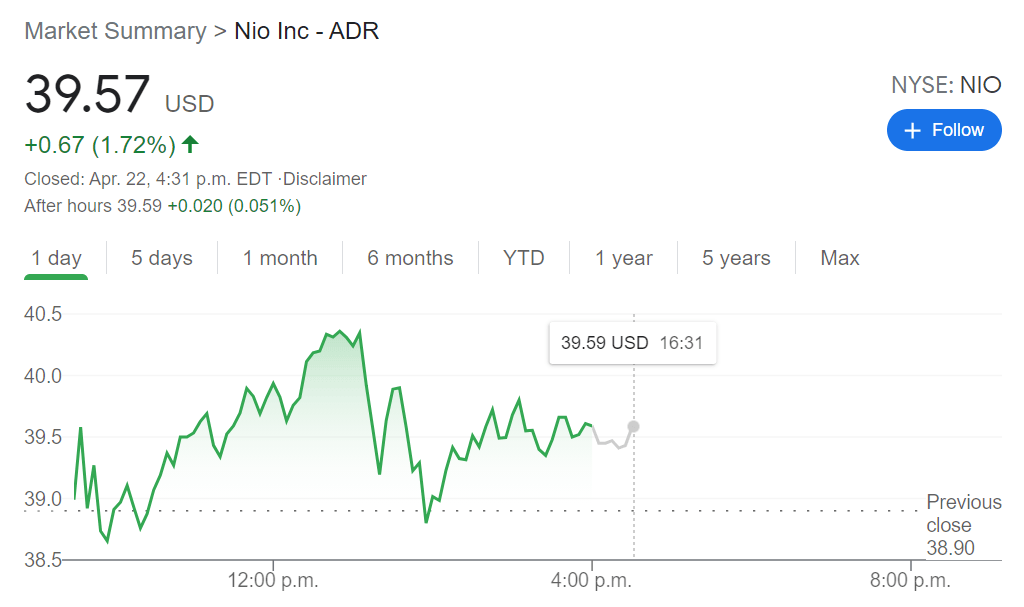 NIO put on a display at its hometown Shanghai Auto Show recently, as it showed off the new ET7 model, as well as announcing a collaboration with Sinopec Shanghai that will see NIO setting up its Power Swap 2.0 stations at Sinopec’s gas stations. NIO CEO William Li was also very bullish on the Chinese electric vehicle market moving forward, stating that he expected electric vehicle penetration in China to rise to 20% over the next two years.