Update: Jeffries initiates coverage on NIO with a hold rating and a price target of $60.

NIO is struggling to hold onto the high ground on Thursday, trading at around $62. The Chinese carmaker's stock is weathering negative comments from Michael Dunne of ZoZo Go, which said that shares of XPend, Li Auto – and also NIO – are due for a correction. Dunne was quoted on CNBC, giving his words a substantial echo. On the other hand, he added that these firms may become the "Tesla of China" – echoing sentiment seen a few years ago. Holding up against concerns shows bulls are resilient – a sign of strength. A stock that remains bid in response to adverse developments has the potential to rise when the storm fades away.

NIO has had, like its big brother Tesla, a stellar 2020, and investors are asking can continue. Well, following NIO’s investor day over the weekend the answer appears to be a strong yes. NIO announced plans for a new luxury sedan, a longer-range battery, and a debt issuance. NIO announced its ET7 luxury sedan would have a range over 1,000 kilometers, more than the range of most highly efficient diesel cars, further pushing NIO and electric cars into the mainstream. Technology always catches up to consumer needs and here is more evidence.

Just as a little explainer, NIO offers the ability to swap out its car’s battery in about three minutes, the same time as it takes to fill your tank with gas! So, the main issue consumers have with electric vehicles (EV’s) is solved. Tesla by comparison gets its battery fully charged in about 80 minutes. NIO is also able to reduce the cost of its cars by offering the ability to lease the battery.

NIO also announced it would be using new battery technology in 2022, using solid-state batteries. These batteries are much more efficient than the lithium-ion batteries with quicker charging times, longer range, etc. Solid-state batteries have been the holy grail of the EV market and NIO is ahead of the game and Tesla in using them!

The Chinese electric car company very importantly mentioned at NIO Day on Saturday, January 9 that its new luxury sedan would meet European safety standards, hinting at expansion into global markets. NIO doubled its production in 2020. The company announced at NIO Day plans to raise $1.3 billion in bond issuance. This will be used to strengthen its cash- and- balance sheet and for general corporate purposes. This should further enhance growth ability.

NIO does look a bit overbought on the chart recently, but just like Tesla the train may keep on running. RSI trend is confirming the bullish trend with matching new highs. Thankfully, we have seen a bit of a pullback to close the gap in the chart.

Some key support levels are the old high from November $58.37, and December high of $49.86. A break below the latter would end the bullish trend.  MACD is crossing its signal line so caution is needed before entering longs to see how this develops.

Traders looking to get long but worried about the chart could go long NIO/short Tesla to give some cover. Tesla by all metrics looks hugely overvalued but the trend is always your friend, not fundamentals. 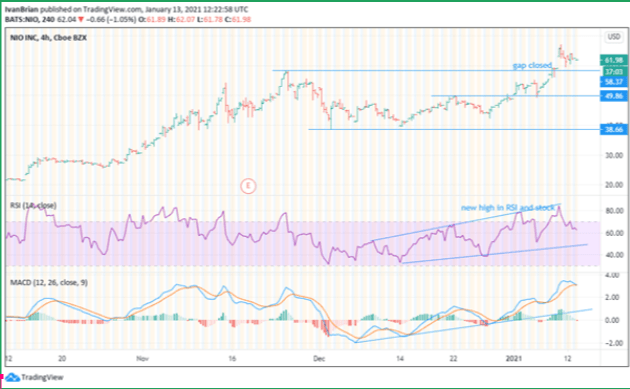 The author has no position in any stock mentioned in this article and no business relationship with any company mentioned.  The author has received compensation for writing this article. The author and FXStreet are not registered investment advisors and nothing in this article is intended to be investment advice. It is important to do your own research before making any investment and take independent advice from a registered investment advisor. This article is for information purposes only. We/I do not provide personalized recommendations. I make no representations as to accuracy, completeness, suitability of this information. I will not be liable for any errors, omissions or any losses, injuries or damages arising from this information display or use. I will not be held responsible for information that is found at the end of links posted on this page.