Update August 31: Nio Inc (NYSE: NIO) extended its recent bearish momentum into a new week on Monday, although managed to stage a quick recovery from five-day lows of $36.64. The stock price closed the day at $37.80, still down 0.66%. NIO shares failed to benefit from the record run on Wall Street indices, as China’s fresh crackdown on the country’s private sector industries weighed. China’s regulatory curbs have been the main factor driving shares in the EV maker lower since July.

NYSE:NIO fell once again on Friday and lagged the broader markets and EV Sector. Shares of NIO are still up by 1.63% during the past week, but down nearly 10% during the past month. On Friday, Nio dipped by a further 0.55% and closed the trading week at $38.05. Federal Reserve Chairman Jerome Powell reiterated his position on soft tapering to potentially begin at the end of 2021. The news sat well with investors and growth and tech stocks soared during the session, as the NASDAQ hit a new all-time high after gaining 1.23% to close the week.

The Chinese government crackdown on tech companies continued as it takes a stricter stance on the usage of personal data. Things reached a boiling point when ride-hailing giant Didi (NYSE:DIDI) had its IPO on Wall Street earlier this year. Since then, Beijing has been on a rampage that has seen powerful tech companies like AliBaba (NYSE:BABA) and Tecnent (TCEHY) lose billions of dollars in market cap during one of the worst stock corrections in ADR history.

The President of Nio rival XPeng (NYSE:XPEV) is confident that EV Makers are actually supported by the government. Brian Gu stated that Chinese automakers are actually ‘on the right side of regulation’ as the CCP identifies the industry as critical infrastructure. Indeed, both Nio and XPeng received heavy rounds of investment from the local governments, so it shouldn’t be surprising that the EV industry is left out of the CCP’s crosshairs.

Update August 30: Nio Inc (NYSE: NIO) ended Monday down 0.66% at $37.80 per share, as Wall Street was torn between US Federal Reserve Head Powell dovish words and hawkish comments from other Fed officials. The Nasdaq Composite added 136 points, while the S&P 500 also closed in the green. The DJIA and the NYSE, on the other hand, finished the day in the red. Additionally, investors are turning their eyes to US data to be released later in the week, and whether if strong figures may twist Powell's hand. 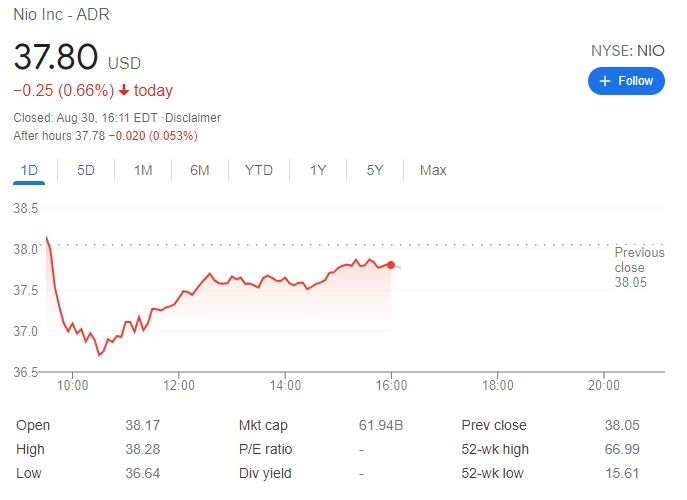 Update: Nio Inc (NYSE: NIO) is set to bounce from $38 as a new trading week begins. Shares of the Chinese electric vehicle maker have been stabilizing in recent days as investors await the next moves from Beijing. Authorities in the world's second-largest economy are pursuing their biggest tech companies. However, the extent of the regulatory efforts is unclear. Broader markets have cheered the Federal Reserve's reluctance to withdraw stimulus from the economy just yet.