A financial risk or the best way to capture market share? Nio Inc (NYSE: NIO) has been betting on expanding its sales, even at the expense of handing out cars without any initial cost. Investors seem to like the idea, pushing shares higher.

After closing at $58.34 on Thursday, an increase of 1.09%, Friday's premarket trading is pointing to another increase of 0.55%, which would send shares to the highest since January 14. It would not take much more for NIO to surpass the peak closing price of 2021, which stands at $62.70. 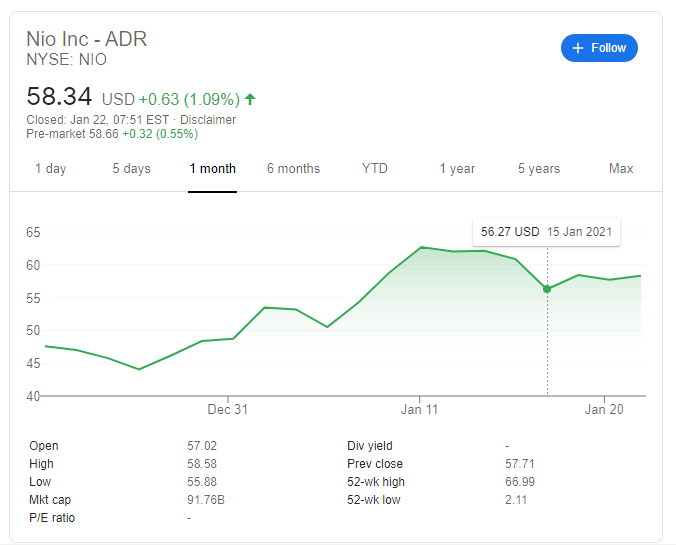 The Shanghai-based electric vehicle maker has announced that customers may grab one of three different models without making a down payment. The limited-time proposition runs through February 28 – which is ample time to make a substantial amount of sales.

This recent move is no the first by NIO – it is repeating a similar feat it initially performed back in September 2019. Back then, the trigger was an attempt to raise sales, while the 2021 zero downpayment approach could be an attempt to compete with Tesla in China.

Investors were happy to see large growth percentages in the company's earnings reports – even at the cost of slower cash flow. At this juncture, markets seem to support NIO's move to expand its reach. It is essential to remember that every car sale implies servicing costs – including those for batteries.

EUR/USD gained traction and climbed to its highest level in more than 10 days above 1.1360 amid the broad-based selling pressure surrounding the greenback. The data from the euro area showed that the annual CPI jumped to 3.8% in November from 3% in October, helping the shared currency preserve its strength.

GBP/USD is making a minor recovery attempt above 1.3300 on Tuesday, as the US dollar turns south again in tandem with the Treasury yields. Renewed Omicron covid variant fears damp the market mood as well as the pound. Focus on covid updates, US data and Powell.