Update: NYSE:NIO is set to close Wednesday with losses, now trading at $28.80 per share, down 2.74% in the day, and near a 52-week low of $27.52. Stocks managed to trade in positive territory at the beginning of the session and following the lead of their European counterparts but quickly turned red.  The NYSE is down 24 points, while the worst performer is the DJIA, down over 100 points. 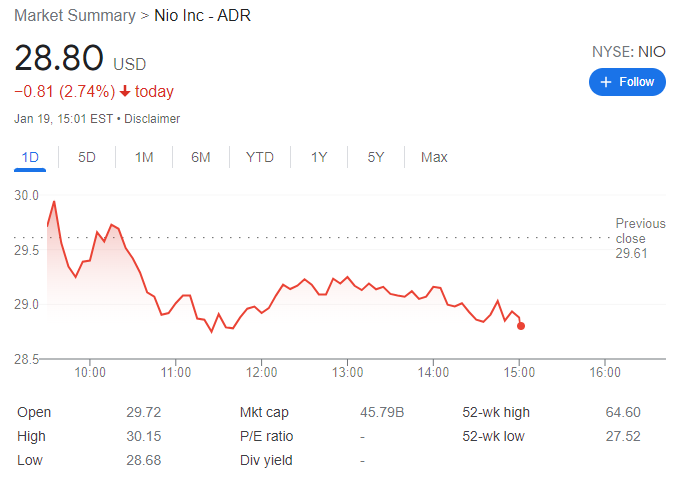 NYSE:NIO lost the $30 price level on Tuesday as continued pressure on growth stocks saw further losses by EV makers. Shares of Nio fell a further 4.33% on Tuesday and closed the trading session at $29.61. It is a new week but the same old story for tech stocks as growth names continued to fall following the Martin Luther King Jr. holiday on Monday. The NASDAQ was pummeled on Tuesday as ten-year treasury bond yields hit their highest mark in two years. The Dow Jones and the S&P 500 also fell as big bank earnings reports got the season off to a tenuous start.

The EV sector was one of the hardest hit again on Tuesday and it wasn’t just Nio that was trading in the red. Shares of Nio’s domestic rivals, XPeng (NYSE:XPEV) and Li Auto (NASDAQ:LI) fell by 4.77% and 2.12% respectively. Likewise, American EV makers like Tesla (NASDAQ:TSLA), Lucid Group (NASDAQ:LCID), and Rivian (NASDAQ:RIVN) were all trading well below water. Rivian dipped below its IPO price for the first time since its Wall Street debut back in November of 2021.

Speaking of Rivian, it was announced on Tuesday that at least somebody has made a profit off of its stock so far. There are few companies that are hotter than legacy automaker Ford (NYSE:F) right now and that continued on Tuesday when it announced it has made an $8.2 billion gain so far from its 12% stake in the electric truck maker. Even shares of Ford were trading lower by 3.22%, as the company’s market cap dipped back below $100 billion.