Update: The Gores Guggenheim (NASDAQ: GGPI) stock price staged sharp recovery and tested the $11.50 barrier before retreating slightly to end Thursday at $11.23, still 3.60% higher on the day. Investors sold off the stock price heading into the company’s merger with Polestar SPAC, although picked up fresh bids on the completion of the proposed merger. Polestar will now make its debut on Nasdaq under the ticker "PSNY" as soon as later this week. Industry experts believe, “GGPI remains attractive at current levels, considering Polestar's growth prospects buoyed by key near-term catalysts.” Markets also cheered the day 2 of Fed Chair Jerome Powell’s testimony testified before the House Financial Services Committee on Monetary Policy and the State of the Economy. Powell remained confident on the economic growth, despite reiterating that recession fears could be “very challenging" to ensure a smooth landing.

Gores Guggenheim (GGPI) stock merger with Polestar looks set to debut on the Nasdaq on Friday under the ticker PSNY. The vote to take Polestar public via a SPAC deal took place on Wednesday, and it is anticipated that the vote carried through. In anticipation of a positive outcome, GGPI stock rallied 12% on Wednesday to close at $10.84.

Polestar is a spin-off from Volvo and its Chinese backer Geely. Polestar will be a fully electric vehicle manufacturer and will utilize existing Volvo networks to scale its operations. Polestar will use Volvo's manufacturing plant in South Carolina as well as other sites in China. The cars will compete in a similar segment to Volvo, that of the luxury car sector toward the top of the market.

Polestar was relatively unknown in the US until a cheeky Superbowl commercial, in which it took a swipe at Tesla, increased its brand awareness. This was then added to when Polestar and Hertz (HTZ) announced a deal in April for Polestar to supply up to 65,000 EVs to Hertz over five years. Those deliveries are now commencing.

"We’re excited to add this first delivery of Polestars to our fleet, expanding the opportunities for Hertz customers to enjoy the experience of driving an electric vehicle," says Darren Arrington, executive vice president of revenue management and fleet acquisition for Hertz.

The SPAC deal to take Polestar public will raise close to $850 million and comes at a challenging time for EV stocks and the broader stock market in general. Polestar has plans to launch its first EV, the Polestar 3, this fall in the US.

A sudden spike in volatility has seen a recovery in advance of the merger vote being passed. The EV space is challenging and getting more difficult to trade. I have been long GGPI stock for most of 2022 but cut the position when markets turned sharply lower. My overall view on the EV space remains challenged given the macroeconomic conditions, supply chain issues, and geopolitical tensions. I do like Polestar for the long term, but it faces a long, rocky road ahead.

Technically, $12 is a high-volume resistance area. This news has been a recent catalyst, but the stock may quiet down once the news flow returns to normal. 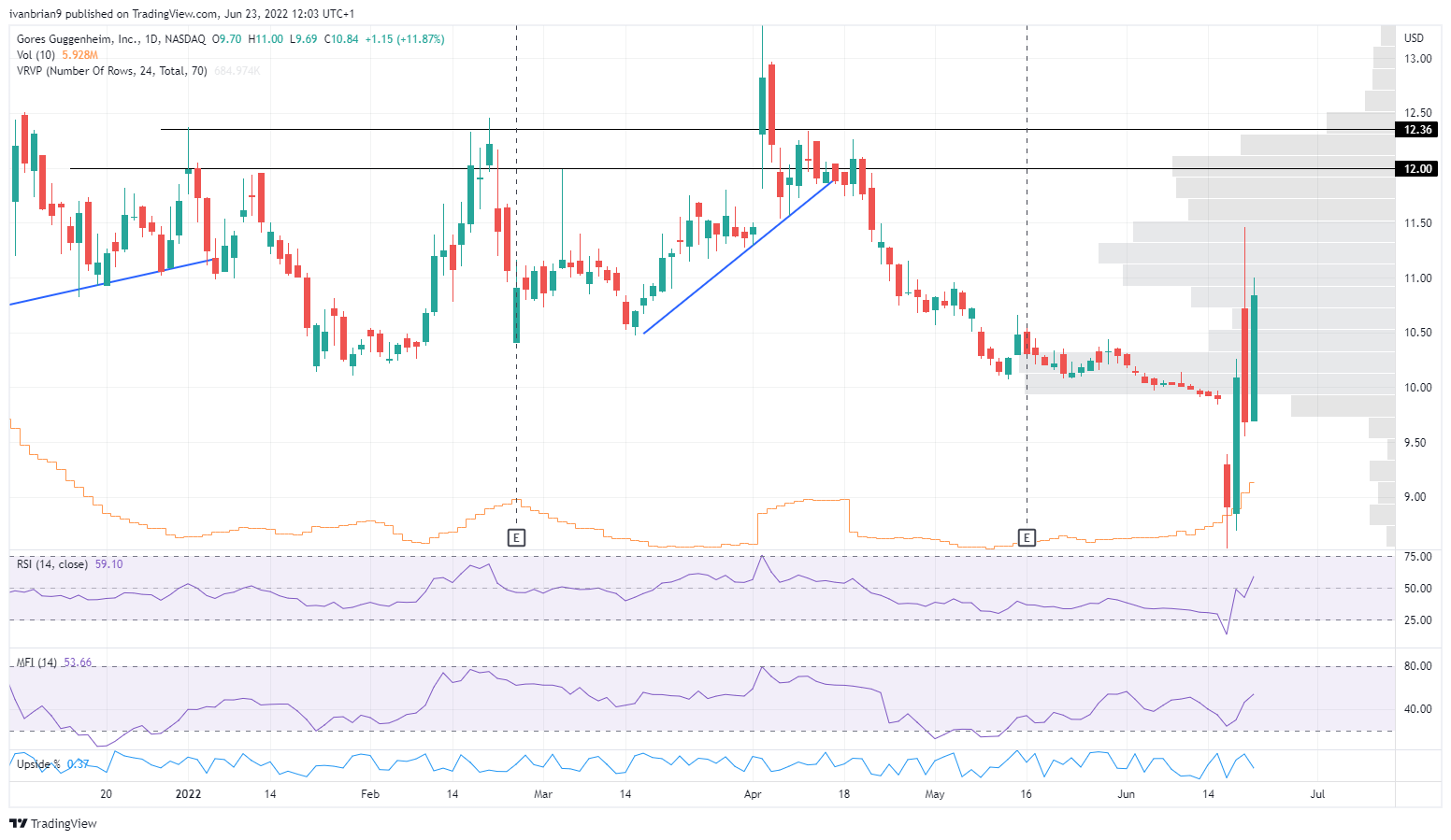 Update: GGPI ended Thursday at $11.23 per share, up 3.6%. Wall Street managed to change course ahead of the close and finished with gains after a soft start to the day. The Dow Jones Industrial Average added 194 points, while the S&P 500 added 0.95%. The Nasdaq Composite was the best performer, up 1.62%. The market mood soured ahead of Wall Street's opening, following the release of the flash S&P Global PMIs, which showed a generalized economic slowdown at the end of the second quarter. The manufacturing and services indexes mostly missed the market's expectations in Europe and the US although they remain in expansion territory.

At the same time, US Federal Reserve Chairman Jerome Powell testified before the House Financial Services Committee on Monetary Policy and the State of the Economy. Fed’s head said that a big part of inflation won’t be affected by the central bank’s tools, although another part will be. On a positive note, he added that growth this year should still be fairly strong, but his comments clearly reflect concerns about inflation and growth, as he repeated that it would be  "very challenging" to ensure a smooth landing.

Update: GGPI shares are strangely unenthused by the official merging of the SPAC with Polestar. GGPI shares have lost 3% in the first leg of trading on Thursday. Shares are down to $10.52 at the time of writing. This is happening even as the Nasdaq has gained 0.9% in another decent day for the week. GGPI officially merges with the Chinese-owned, Swedish-headquartered EV manufacturer tomorrow and will from then on trade as PSNY, which is why shares advanced 12% on Wednesday. Now it seems that investors are paring gains after the quick run-up. "The listing on the Nasdaq will help Polestar achieve its plans for rapid growth, anchored by its key values of design, innovation and sustainability," said the companies in a joint press release this morning. "With two award-winning cars on the road in 25 markets, Polestar plans to increase sales volumes tenfold from approximately 29,000 cars in 2021 to 290,000 in 2025."

The author is short Tesla.