The Gold Price is higher by some 0.18% and has moved back to challenge the $1,900 round number in recent trade. The US dollar is bid and capping the yellow metal despite the risk-off sentiment in markets. The greenback as measured by the DXY was up for a fourth straight day on Tuesday, smashing through to the highest level since March 2020, and is now up nearly 7% on the year.

A combination of risk-off themes are roiling markets this week, stemming from the Chinese lockdowns and negative implications for world trade at a time when NATO is on the brink of war with Russia. It is a 'sell-everything' day on Wall Street, with stocks in a sea of red. Meanwhile, data showed US Consumer Confidence edged lower in April. Additionally, the Atlanta Fed Gross Domestic Product nowcast estimate for the first quarter growth was revised sharply lower to 0.4% from 1.3% on April 19. The next update is on Wednesday, the final estimate before the Bureau of Economic Analysis releases its advance reading of Q1 GDP on Thursday.

Worries around China’s coronavirus outbreak maintain investors’ unease. Lockdowns in Shanghai and news of the spread to some districts of Beijing threaten to spur another raft of inflation courtesy of supply-side disruptions. Meanwhile, the People’s Bank of China (PBoC) continues to implement stimuli to the Chinese economy in its attempt to contain an economic slowdown.

In the meantime, the Russo-Ukraine tussles have taken a backseat of late. However, expressions by the Russian Foreign Ministry Lavrov saying that the risks of a nuclear war are “serious,” summed up the already dampened market mood.

Gold Price bias is still tilted to the upside, but a break below $1890 would clear the way for a fall at least to the 200-day moving average (DMA) at $1832.75, though a test to $1800 is on the cards. Something worth noting is that the RSI is at 39.23, in bearish territory and with enough room to spare before reaching oversold territory if XAUUSD bears like to drag prices lower. 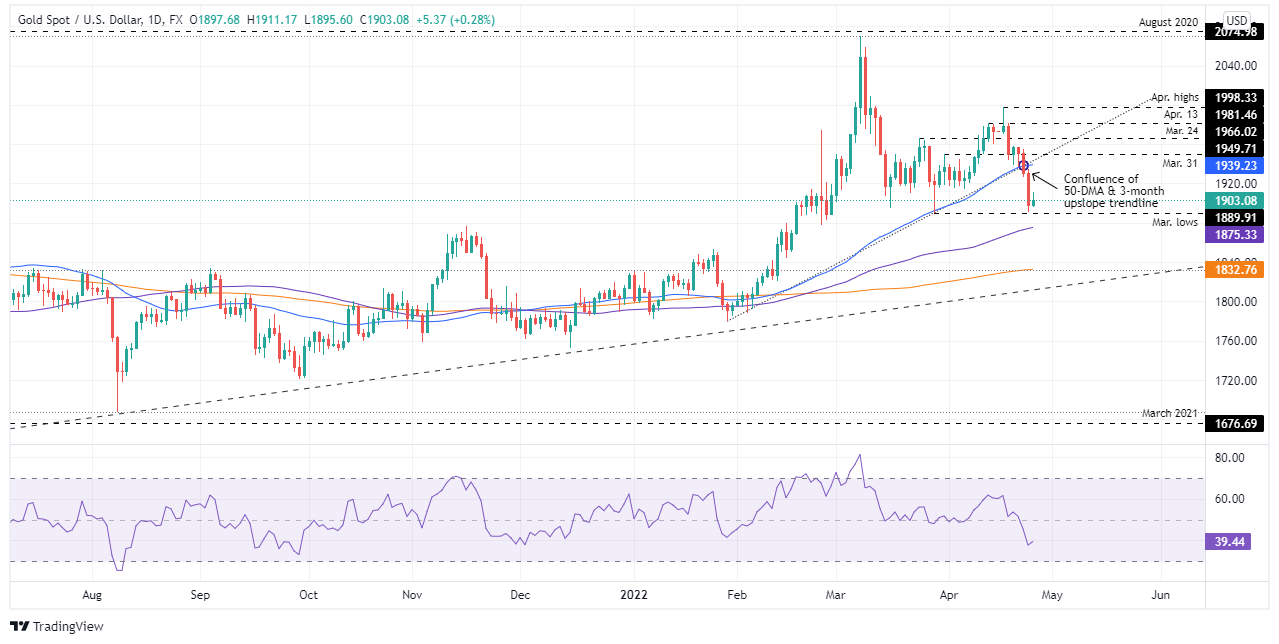