The price of gold has soared on the back of a move by the bears in the US dollar on Wednesday. XAU/USD is rallying to $1,662.78 the high for the day so far after printing a fresh bear cycle low of $1,614.92 in mid-London morning trade.

The jump in the gold price came about when the US dollar fell sharply from a 20-year high, easing pressure on gold in what has been described a month-end fixing model. There are still plenty of fundamentally sound reasons for a recovery in gold as it is seen as a safe haven at times of geopolitical tensions. Additionally, the US treasury yield also fell after climbing to the highest since January 2008. The yield on the US 10-year note was last seen down 24.2 basis points to 3.705%, after earlier touching 4.01%, the first rise above 4% in nearly 15 years while money markets girded for higher interest rates that could possibly remain for longer than anticipated.

However, in recent trade on Wednesday, US traders piled into the stock market as the yield on US Treasuries came off decade highs that in recent sessions made interest rate-sensitive companies less attractive to investors. The tumble in yields followed the Bank of England's intervention into the UK's gilt market when it said it would buy long-dated British bonds in a move aimed at restoring financial stability in the wake of the new UK Government’s mini-budget, which had triggered a sharp sell-off in UK gilts.

In turn, the greenback has crumbled from a fresh 20-year high scored ahead of the New York open at 114.778 before falling to the current low of 112.561. The move has dug into a lot of long positioning into other currencies vs. the US dollar this week which has led to a cascade of market orders being triggered along the way, propelling gold and the pound higher.

''While this policy is under the umbrella of financial stability, it effectively amounts to undertaking temporary quantitative easing (ie policy easing), at a time when the Monetary Policy Committee is trying to contain rampant inflation,'' analysts at ANZ Bank said, adding, ''it’s therefore difficult to see how the BoE can deliver anything less than a 100bp rate hike at their November meeting.''

Nonetheless, analysts at TD Securities argue, ''we still see the risk of capitulation growing for the yellow metal. With prices trading below pandemic-era levels, a small number of family offices and proprietary trading shops are increasingly feeling the pressure to finally capitulate on their massively bloated and complacent length in gold.''

''Rates markets are pricing the potential for higher interest rates to persist for some time, and a steady stream of Fedspeak is likely to hammer this point home.''

In this regard, we heard from Fed speakers Charles Evans again on Wednesday as well as Ralph Bostic. ''The Federal Reserve is raising interest rates expeditiously to address very high, persistent inflation, and will likely get US short-term borrowing costs to where they need to be by early next year,'' Evans said. ''Most Fed policymakers are penciling in a top Fed policy rate of 4.5% to 4.75% by end of next year, based on their projections published last week, and "by March we will be at that point," Evans added at an event on current economic conditions hosted by the London School of Economics. Meanwhile, Atlanta Fed President Raphael Bostic said on Wednesday that ''the lack of clear progress on inflation means the Federal Reserve needs "moderately restrictive" interest rates that should reach a level between 4.25% and 4.50% by the end of this year.''

The Federal Reserve has aggressively hiked interest rates by 3 percentage points this year, taking its target range to 3.00%-3.25%. It carried out its third consecutive 75 basis point increase last week and signaled that rates are likely to rise to the 4.25%-4.5% range by the end of the year. 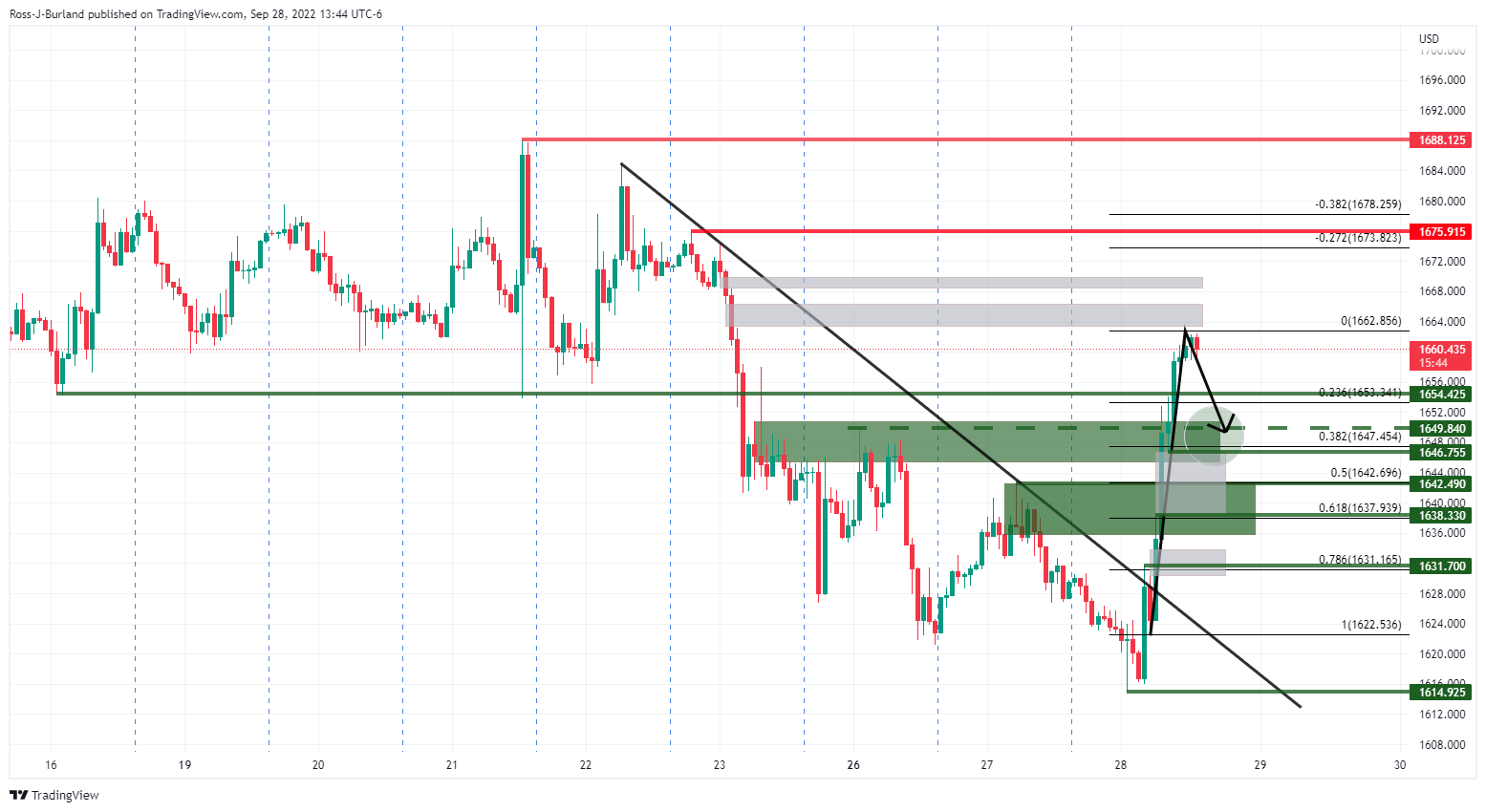 The gold price has shot through the week's high of $1,649 and now eyes Friday's high at $1,675. On the downside, a correction to Monday's highs will have a confluence with a 38.2% Fibonacci level that guards the price imbalances, the greyed areas on the hourly chart above.