Gold Price stabilize in the $1,910/20 price zone after reaching an intraday low of $1,907.04 right after Wall Street’s opening. Stocks hold on to gains, despite US government bond yields picking up and nearing the multi-week highs reached earlier in the day. Market participants maintain their eyes on the Russia-Ukraine conflict, as Moscow has just announced sanctions on US President Joe Biden and several members of its cabinet, also hitting the CIA director. XAUUSD recovery seems a corrective bounce, as the price held so far below a relevant Fibonacci resistance level at $1,925.20, with another leg south in the cards as long as the spot Gold Price remains below the latter.

Meanwhile, crude oil prices are in a free-fall, with the barrel of WTI now trading at around $94 a barrel. Concerns about diminishing demand within the Eastern European crisis and the latest COVID-19 breakout in China and Europe, dampening hopes for a steady economic comeback from the pandemic collapse.

US indexes opened with substantial gains, opposite to their overseas counterparts, most of which are in the red. The sour tone of European equities could be explained by the latest coronavirus outbreak in China, which led to a massive lockdown in the country. Speculative interest is now expecting slower economic progress and a decreased demand for commodities coming from the country. It is worth noting that some European countries are also experiencing a covid-19 outbreak, overshadowed in the headlines by Moscow’s attack on Kyiv.

Higher US indexes are putting a cap on the dollar’s appreciation, which is currently down across the FX board. Additional pressure on the greenback comes from US government bond yields. Earlier in the day, the yield on the 10-year Treasury note hit an intraday high of 2.169%, a fresh multi-week high. It later receded to the current 2.08% amid the Producer Price Index coming in as expected in February, still at 10% YoY. Volatility is the result of uncertainty related to the US Federal Reserve monetary policy decision, to be revealed on Wednesday. The central bank has anticipated a 25 bps rate hike, but odds for a 50 bps hike are on the table as annual inflation hit a record of 7.9% YoY in February, its highest in forty years.

At the same time, market players maintain an eye on the Russia-Ukraine crisis. An adviser from Ukrainian President Volodymyr Zelenskyy said that they are hopeful they will reach a diplomatic solution early in May at the latest. In the meantime, Moscow’s attacks on major Ukrainian cities continues with thousands of civilian casualties. As a result, the US has announced more sanctions on Russian and Belorussian individuals.

Also read: Gold is trending lower – A break below 1910 is a sell signal [Video]

XAUUSD is currently trading below the 50% retracement of the January/March rally at $1,2925.20. Gold Price is down for a third consecutive day and biased lower according to technical readings in the daily chart, which shows that technical indicators are heading south almost vertically and already piercing their midlines.

The 61.8% retracement of the mentioned advance comes at $1,890.64, providing static support. A break below the latter should send the bright metal into a selling spiral that could extend toward the 1,800 figure in the upcoming days.

There are no technical signs of bearish exhaustion, which suggests that intraday recoveries should continue to attract sellers. A near-term resistance level is located at $1,935.50, while a more relevant one is the $1,960 price zone, where the metal has the 38.2% retracement of the aforementioned rally. 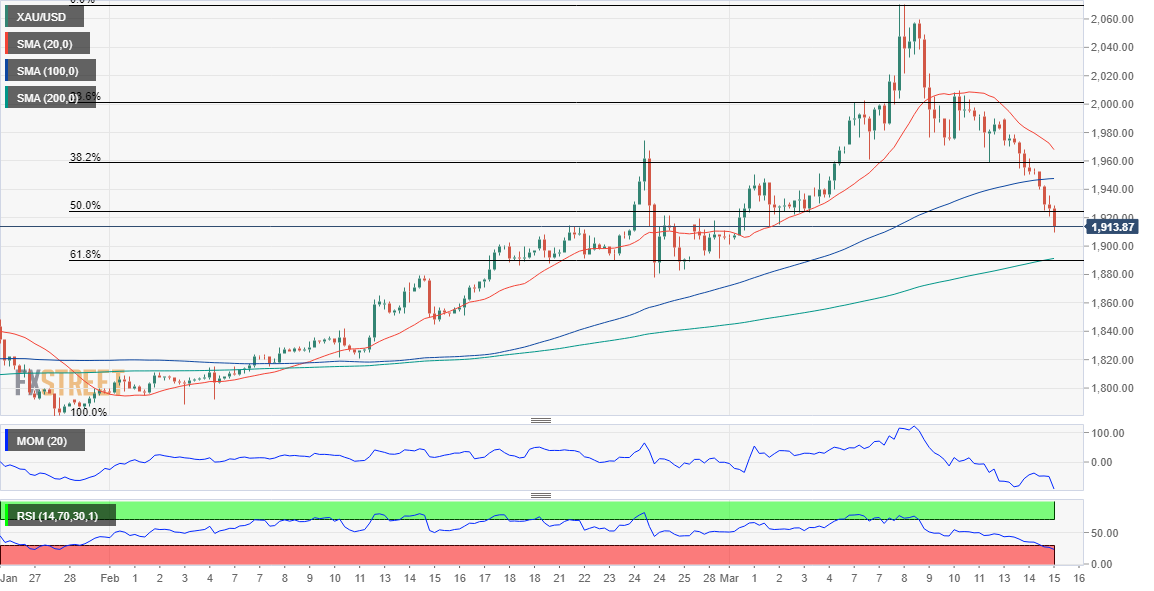