Gold (XAU/USD) looks to extend its recent bullish momentum starting out a fresh week amid hopes of additional fiscal stimulus under US President-elect Joe Biden. Biden is a presumptive victor, as the legal challenges by the Trump campaign remain.

Markets also cheer the prospects of continuity of the current policy environment even on a divided government, with Republicans taking hold of the Senate. The upbeat market mood continues to dimmish the US dollar’s attractiveness as a safe-haven. However, the gains in the global stocks and rising coronavirus cases could likely limit the upside in the metal. Let’s see how gold is positioned on the charts.

The Technical Confluences Indicator shows that the yellow metal remains on track to test the critical resistance at $1965, which is the pivot point one-month R2.

Ahead of that level, the confluence of the previous day high and Bollinger Band one-hour Upper at $1961 could challenge the bulls’ commitment.

Should the XAU bulls recapture the $1965 hurdle, the next upside target is seen at $1975, which is the intersection of the pivot point one-day S2 and Bollinger Band four-hour Upper.

Alternatively, a stack of healthy support levels is found $1953-51 levels, which could continue to guard the downside.

Acceptance below the SMA10 four-hour at $1950 is needed to fuel a corrective decline towards $1947, the convergence of the Fibonacci 61.8% one-day and Bollinger Band one-day Upper.

The next downside target is aligned at $1940, where the Fibonacci 23.6% one-week awaits.

The $1934 strong support, the previous month high, will be a tough nut to crack for the sellers. 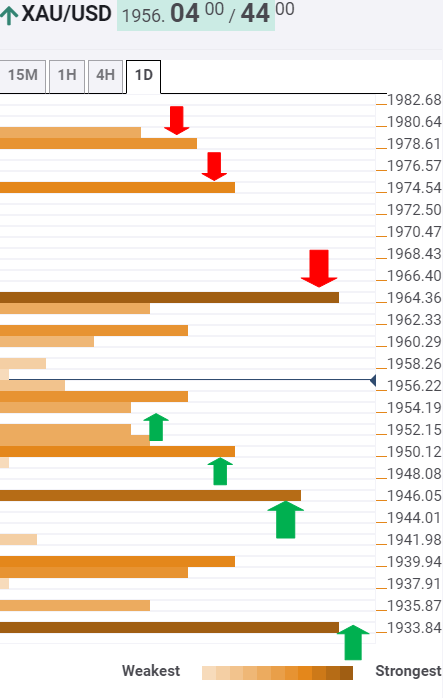