Update May 19: GameStop Corp. (NYSE: GME) has kicked off Wednesday's session with a slide of roughly 3%. While that is greater than the decline in broader markets – the S&P 500 Index is down 1.4% – it is a relatively moderate fall for GME. The poster child or meme stocks is experiencing stability. It is holding onto most the gains it achieved in May as the firm ventures in eCommerce. The moves in GameStop are also minuscule in comparison to the crash in cryptocurrencies, which sent Bitcoin to $30,000 before a sharp bounce.

NYSE:GME investors continued to experience heightened volatility this week, as the king of the meme stocks traded as low as $138 and as high as $166 over the past five days. On Friday, shares retreated from the sympathy surge on Thursday, and closed the turbulent week at $159.92, despite the broader markets rallying. GameStop investors are still exhibiting their "diamond hands" by holding the stock until further clarity on Ryan Cohen’s eCommerce vision has been revealed.

Some of those diamond hands may not be as strong as they were a few months ago, now that the Reddit short squeeze saga has more or less come to an end. In fact, some are attributing the recent volatility to a large migration of retail money moving from equity markets to the crypto markets in hopes of hitting it big with a surging altcoin. The Dogecoin movement has been a major catalyst, especially after Tesla (NASDAQ:TSLA) CEO Elon Musk showed his support for Dogecoin over Bitcoin last week on Twitter. The venn diagram of GameStop investors and Dogecoin investors has a lot of overlap, and the recent surge may just be another reason stocks like GameStop are exhibiting such low trading volume and high volatility. 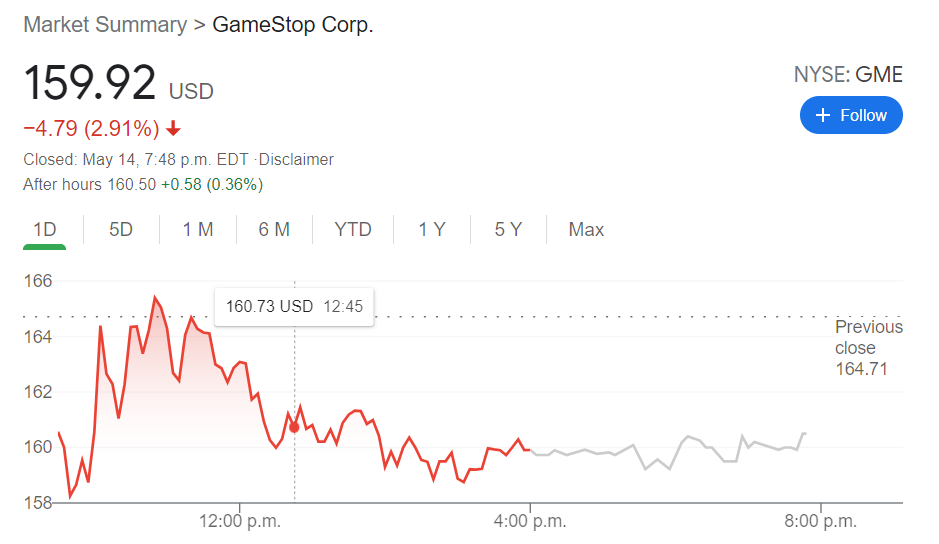 Meanwhile, GameStop’s second fiddle AMC (NYSE:AMC) finished in the green for the sixth consecutive trading session, as Redditors took notice of the mounting short volume that has been building up. For now, it seems like AMC has replaced GameStop as the short squeeze of choice amongst Reddit investors, and it could have to do with its more affordable stock price and clearer path to a return to normal once the pandemic is over.

Update: GME shares rallied hard on Monday as Bitcoin woes saw retail money flow from one asset back to the meme stock space. GME, AMC, PLTR and others all saw decent gains on Monday. Bitcoin is trying to hold $45,000, and if it succeeds then money may be attracted back to the crypto space and see meme stocks suffer again.

Update May 18: GameStop Corp (NYSE: GME) has been sliding in Tuesday's early trading, falling by some 5% to around $171 at the time of writing. Shares of the videogaming company are roughly halfway between Friday's close at around $160 and Monday's, just above $180. This is a classic 50% Fibonacci correction which maintains the uptrend for the poster child of meme stocks.