Update February 1: GEVO shares have fallen back from a peak over $14 on January 27 to trade at $10.24 at the time of writing. The stock offering was priced at $8 per share. GEVO announced that its Net-Zero 1 would produce approximately 45MGPY of liquid hydrocarbons and 350 million lbs a year of high protein animal feed. GEVO says it has enough cash to fund 100% of the equity investment neded for Net-Zero 1.

Update: Gevo Inc (NASDAQ: GEVO) has soared by 25.98% on Monday, closing at $13.24 after hitting a 52-week peak of $14.50. Tuesday's premarket trading data is pointing to a decline of around 2% to just under $13, much-needed profit-taking. The biodiesel and renewable chemicals firm benefited – and may still gain ground after the correction – from three factors. First, Frances Arnold, Gevo's co-founder, has been appointed to President Joe Biden's Science Team. Second, the firm completed a financing round worth $350 that should boost its arm chest. Third, Poe Fratt of Noble Capital Markets, set a target price of $16 – nearly double his previous call. That still leaves GEVO room to run.

Update: President Joe Biden has been moving swiftly to make good on his climate goals – and Gevo Inc (NASDAQ: GEVO) has been quick to cash in on its rapid ascent. Shares of renewable energy are up over 23% on Monday, hitting a high above $13 – and more than tripling since 2021 began. Back in the autumn, stocks traded at only $1. Investors are shrugging off Gevo's announcement on Monday that it has closed its previously announced $350 million in share offering. H.C. Wainwright & Co, CitiGroup,, Stifel and Roth Capital Partners were all involved in the financial move. The purchase price was only $8, providing investors a handsome profit. President Joe Biden is set to deliver a speech on American manufacturing later in the day.

Update: Gevo Inc (NASDAQ: GEVO) is set to surge by nearly 20% on Monday according to premarket data. The Englewood, Colorado-based company would see shares reach $12.60, a new 52-week high. The biofuels and renewable chemicals firm is set to be a substantial beneficiary from President Joe Biden's climate push. The new Commander-in-Chief is set to deliver remarks on American manufacturing later on Monday, calling for higher investment. The combination of green goals and local investment is music to Gevo investors' ears. Is the stock nearing overbought territory? Looking at the recent past, the meteoric surge may result in a correction. However, zooming out a few years, shares stood at much higher levels and the company is worth only around $2 billion – so there may be room for more gains.

NASDAQ:GEVO has been one of the early winners from the new Biden administration being in the White House as the stock has vaulted from penny stock darling into a company with over a $1 billion market cap. On Thursday, shares rebounded from a Wednesday selloff and added 7.27% to close the trading session at $9.30, with a trading volume of over 62 million shares which is more than double the daily average. GEVO has now surged by over 118% since the start of 2021, and as can be expected when a stock rises that much in a short period of time, the company raised a public stock offering to capitalize on the soaring price.

Another catalyst for the recent success of GEVO’s stock is that co-founder and Nobel Prize Winner Frances Arnold has been named to President-elect Biden’s official White House Science team. That is an incredible honor and points towards the work GEVO is doing in the field of alternative energies, something the Biden administration has openly stated is a focus during the next four years. While it does not necessarily mean that GEVO is primed to soar from here on out, it certainly does not hurt for the co-founded of the company to have the direct ear of the President. 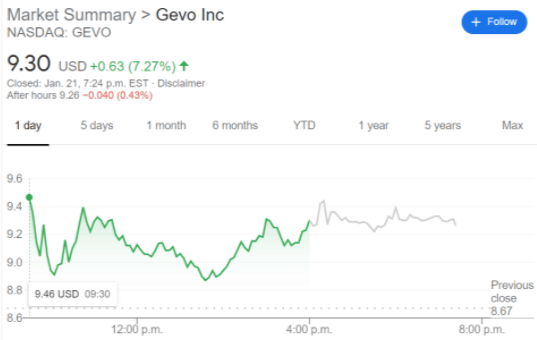 After a recent upgrade from Noble Capital analyst Poe Fratt, he went on to say that he expected GEVO to announce some important progress on its Net-Zero 1 project in South Dakota. The signs are all consolidating and pointing upwards for GEVO, so it should be no surprise that investors are beginning to get in now before shares take off.

EUR/USD remains depressed below the 1.1600 threshold

EUR/USD struggles to regain the 1.1600 level after falling to a fresh weekly low of 1.1580. The dollar benefited from solid US macroeconomic data but softer yields capped its gains.

GBP/USD advanced to a daily high of 1.3830 during the European session but reversed its direction in the second half of the day. Fading BOE rate hike expectations and Brexit-related headlines weigh on the pound.

Gold losing its shine and the 1,800 threshold

Gold edged lower on Wednesday, trading as low as $1,782.31 a troy ounce. The greenback strengthened ever since the day started against its commodity-rival, getting a boost early in the American session from upbeat US data and rallying equities.

Small correction ahead of cryptos before next leg up

BTC struggles cross above the Tenkan-Sen, could create profit-taking and a corrective move. ETH breaks out above a bullish continuation pattern, but momentum is weak. XRP continues to lag BTC and ETH but is poised to catch up in relative performance.