Update: Gamestop (GME) shares halved from early highs on Monday. Early in the session, GME peaked at $159.18 before tumbling to near $70 at the time of writing. GME has been in a frenzy for the last few trading days with huge retail interest and trending on multiple internet discussion boards. GME was brought into the mainstream media with analysts on CNBC and Bloomberg repeatedly discussing GME.

Is the short squeeze over?

Goldman Sachs on Monday warned about bubble valuations in 39 stocks. Many stocks with a high short interest began to trade aggressively lower this week.

Update: Gamestop (GME) shares continue to be highly volatile on Monday. GME shares traded above $136 during Monday's pre-market, before falling back to open the regular session at $96.73. Gamestop was the top stock trending on Monday with CNBC, Bloomberg and multiple other news sources commenting on the wild ride.

Trading in Gamestop (GME) was halted to the downside early on Monday as volatility circuit breakers were triggered, but GME moved higher on resumption breaking back above $100, finding short-term technical support at $86.

Gamestop (GME) has probably been the most talked-about stock of 2021. Shares in Gamestop (GME) are up nearly 400% for 2021! Yes, you read that right: nearly 400% in three weeks! GME has been the number one topic on the /wallstreetbets Reddit site which has nearly two million members.

Gamestop (GME) is a video game and consumer electronics retailer with a global network of stores selling new and second-hand video games and related products. Shares in Gamestop (GME) suffered in the early stages of the pandemic last March but recovered strongly as investors saw potential from stay-at-home gamers and the new Playstation 5 and Xbox releases. GME closed out the year at $18.84.

GME stock price: Institutional versus retail investors battle it out

Citroen research tweeted last week that the stock was too high and put a $20 price target on GME. This drew a lot of attention from retail investors as Gamestop (GME) continued to push higher. GME was has been discussed multiple times on CNBC last week and it has been featured again on Monday, being the “hottest” stock of 2021.

Must Asset Management CEO told Bloomberg on Monday that the fund had turned “less bullish” and “more neutral” on Gamestop (GME). Must Asset Management is one of the larger Gamestop holders with a near 5% stake. The CEO said the fund still thinks Chewy (CHWY) co-founder Ryan Cohen can bring success to Gamestop.

2021 to infinity and beyond

Gamestop (GME) announced in early January that Chewy co-founder Ryan Cohen and two other Chewy executives would be joining GME’s board. Cohen reportedly wants to push Gamestop (GME) to adopt a more online strategy and now with three board seats, he can target this goal more aggressively.

Gamestop was a well-shorted stock with 68 million shares shorted as of Dec 31, 2020. According to the Wall Street Journal, 138% of the shares were sold short. This kind of massive short-selling can happen, as shares can be loaned by holders more than once. Once the stock started to rally, this short squeeze added to panic buying and the stock rallied 57% on Jan 13. The stock was also popular among the /wallstreetbets reddit community, which numbers nearly 2 million users.

While a short squeeze can make for huge moves, the underlying fundamentals of the stock have not changed. Gamestop reported in January that revenue for the nine-week holiday shopping season was up 3.1% from a year earlier. SEC documents showed three directors sold stock totalling $2.7M while one director sold stock for a total value of $17M. GME stock has remained unfazed by these developments and continues marching on. GME shares traded above $136 in Monday's pre-market.

Gamestop smashed through its record high on Friday, trading above $63. This old high goes back to December 2007! All indicators will be showing overbought readings but technical analysis indicators are lagging too much in such a fast and aggressive move. Closing above the old high from 2007 is technically bullish and the stock has certainly taken that bullishness in Monday's premarket trading. At the time of writing GME is trading at $95 having stormed above $136. 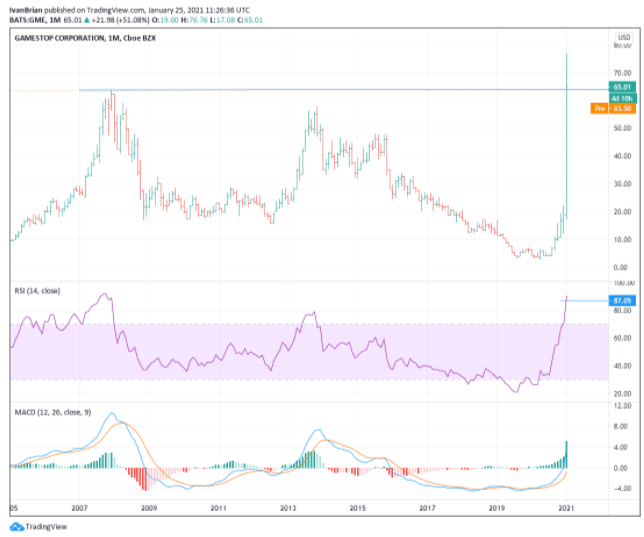 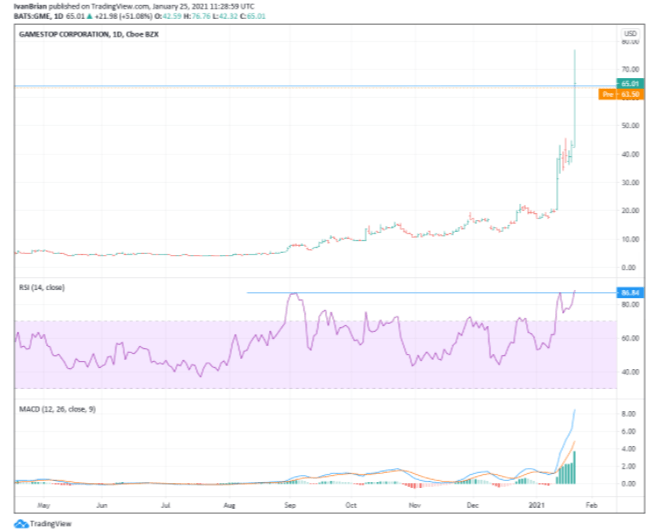