Exxon Mobil (XOM) reported earnings before the open on Friday with an unsurprising beat on both metrics. We say "unsurprisingly" given the developments in the oil price last quarter and the strong track record of oil companies beating estimates. This trend has been due to surging energy costs once the pandemic lockdown ended and the price of oil surged. While recent concerns over a global recession have been heightened following the surprise US GDP decline reported on Thursday, this can be offset by the lack of investment in supply going back many years. Governments have been pushing for green energy solutions, and that has meant oil companies have opted for share buybacks instead of investments in the oil industry. Now that decision is likely to support oil prices despite an economic slowdown.

"Earnings and cash flow benefited from increased production, higher realizations and tight cost control," said Darren Woods, chairman and CEO. "Strong second-quarter results reflect our focus on the fundamentals and the investments we put in motion several years ago and sustained through the depths of the pandemic."

Of particular note is the near doubling of free cash flow (FCF) from $13.8 billion to $27.7 billion versus a year earlier. Also of note is the average oil price used of $107.78. Currently, WTI Crude is trading at $98.70, so next quarter will be affected if oil prices remain at lower levels.

You are basically trading oil here! The chart below shows XOM stock versus WTI over the past three years. You do get a nice 4% dividend, however, which you do not get from trading oil! 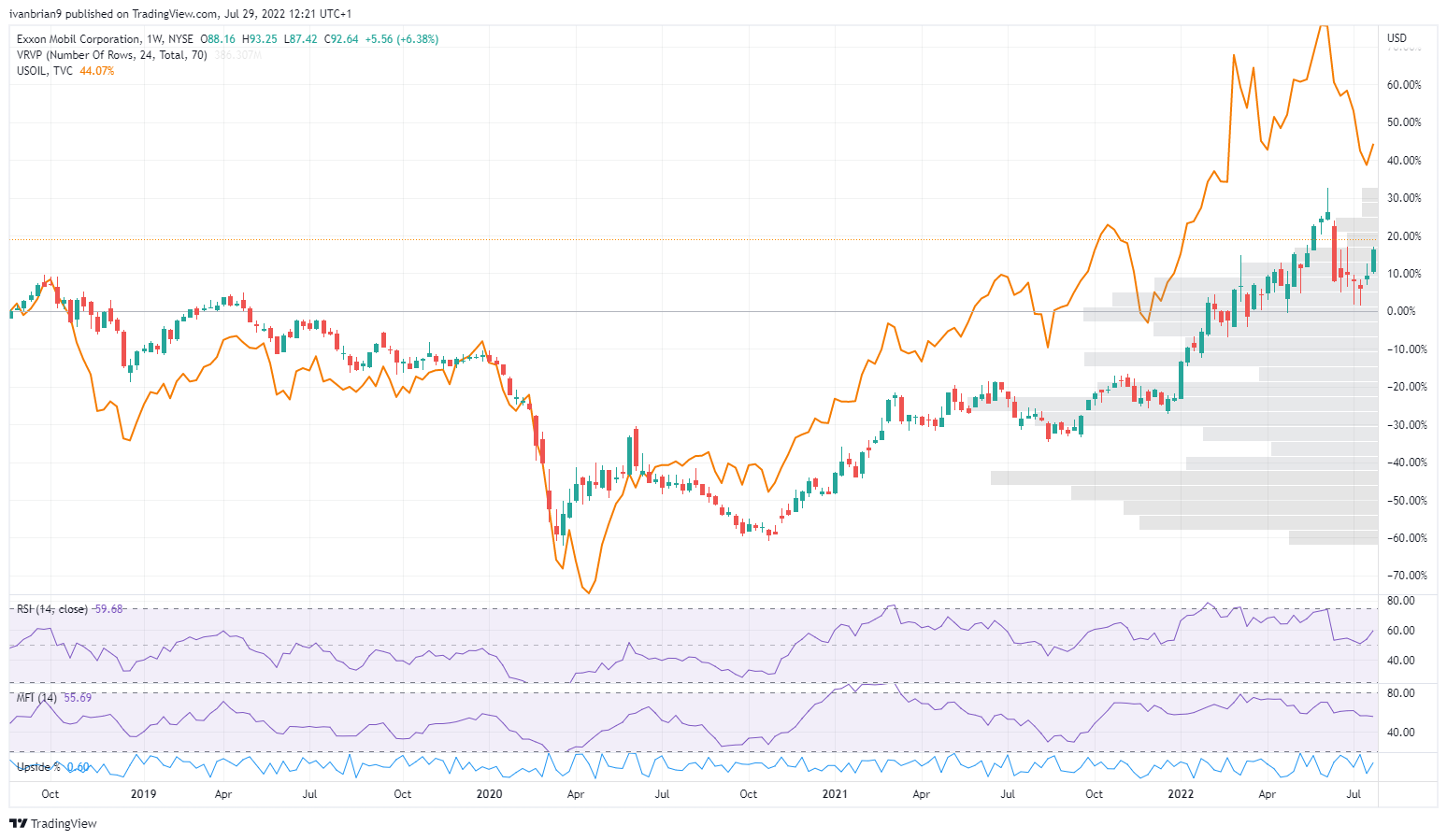 Oil is in a 2-year uptrend since the pandemic nadir to below $0. The problem back then was a unique one. A massive global collapse in demand meant storage was the only game in town. With storage full, speculative longs were caught and had to dump oil futures in case they got caught with physical delivery. Nothing like a few hundred barrels of oil showing up at your hedge fund reception to bring a dose of reality to proceedings. Since then the world has opened back up, and we want oil and lots of it. Then Russia invades Ukraine and a ban on Russian oil takes one of the biggest suppliers out of the market. Since that spike, things have calmed down as the global oil market prices are in a global recession, but oil remains underpinned by a lack of supply. As mentioned Russia is out of the western oil market, years of underinvestment by the oil majors are now coming home to roost, and governments have been focused on greener alternatives.

Oil has pulled back but has found strong support from the 200-day moving average. This has held it up well and worked at a strong level. A break and oil will likely fall to $70. There are still a lot of speculative longs here, but that should be strong support. It is just short of pre-pandemic 2019 levels at $60. Everything else seems to be retracing to pre-pandemic levels, but with oil investment lacking, we think it unlikely oil retraces back so far. All this means for XOM is that pre-pandemic levels were $70. This is a strong support zone, but with buybacks, dividends and lack of supply we would expect that level to be a huge buying opportunity if ever tested. 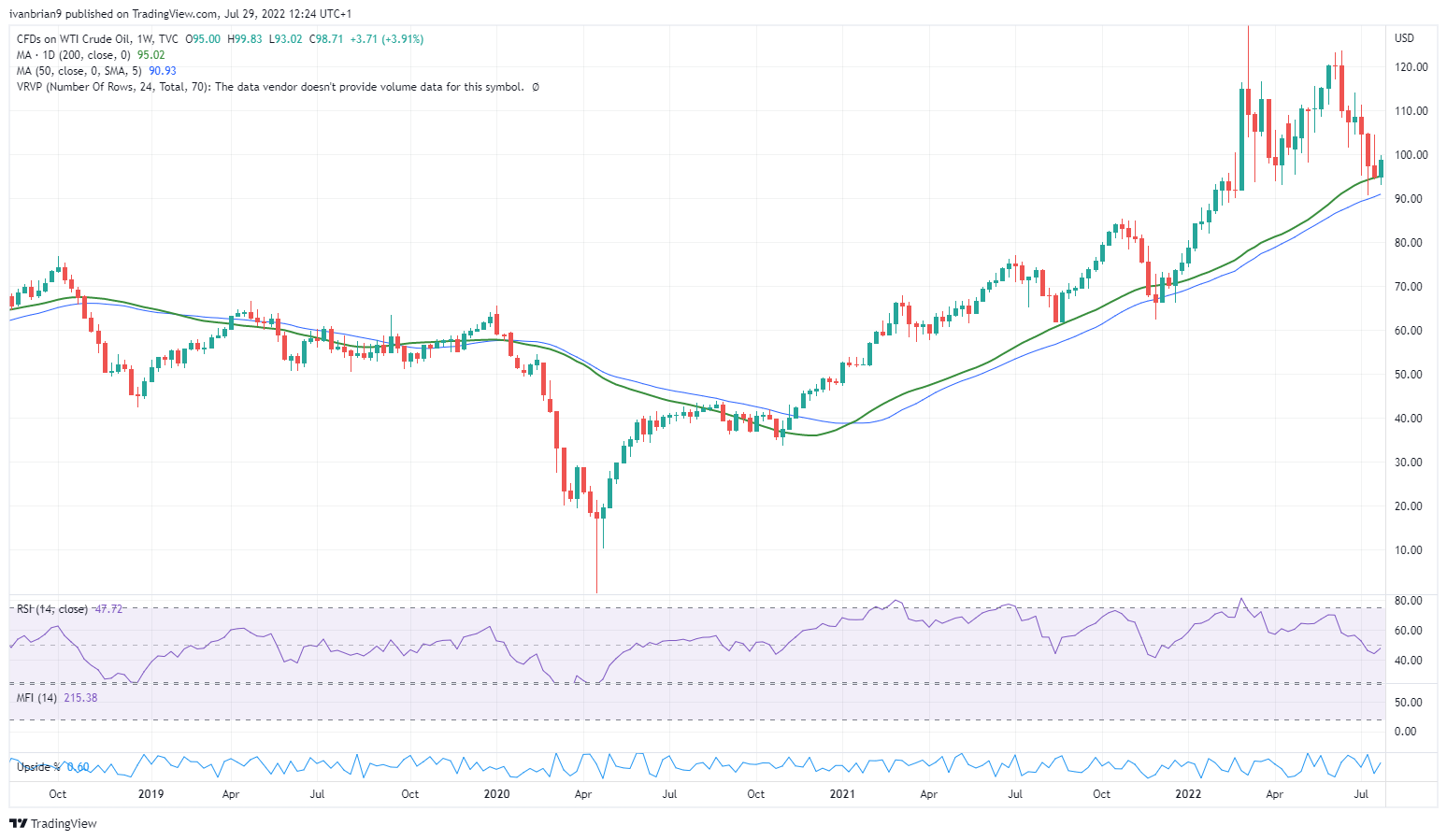 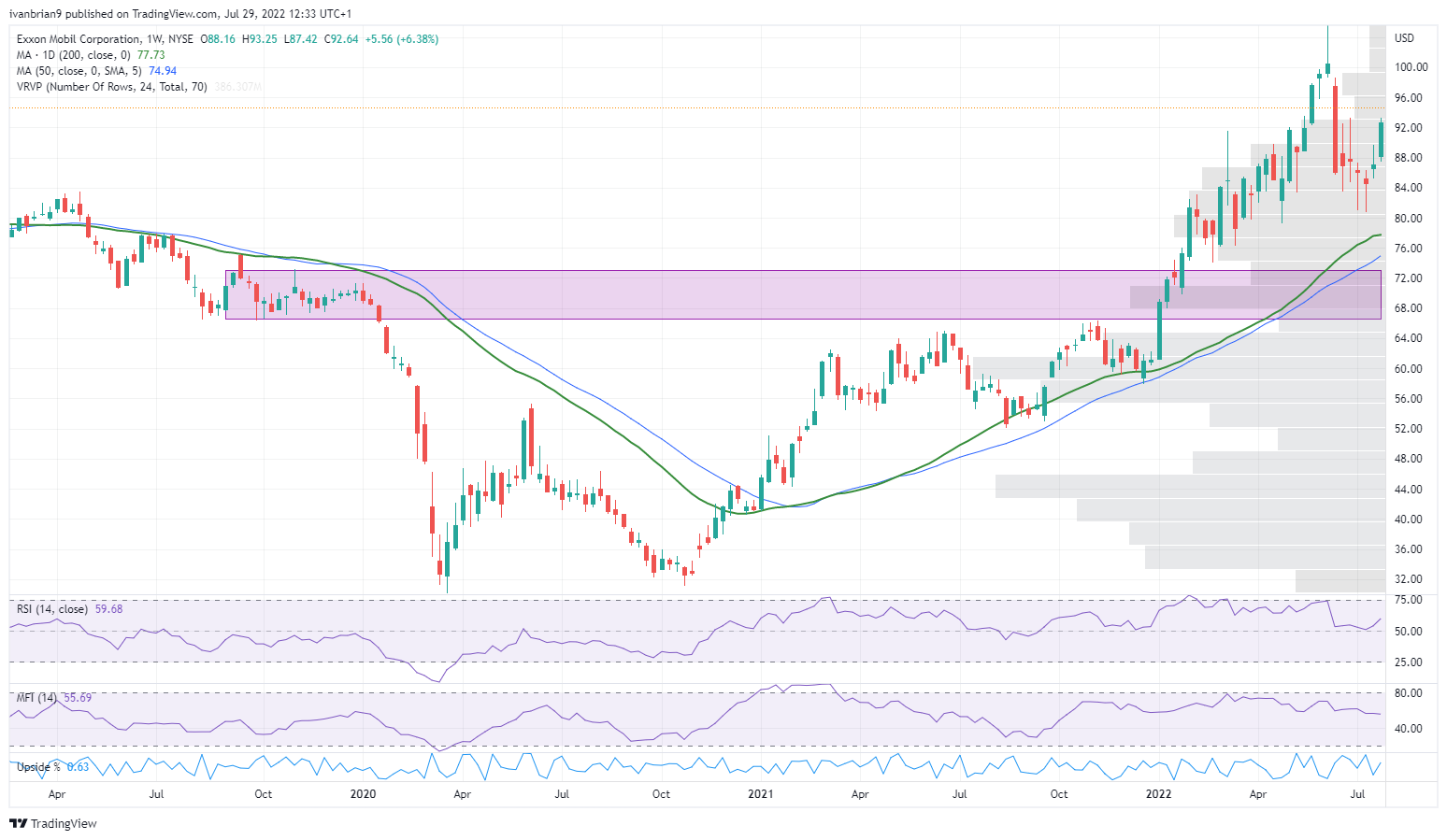