NYSE:CCIV has been fueled by rumors of an impending shareholder vote that will likely bring Lucid Motors public much sooner than many anticipated. On Tuesday, shares of CCIV surged by 9.33% to close the trading session at $21.56, as the SPAC stock broke through its resistance at both the 50-day and 200-day moving averages. CCIV has definitely taken a bullish outbreak over the past couple of weeks, and since the recent May 13th low, shares have gained 25% as investors have once again rallied behind the beloved retail stock that some believe will be a Tesla (NASDAQ:TSLA) challenger in the future.

The recent news that Rivian, the electric truck company that is backed by Amazon (NASDAQ:AMZN) is raising funding and seeking a valuation of close to $70 billion. The figure caught CCIV investors off guard as the inflated valuation of Lucid Motors was one of the main reasons the stock crashed in February. Of course, RIvian and Lucid are going public via different IPO methods, but the initial valuation for Rivian is higher than established EV brands like Nio (NYSE:NIO) and even Ford (NYSE:F). Bullish Lucid investors have been active on social media, pumping Lucid’s current valuation as a bargain compared to what Rivian may fetch. 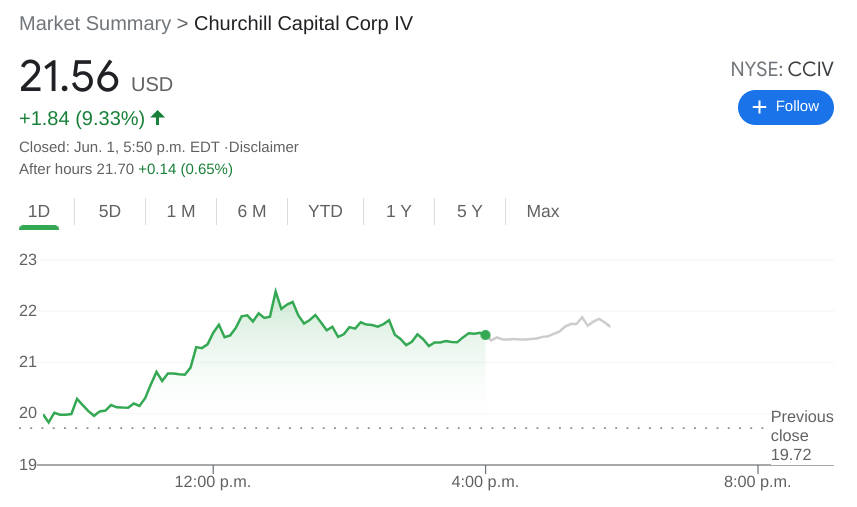 SPAC IPO stocks have weakened over the past few months as an anticipated regulatory crackdown by the SEC, as well as a rotation out of growth stocks have sent the sector tumbling. On Tuesday, one of the more anticipated SPACs completed its merger and SoFi (NASDAQ:SOFI) began trading on the NASDAQ exchange. SoFi gained 3.10% on its first day of trading, which may be a positive sign for CCIV when it eventually changes its ticker symbol to LCID.