The Reserve Bank of New Zealand has hiked the Official Cash Rate by 50 bps to 2% and the markets are now on the lookout for the pace of future tightening for which the Monetary Policy Statement, (MPS), will potentially shed some light.

''With fears of a hard landing at the core of what’s eating away at risk sentiment, as we’ve been saying for a while, if the RBNZ can strike the right balance between “we’ve got this” on inflation while signalling that it is cognisant of recession risks (not an easy job) while also preserving optionality, that’d likely be positive for the Kiwi,'' analysts at ANZ Bank said

All but one of 21 economists in the Reuters poll forecast the Reserve Bank of New Zealand (RBNZ) would hike the official cash rate (OCR) by 50 basis points to 2.00%. One economist expected a 25 basis point hike.

Meanwhile, "a larger and earlier increase in the OCR reduces the risk of inflation becoming persistent, while also providing more policy flexibility ahead in light of the highly uncertain global economic environment," the RBNZ said in a statement.

The statement is hawkish and this is supporting the kiwi higher as follows:

As per the pre-RBNZ technical analysis, NZD/USD Price Analysis: Bulls seeking a higher correction on weekly chart, the bears were in the process of mitigating some of the price imbalance the 4-hour chart as follows: 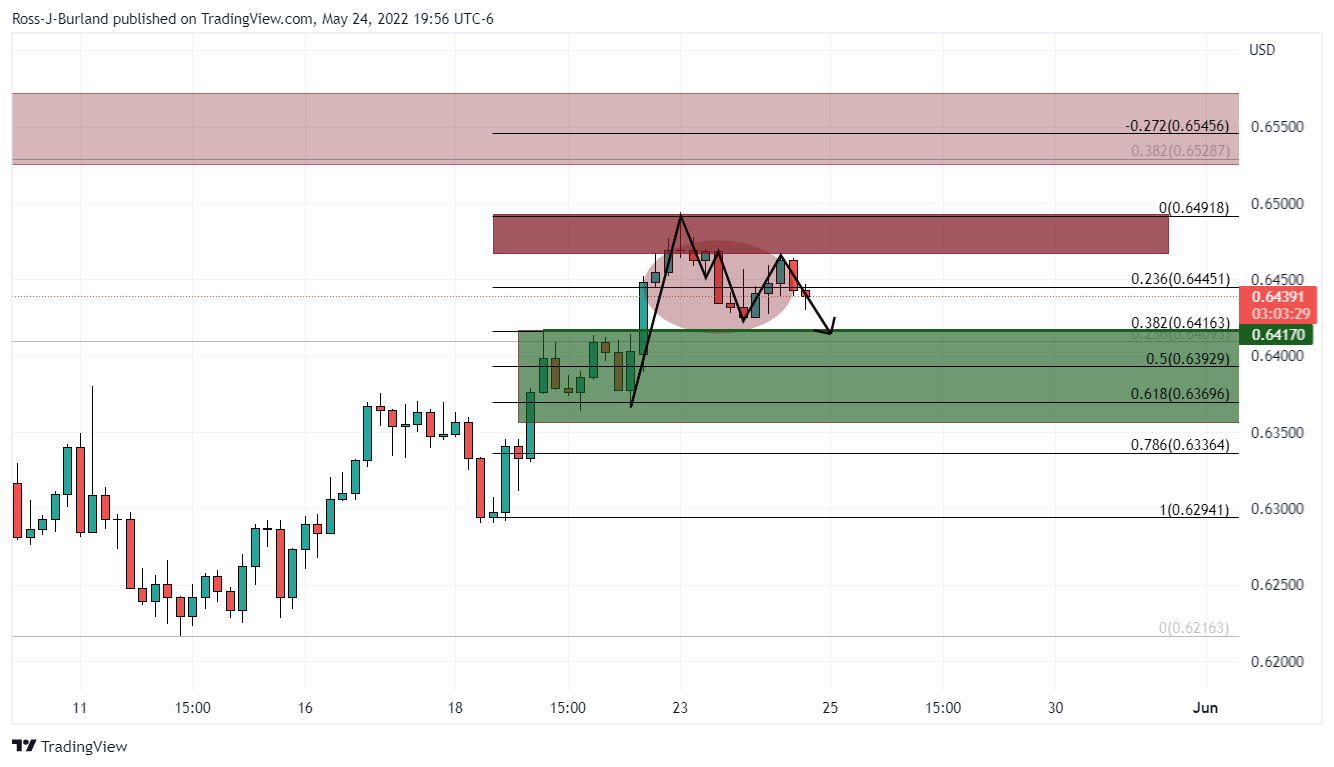 But following the test of the 38.2% Fibo, the decision has sent the kiwi higher to take on the resistance as follows: 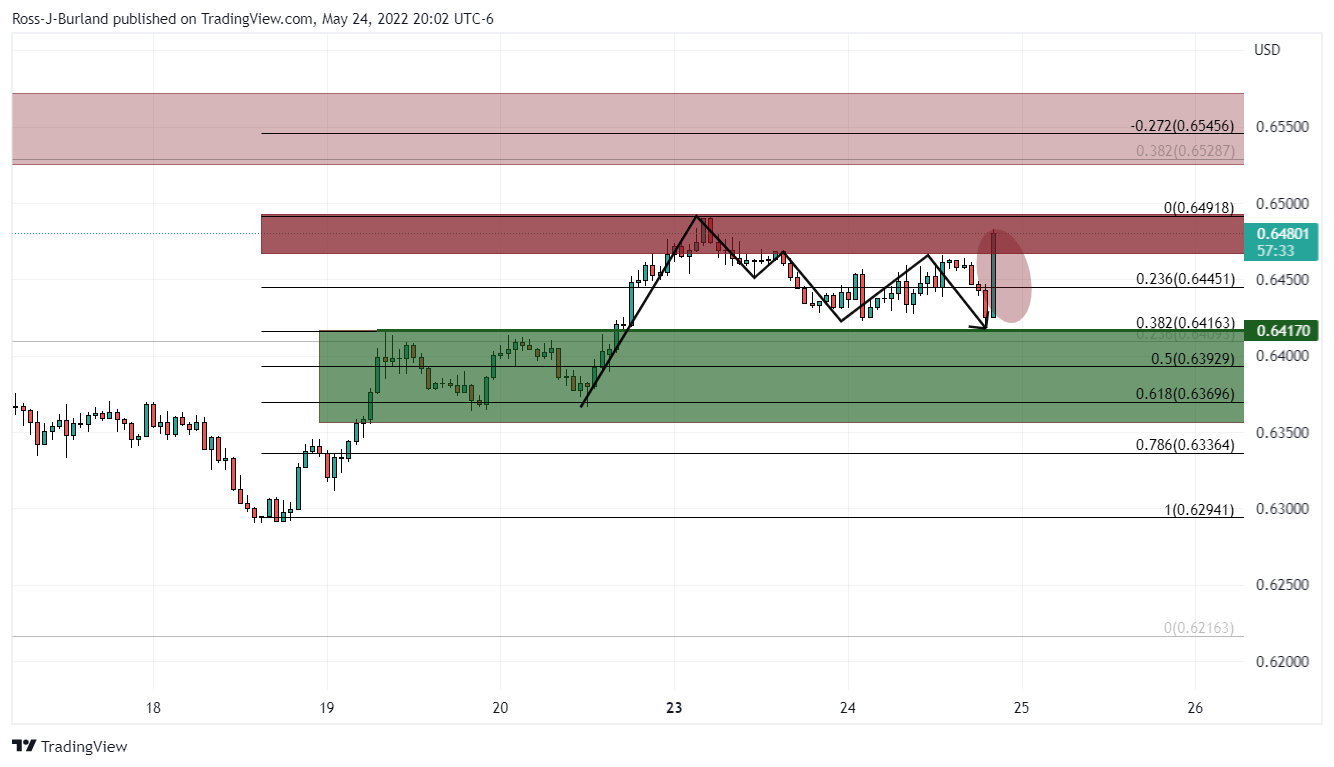 The RBNZ is signalling higher rates ''to ensure annual inflation returns within its target range over the next two years.''

''Interest rate decisions will likely become more difficult over the second half of the year, especially as evidence of cooling demand starts to mount. As such, we anticipate they will return to more normal 25bp hikes as they assess how previous interest rate hikes are transmitting through the economy,'' analysts at ANZ Bank argued.

Meanwhile, the outcome leaves the weekly correction intact and the price is on track for a move into the prior swing lows that have a confluence with the 38.2% Fibonacci retracement level of the prior weekly bearish impulse as follows: 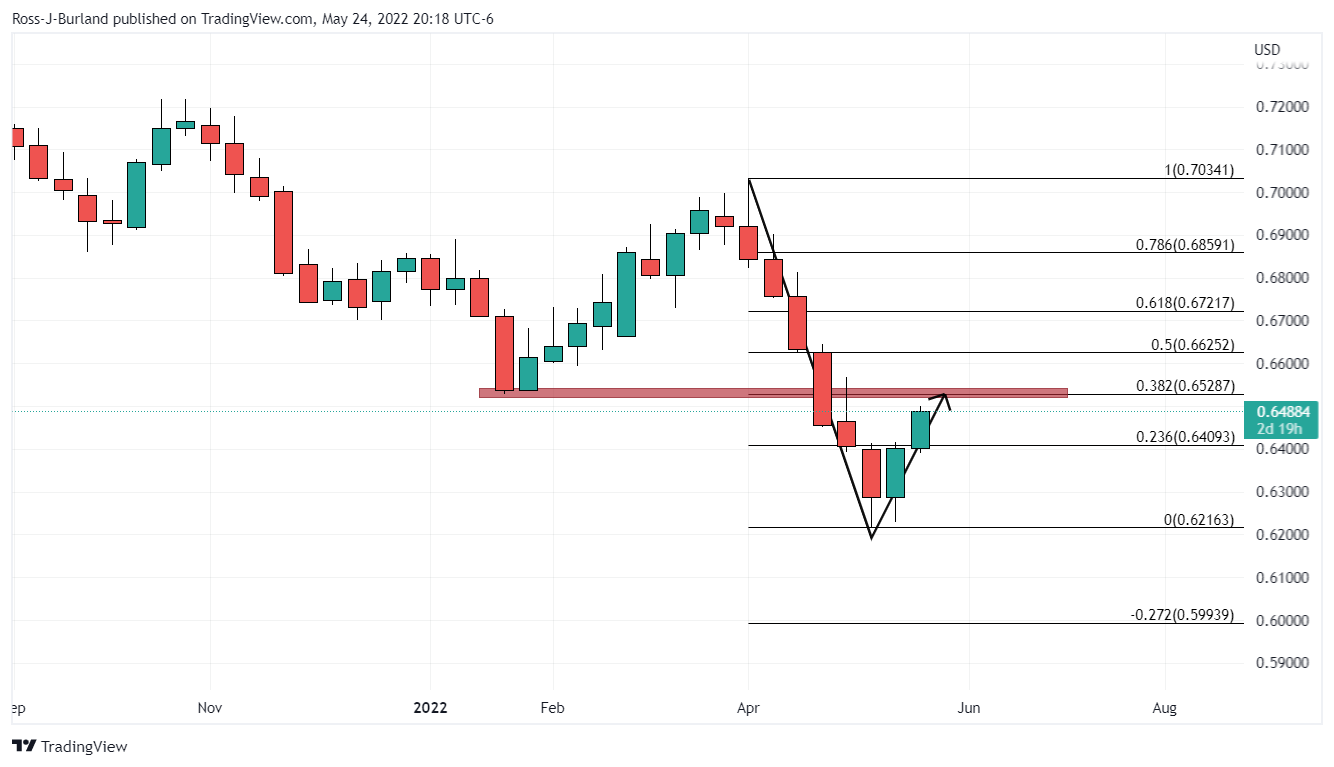 About the RBNZ Interest Rate Decision

RBNZ Interest Rate Decision is announced by the Reserve Bank of New Zealand. If the RBNZ is hawkish about the inflationary outlook of the economy and rises the interest rates it is positive, or bullish, for the NZD.