Update: BNGO shares are trading higher on Tuesday as the company announced that its "Saphyr Study Is First to Analyze Cancer Regulation at Level of Single DNA Molecules, Opens Promising New Avenue of Cancer Research".

Going from strength to strength – BioNano Genomics (NASDAQ: BNGO) has surged by 28.73% on Monday, closing at $12.58. While shares are off the fresh 52-week highs of $13.65 and may continue correcting on Tuesday, the surge is an incredible feat for the firm. San Diego-based Bioano hit a 52-week low of $0.25 late last year, making its leap even more impressive.

The genetics company impressed the medical community and investors with its recent breakthroughs including mapping genes related to the autism spectrum, cancer, and even COVID-19. Its work allows for better care and may also translate into higher sales down the road.

Investors were impressed enough to provide the company with $230 million in its underwritten offering of common stock. The financial exercise includes options to buy more stocks at a discounted price. The prospects of offering new stock had already weighed on BNGO earlier in the year, and closing the round was shrugged off on Monday.

Raising money became easier when professional investors also gave BioNano Genomics some backing. Jason McCarthy, an analyst with Maxim, bumped up his price forecast from $2 to $14. At the current closing price, there is still room for the company to run. McCarthy was impressed by the firm's Next-Generation Cytogenomics Symposium – an event where it showcased its Saphyr optical genome mapping (OGM)  capabilities. 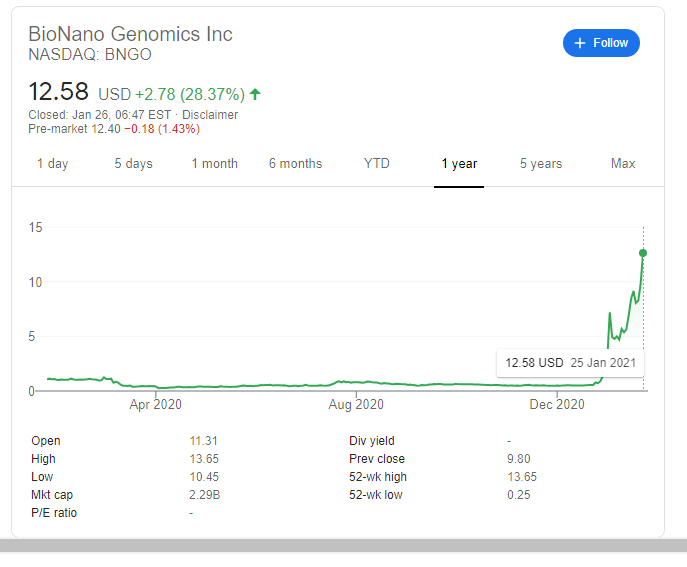 NASDAQ: BNGO has already dropped from the highs and may continue lower. However, such a correction makes sense after the meteoric rise. To the downside, the levels to watch are the round $12 level and then Monday's low of $10.45.