Update: Thursday's premarket trading is showing that NYSE:BB shares are set for a decline of around 2%, following a surge of 3.60% on Wednesday. BlackBerry's shares closed Wednesday's trading at $12.79 after hitting a high of $13.64 – showing that the consolidation process has already begun. It is essential to note that the Canadian firm's shares changed hands at around $7 at the end of 2020, and have surged since then. However, there are several reasons to remain bullish on BB, as explained below. Bargain-seekers may opt to take advantage of this slide to make the classic "buy the dip" trade.

Former President Barack Obama was famous for his BlackBerry – and stocks are rising as his Vice-President Joe Biden is set to enter the White House. Canada's BlackBerry Ltd (NYSE: BB) is no longer focused on hand-held devices but rather on enterprise software and the Internet of Things (IoT). However, the firm is enjoying a blast that sends its to price seen in the past – shares are hitting the highest since 2018.

Update: BlackBerry Ltd (NYSE: BB) has been extending its gains on Wednesday, hitting a high of $13.63. Developments related to the firm's dealings with Amazon, Facebook, and Huawei continue convincing investors to pile in. For more seasoned traders, BlackBerry's handheld devices are a blast from the past, but its recent ventures into the enterprise software and IoT promise a future. At the current price, BB is just shy of the $13.83 closing high in the first days of 2018. If it extends its gains, there it would hit prices last recorded back in early 2002 – when the dot-com bubble was unaveling.

Update: NYSE: BB has soared by 25.51% on Monday, taking it to a new 52-week high of $12.39 before closing the day at $12.35, near that peak. Tuesday's premarket trading is pointing to additional advances – another increase of around 6% to $13.09. Apart from the deals that BlackBerry made (described below) the veteran mobile phone firm turned IoT company could be benefitting from positioning on options. According to a report, futures set to expire in December 2021 signal implied volatility is on the rise. The Waterloo, Ontario-based firm is now trading near the 2018 peak, and surpassing it would lead to levels last seen in the dot-com bubble of the early 2000s.

Three deals with larger tech firms are boosting the stock.

1) Huawei: BlackBerry sold some 30 mobile phone patents to the Chinese telecom giant. The prominent firm sells cellphones and is also a leader in 5G technology. Getting rid of its legacy business allows BlackBerry to focus on the future.

2) Facebook: Huawei is not the only controversial firm BlackBerry is dealing with. Also with Mark Zuckerberg's social behemoth, BB is letting go of its past. The two firms have settled an ongoing dispute related to patent infringements. The burden of having BB's financial might was a weight on BlackBerry's shoulders.

3) Amazon: Moving from one giant to another, the Canadian firm's future may lie with the retail behemoth. The two companies are collaborating around the IVY car platform, combining software abilities. 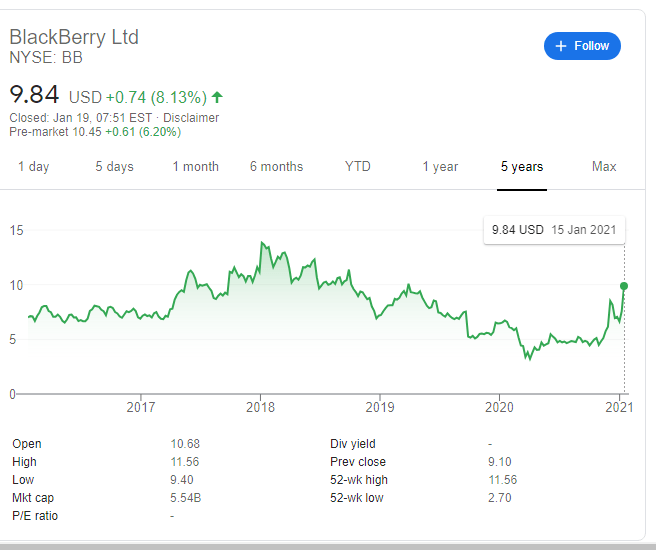 Investors are cheering these developments and pushing stocks higher. After closing at $9.84, Tuesday's premarket trading is pointing to another increase of over 6% to above $10. That would be the highest since late 2018.

The peak seen around that time was around $14, which is a stretch target for bulls. Support awaits at the previous peak of $8, followed by $7.