"BB to the moon" was a familiar cry in the early stages of 2021 as the stock was one of the most popular buys with the retail investment community. GameStop, AMC and BB were probably the three most popular meme stocks in January and February. While the underlying fundamentals of each company made them questionable long-term investments, the retail argument was simpler. Find stocks that are overly shorted and create a self-fulfilling short squeeze. The move was brilliantly executed but saw many stocks stretched way too far on a fundamental valuation basis. BlackBerry has been falling steadily since February and recent results only added to the decline.

Eh, nope. The honest answer is it does not have enough money to pay a dividend. So this part of the investment criteria is out of the way. Is there anything else investible here? After all, BlackBerry was the phone of choice for the savvy finance professional a mere ten to fifteen years ago before failing to move with the times and adapt to the smartphone revolution.

BB released Q4 results after the close on March 30. Results missed expectations and were highly disappointing. Revenue missed the $245 million estimate by $30 million and EPS was $0.03. GAAP results, which are stricter and more comparable, showed the situation was slightly worse.

BlackBerry blamed licensing problems for the miss as it looks to offload some of its licensing activities. The official Q4 release read:

"During the quarter BlackBerry entered into an exclusive negotiation with a North American entity for the potential sale of part of the patent portfolio relating primarily to mobile devices, messaging and wireless networking. The Company has limited its patent monetization activities due to the ongoing negotiations. If the Company had not been in negotiations during the quarter, we believe that licensing revenue would have been higher."

Overall everything about BlackBerry is screaming do not invest right now. The share price is obviously reflecting this sentiment, and even the usually bullish retail crowd appears to have deserted BlackBerry.

Technically, support at $8.37 is key and a break of this brings us to target $6.54. A break above moving average resistance would help change the short-term picture back in favour of the bulls who would then target $10. Overall though, a classic bearish trend is in place – lower highs and lower lows. 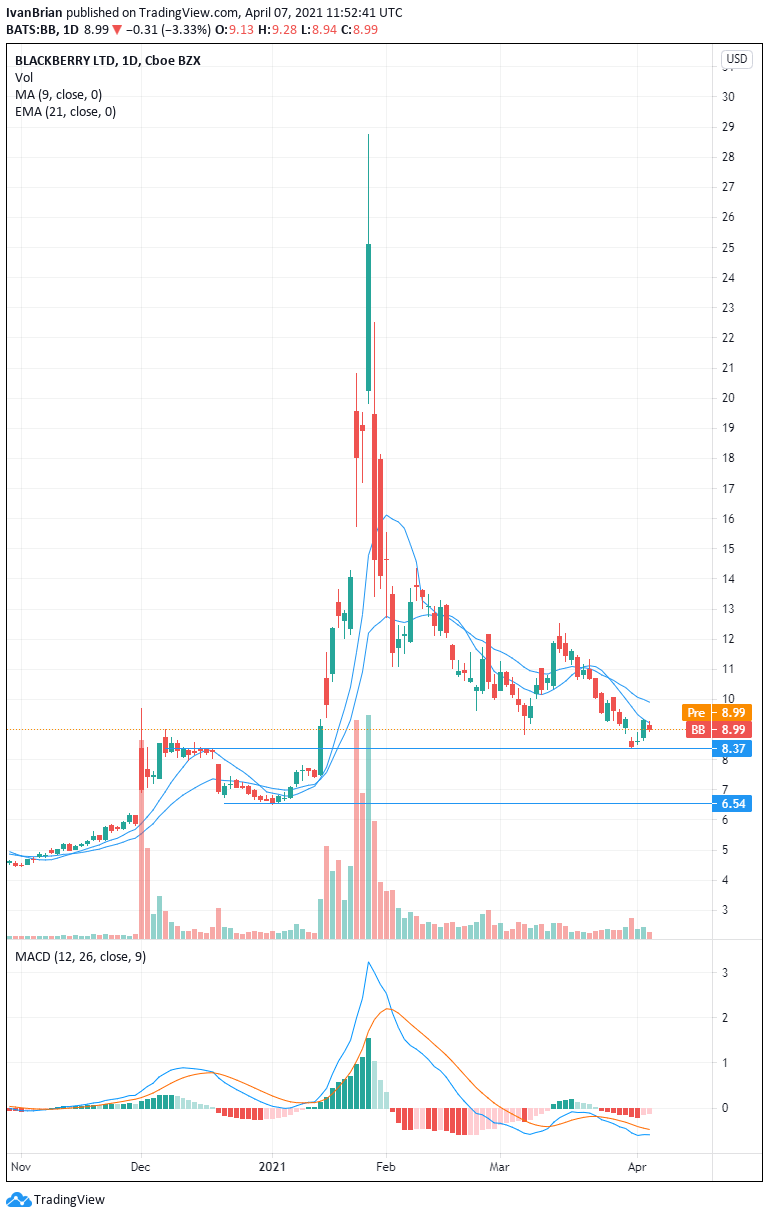