NYSE:BA is soaring once again as the Seattle-based aviation juggernaut gained a further 3.29% on Tuesday to close the trading session at $218.49, a price level that is well above its 50-day and 200-day moving averages. The beleaguered stock has recovered over 35% during the last month and with all of the good news that is surrounding Boeing, shares could just be getting ready for take-off. Still, Boeing has had an all-time bad year and even with the recent surge, the stock is still down over 30% on the year.

The Boeing 737 Max being cleared to fly again in the United States is music to Boeing investor’s ears, as the damage caused by this plane may have had long-term or even permanent effects on Boeing’s reputation. One airline company, Alaska Air Group (NYSE:ALK) has already placed an order for 13 of the 737 Max planes, and with global travel expected to pick back up at some point in the near future, we can reasonably expect more airline companies to follow suit. 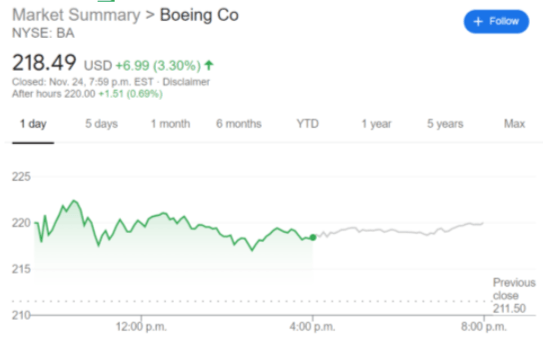 The report of multiple biotech firms nearing completion of their COVID-19 vaccine trials has also provided a nice spike to investor confidence. The aviation and airline industries are not the only sectors to have been resuscitated as of late, as the hotels, vacation booking, and entertainment stocks have also seen a massive surge. With seemingly more planes in the skies at some point in 2021, savvy investors can still buy this dip, with the hopes that Boeing’s stock can return to its high-flying ways.