The data arrived as follows

AUD/USD has dumped 0.17% and counting for the session on the knee-jerk on the back of the combined disappointments in the data. 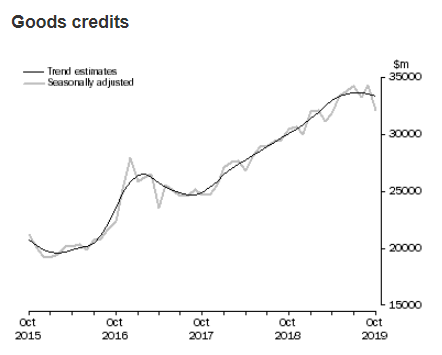 Australian retail turnover was relatively unchanged (0.0 per cent) in October 2019, seasonally adjusted, according to the latest Australian Bureau of Statistics (ABS) Retail Trade figures. This follows a rise of 0.2 per cent in September 2019.

"There were falls for clothing, footwear and personal accessory retailing (-0.8 per cent), department stores (-0.8 per cent) and household goods (-0.2 per cent)," said Ben James, Director of Quarterly Economy Wide Surveys.

Analysts at Westpac, ahead of the data, explained that in yesterday’s national accounts:

"The ABS noted that the “reduction to tax payable did not translate to a rise in discretionary spending, which led to a visible impact to household saving.” Indeed household consumption spending rose just 0.1%qtr, with spending on discretionary goods and services falling -0.3%. The Oct retail sales survey is the first official reading on the consumer for Q4."

As for the trade balance, the analysts at Westpac said that Australia was on track for its 22nd consecutive monthly trade surplus in Oct. "Markets will focus most on retail sales but consistently large trade surpluses should not be forgotten as a source of support for A$."

While the data has weighed on AUS/USD, prior to the data, Valeria Bednarik, the Chief analyst at FXStret argued that "the pair, however, would only turn bearish on a break below the 0.6800 figure." Trade deal optimism, as well as the prior session's positive data events from China, as well as a relatively inline Gross domestic print from Australia, have likely taken some of the blow out of today's poor domestic data.

Gold price is building on Wednesday’s rebound, as bulls remain hopeful amid renewed fears over the Omicron covid variant after the US detected one case of the new strain and remains poised to extend the mask mandate.