The AUD/USD pair dropped to one-and-half-week lows during the first half of the European session, with bears now looking to extend the downward momentum further below the 0.7700 mark.

The pair struggled to capitalize on its modest intraday gains to the 0.7745 area, instead met with some fresh supply and was being pressured by a combination of factors. This marked the third day of a negative move in the previous four and pulled the AUD/USD pair away from the highest level since February 25, around the 0.7890 region touched earlier this week.

Following a brief consolidation, the US dollar regained positive traction and built on the previous day's hotter-than-expected US CPI-inspired gains. The prevalent risk-off environment – as depicted by an extended selloff in the global equity markets – underpinned the greenback's relative safe-haven status and drove flows away from the perceived riskier aussie.

From a technical perspective, the latest leg down dragged the AUD/USD pair below confluence support – comprising of 100-day SMA, 50% Fibonacci level of the 0.7531-0.7890 positive move and an upward sloping trend-line. The latter, along with another ascending trend-line, constituted the formation of a bearish rising wedge pattern on the daily chart.

Meanwhile, technical indicators on the daily chart have just started drifting into the negative territory. Hence, some follow-through selling will mark a near-term bearish breakdown and accelerate the slide to the 61.8% Fibo. level, around the 0.7670 region. The AUD/USD pair might then turn vulnerable to slide further towards testing the 0.7600 mark.

On the flip side, the daily swing highs, around the 0.7745 region, nearing the 38.2% Fibo. level now seems to act as an immediate strong hurdle. A sustained move beyond should allow bulls to aim back to reclaim the 0.7800 mark. The mentioned handle coincides with the 23.6% Fibo. level, which if cleared should pave the way for additional gains for the AUD/USD pair. 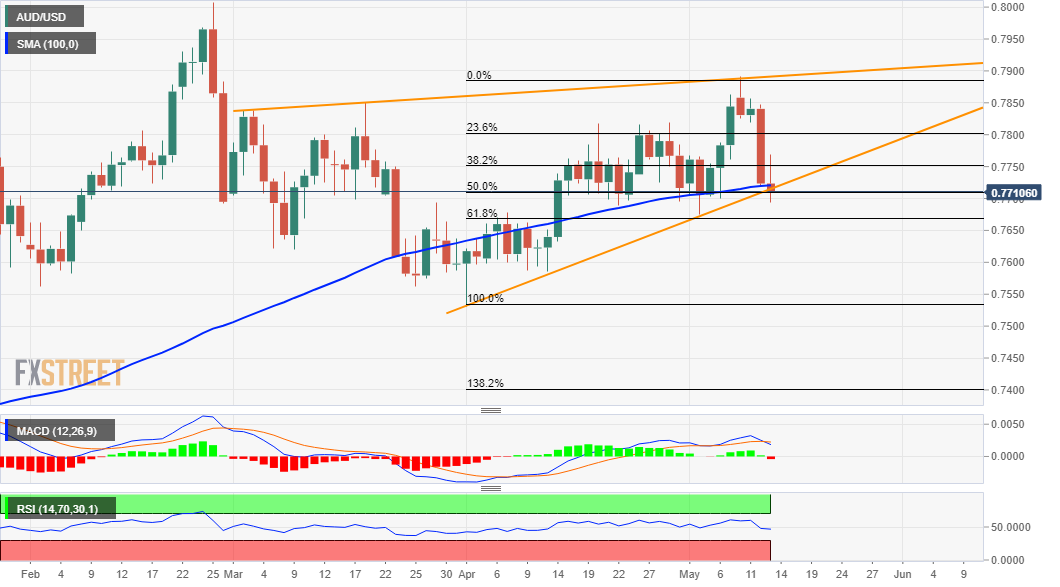