Apple (AAPL) stock gave up more ground on Tuesday as the bearish trend persists in this one with no sign of bulls returning just yet. The broader market has been weak and Apple as the bellwether has not been immune to recent weakness. It was hoped that the launch of new products from Apple and especially the new iPhone 13 would boost the stock, but this has not transpired. While talk of pre-order numbers for the new iPhone was strong, it now appears that the old news and recurring theme for many stocks in 2021 is coming back to hit Apple yet again.

Bloomberg reports that Apple could slash projected iPhone 13 production targets by up to 10 million units for 2021, citing people familiar with the matter. The Bloomberg report says Apple was poised to deliver up to 90 million new iPhone models in the last quarter of this year, but that will now be lower because Broadcom and Texas Instruments are struggling to deliver enough components. The same report also adds another headwind for Apple – Apple supplier TPK Holdings is having to modify production schedules of some subsidiaries in the Chinese Fujian province due to local government power restrictions. Global supply chain and semiconductor chip issues are affecting many companies. Apple is not alone in its problems here. Many automakers have had to also curtail production due to shortages.

The main Wall Street investment banks remain bullish however. A Reuters report details some investment bank views with Morgan Stanley saying Apple will likely receive more supply than competitors, while JPMorgan says demand and interest for the iPhone 13 is tracking better than investor expectations. Goldman Sachs though says predictions are more difficult this year. Wedbush gives more detail, saying Apple will run into a shortage of over 5 million iPhone 13s for the festive season if demand keeps up, and Wedbush expects those units to ship in Q1/December quarter.

Apple has also announced an event for October 18, no further details are available on the possible content.

The pullback to $144.50 was now clearly our pullback short entry with this bearish fundamental news adding to the series of lower highs, making our chart bearish. The Relative Strength Index (RSI) is weak, under 50 and trending lower. The Moving Average Convergence Divergence nearly gave us a crossover buy signal on Tuesday, but this just failed.

FXStreet Ideas: Buy the dip at the strong support zone at $133.80. Down here is the Volume Weighted Average Price (VWAP) for the year and the 200-day moving average. 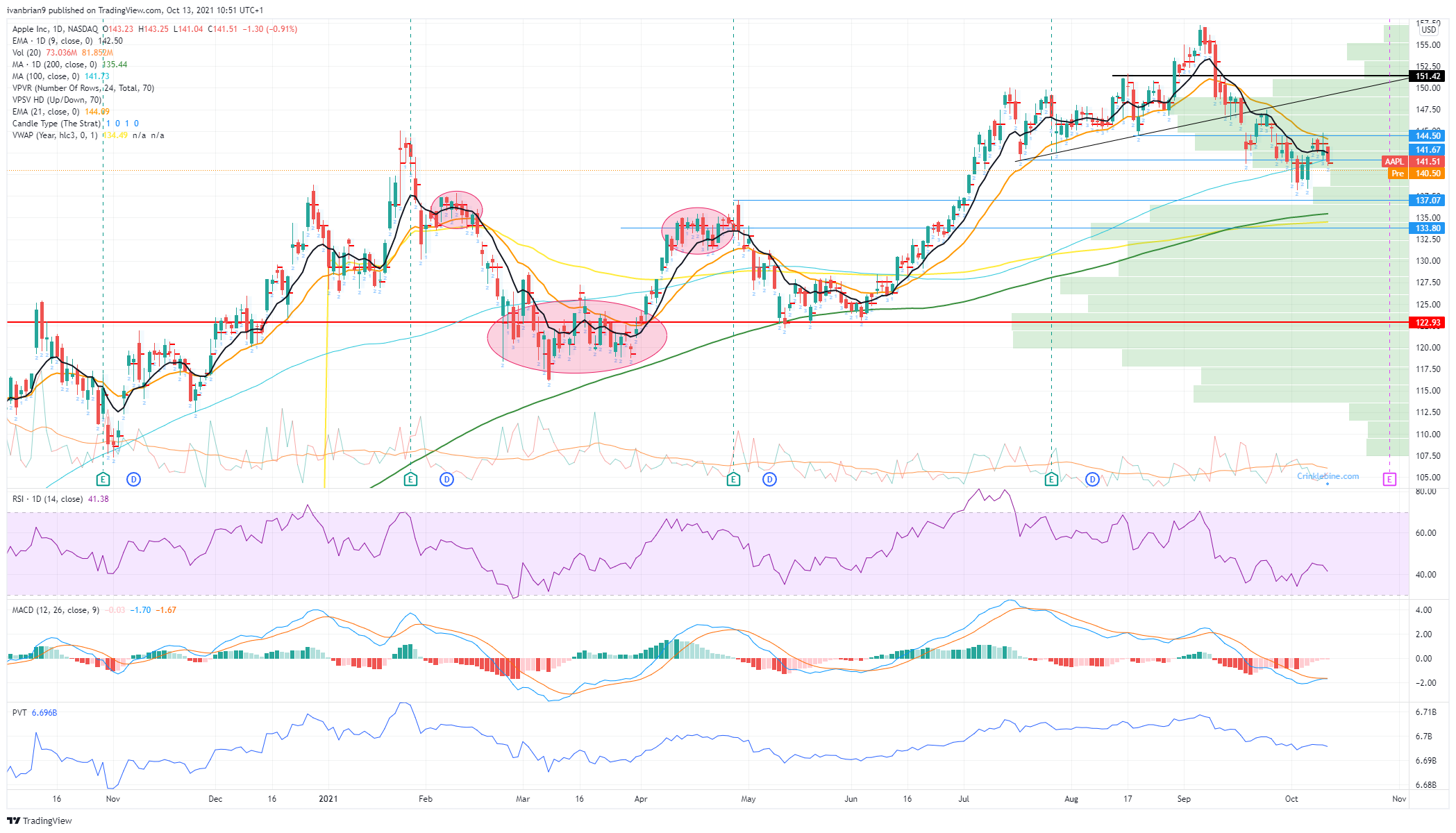