NASDAQ:APHA has had a stellar 2021 so far like much of the cannabis industry has, but that came to a screeching halt on Thursday as the broader markets hit a minor speed bump. Aphria’s stock fell by 6.70% and closed the bumpy trading session at $19.23, which is still well above its 50-day and 200-day moving averages. The Ontario, Canada-based company has rewarded its investors so far this year returning over 160% even though the stock has fallen since peaking at a 52-week high of $32.29 earlier this month.

Much of the talk around Aphria this year has revolved around its impending merger with Tilray (NASDAQ:TLRY), one of the leaders of the Canadian cannabis industry. Tilray surprised Wall Street and investors this past week with a better than expected earnings report which included strong fourth-quarter revenues and steadily growing margins. Despite this, several analysts still downgraded Tilray for the long-run, citing that the Nanaimo-based firm may not be strong enough to stand on its own for much longer. The merger with Aphria seems to be happening at just the right time for Tilray, which also saw its stock fall by 14% on Thursday. 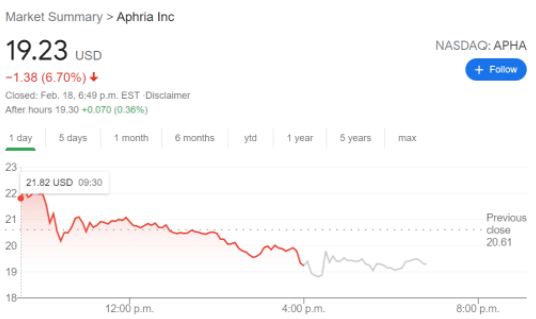 Aphria CEO Irwin Simon will be running the new merger which will still operate under the Aphria brand. Both companies will look to leverage each other as they plan to expand operations into Europe’s medicinal marijuana market once the deal is settled. At this point, with European countries already legalizing cannabis for medical use, the continent may be a more profitable point of entry as the United States still awaits federal legalization. Besides, there are already plenty of American cannabis companies in operation for when that legislation inevitably occurs.

Gold prices meet critical support on the daily chart and key resistance on the hourly. Overnight, the commodity complex was pressured and gold prices fell by the same margin as measured by XAU/USD which travelled from a high of $,797.79 to a low of $1,777.28.

Ethereum price is decoupling from the Bitcoin universe and printing new highs today on the largest daily volume since February 24. The resistance at the 161.8% Fibonacci extension of the February decline at $2,504 is proving a challenge for the second time in two weeks.