Update: AMC stock staged an impressive comeback from three-day lows of $20.74 and closed Wednesday 5.41Z% higher at $23.66, regaining the upside traction after falling hard earlier in the week. The meme stocks rebound firmly amid the return of risk flows after the US Consumer Price Index (CPI) data softened in July and vapored out aggressive Fed rate hike expectations. Meanwhile, the company news also underpinned the sentiment around its stock price. AMC Entertainment has declared a special preferred stock dividend to reward investors but the plan is essentially going to function like a stock split. The market’s pricing of the Fed rate hike and recession fears will continue to impact the Wall Street stocks amid a covid resurgence in China and escalating US-Sino trade row, rekindled by US House Speaker Nancy Pelosi’s visit to Taiwan.

AMC Entertainment (AMC) stock has bounced 13.6% to start the week on Monday following Friday's schizophrenic price action. Shares are currently trading at $25.20 an hour into Monday's New York session. Meme stock fans seem to be loving the introduction of a preferred share stock unit that will be given to holders of record on August 15. Expect steady share price appreciation into next Monday, when the ex-dividend date approaches. Shares have traded as high as $27.50 already in the session. $20 calls expiring this Friday, August 12, have appreciated 88% on Monday and are now trading at $5.65. A total of 2,615 contracts have traded on Monday.

"Today we pounce" was the rallying call from AMC CEO Adam Aron to his AMC ape followers with the announcement of AMC preferred share units, which will trade under the ticker APE. The preferred share units have a nominal value of $0.01 and will be issued as a form of bonus to all existing ordinary shareholders. Not exactly the pounce AMC apes had been waiting for and the confusion reigned supreme on the announcement. AMC stock swung wildly on Friday from being down 11% to close up 19%. You might say this was a typical day then in the life of an AMC shareholder! And in other news, AMC reported results that were totally overshadowed by the preferred APE stock news.

Earnings were actually slightly better than expected with the expected loss of $-0.23 per share being bettered by the actual EPS at $-0.20. Revenue did miss, however, but only by a small margin: $1.16 billion versus consensus at $1.18 billion. Attendance numbers were strong, reflecting the growing opening up of society and the popular slate of releases throughout the quarter.

Now onto the task at hand. The results were totally overshadowed by the announcement of AMC preferred equity units (APE). This got the AMC army all excited with the expected so-called bonus preferred share. On closer examination though, the Apes could have got it all wrong. They are possibly going to be massively, massively diluted in all likelihood, and there is nothing they can do about it. Their voting power could get taken away, and they will not be able to vote down any dilutive share issuance.

From AMC's own filing with the SEC:

10. We repeatedly have said that AMC’s shareholders approved back in 2013 the creation of Preferred Equity. Each APE will have similar rights to a common share, but cannot be converted into common stock unless shareholders now or in the future vote to approve that. #TodayWePounce

Guess those preferred shares carrying 100 votes could just have stacked the deck, so let us be clear. There could be a massive dilution in voting power and convertible dilution if AMC goes ahead with the preferred designations and if they are converted. The last time AMC wanted to issue more stock, AMC Apes voted it down because they knew it was dilutive. Now they may not have voting power to stop it.

The confusion will likely last for some time and may not even be picked up. This is a clever move in my opinion, but not one that will help ordinary shareholders. AMC has piles of debt and deferred leases that come up for repayment in the next few years. It needs money to pay this down. It needs to raise capital, but AMC apes voted that proposal down. Now they will not have the power, so AMC should be able to issue more dilutive shares and raise some more cash. 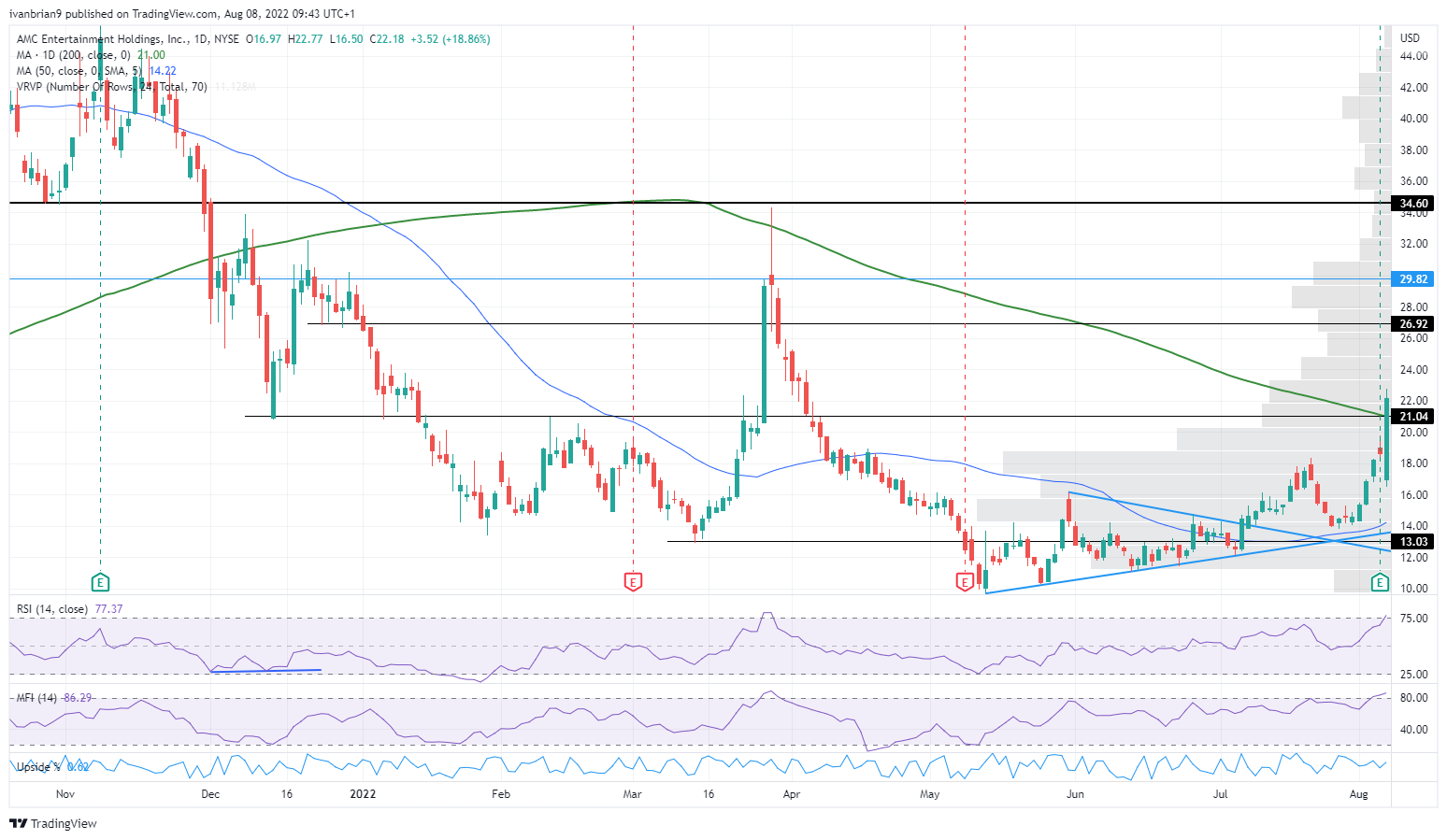 Update: AMC stock reverted its early slide and closed Wednesday with gains at $23.67 per share, adding 5.20%. US stocks soared amid easing US inflation, suffering a short-lived setback mid-US afternoon, but resuming their advances ahead of the close. The Dow Jones Industrial Average added 535 points, while the Nasdaq Composite advanced 2.89%. Finally, the S&P 500 gained over 2%. Speculative interest ignored warnings of a potential recession coming from Minneapolis Fed President Neel Kashkari, who also said that the idea of cutting interest rates early next year is unrealistic. Also,  Chicago Fed President Charles Evans said that he does not expect the Fed is finished with rate increases and that he expects the funds rate to top out at 4%. He also expects rates to rise this year and next.

Update: AMC stock sold off 6.2% to $21.06 in the first hour of Wednesday's session. It seems the delayed range high from Monday following AMC's second quarter earnings last Thursday has been given up on. Call options for the $25 strike price expiring this Friday have dropped 41% in value today to trade at $0.55 a share ($55 per contract). More than 20,000 contracts have changed hands in the first hour. All three major indices are up on Wednesday after US inflation came in much lower than expected. Prices for July were level with June, and the general opinion seems to be that inflation is on a downward trajectory. The Nasdaq is up 2% at the time of writing.

Update: AMC Entertainment stock kept rallying on Monday, adding 8.03% to settle at $23.96 per share. US indexes ended the day mixed, with the Dow Jones Industrial Average adding 28 points, but the S&P 500 and the Nasdaq Composite ended the day in the red, down 0.08% and 0.10%, respectively. Market players temporarily shrugged off concerns about an aggressive US Federal Reserve, spurred by a solid local employment report last Friday, ahead of the release of July inflation figures, to be out next Wednesday. Speculative interest hopes inflation eased from record highs and gives a breathe to stocks.

Update: AMC Entertainment stock extended its previous winning streak and exploded to the highest level since April this year at $27.40 before seeing a quick retracement to settle Monday at $23.90. In doing, AMC share price added 7.75% on the day. According to Business Insider, shares of AMC Entertainment, GameStop and Bed Bath & Beyond were among the most traded stocks at Fidelity on Monday, suggesting retail investors are fueling the surge. However, the late pullback in major Wall Street indices dragged AMC stock price lower. Investors continued to assess aggressive Fed tightening bets, triggered by an outstanding US employment report released last Friday, in the face of looming recession risks.

Update: AMC Entertainment stock is down 5.2% at $22.72 in the first half hour of Tuesday's session. The present pullback comes after AMC shares advanced for an unusual six straight sessions. Of course, some of those sessions saw price slumps earlier on only to experience an updraft late in the session, so this could still become the seventh straight up day. AMC shares opened at $23.20, well off Monday's close at $23.96. From there they rallied to $23.85 in sight of the previous close but then sold off to below $23. Fellow meme stocks GameStop (GME) is off 6% at the time of writing, and Bed Bath & Beyond (BBBY) is down 9% following its recent violent surge. The Nasdaq is off 1.4%, which tells us that risk-off is the mood of the moment. Nvidia's (NVDA) major preliminary earnings miss, released on Monday, continues to make waves as traders wonder if this is the end of the Summer's bear market rally, which began nearly two months ago.