AMC Entertainment (AMC) stock fell sharply on Wednesday as meme stocks finally looked to be rolling over after some huge gains over the past two weeks. Poster child Bed Bath & Beyond (BBBY) did close 12% higher, but this was a much lower close than the premarket levels. This is one of our classic "tells".

AMC stock will not have been helped by news of competitor cinema operator Cineworld (CINE) in so called rescue talks. CINE stock fell 60% on Wednesday although it has been recovering somewhat in Thursday's premarket.

Cineworld's released the following statement to the London Stock Exchange on Wednesday: "Despite a gradual recovery of demand since re-opening in April 2021, recent admission levels have been below expectations. These lower levels of admissions are due to a limited film slate that is anticipated to continue until November 2022 and are expected to negatively impact trading and the Group's liquidity position in the near term... the Group remains in active discussions with various stakeholders and is evaluating various strategic options to both obtain additional liquidity and potentially restructure its balance sheet through a comprehensive deleveraging transaction. Any deleveraging transaction will likely result in very significant dilution of existing equity interests in Cineworld."

One does wonder how they managed it so badly when AMC has been shouting from the rooftops about surging demand. Cineworld is the second largest cinema operator in the US behind AMC. AMC did manage to perform some badly needed capital raises to keep afloat during peak meme stock madness, so it is in a better position. This does highlight our continued concerns over AMC however. Namely, it still has piles of debt and deferred leases. Recent so-called bonus preferred units have helped buoy investor sentiment among AMC Apes, but we still feel the worst is yet to come for AMC stock. We feel something dilutive has to happen.

The recent move has already been slowing, and this adds to the bearishness. AMC will target key support at $21.04, and it is likely to break that shortly. A break would then target support at the $13 to $14 zone. $27 is the level that would turn us into AMC bulls based on short-term momentum.

Recent meme stock momentum appears to be slowing, and we expect more of the same. Volatility has elevated, meaning selling out-of-the-money calls can be profitable, but this is a high-risk strategy. Buying lucky $13 puts for September 2 should cost around $0.23 per share ($23 per 100-share options contract). 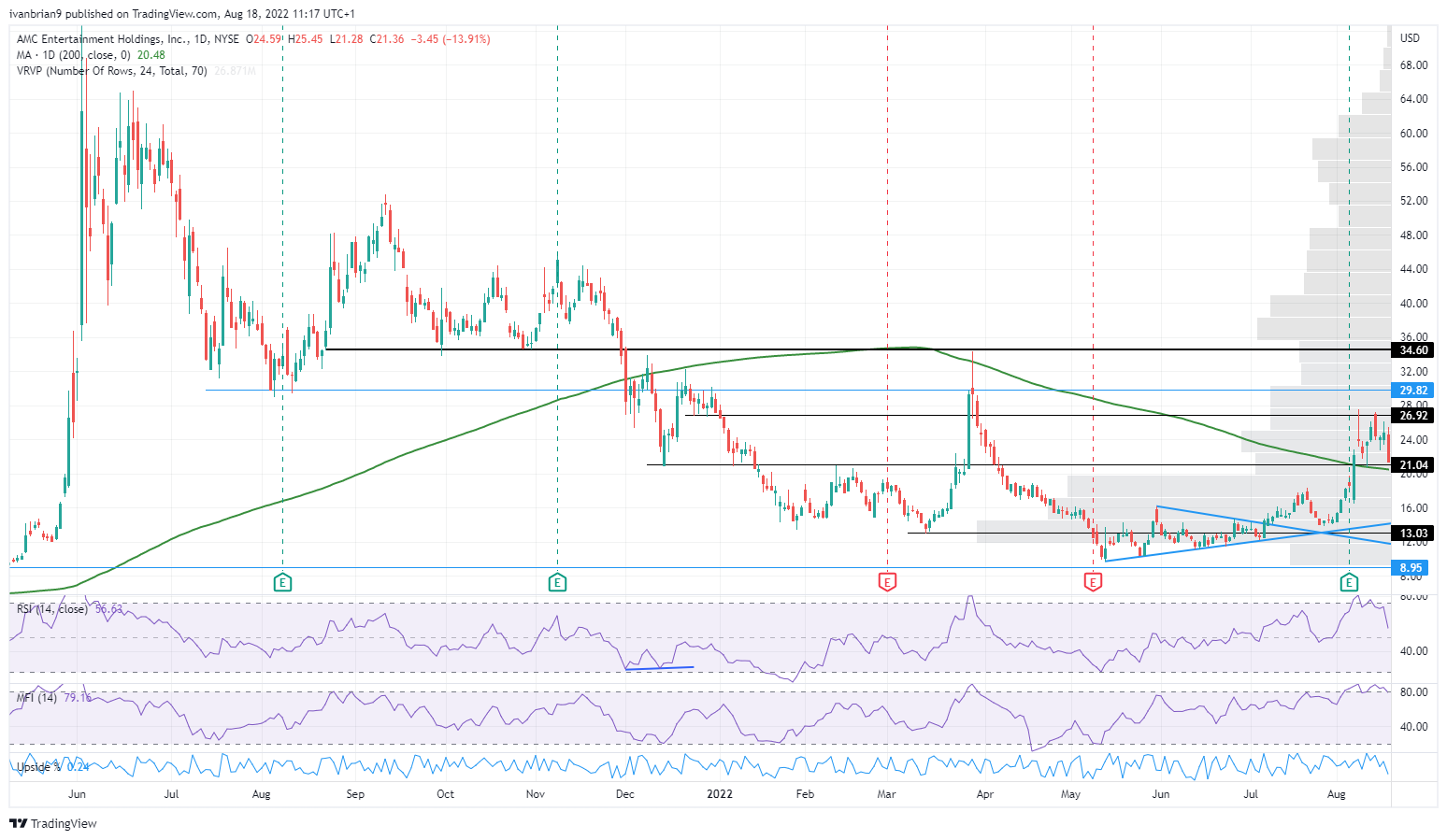 Led by Ethereum, institutions fail to register decent inflows for the seventh week in a row

The overall state of the market has constantly been fluctuating, making it difficult to ascertain whether, going forward, investors should experience another bullish bout or sink into a bearish run. Trading above $1,300, ETH is still testing the lower lows on the charts.