Apple shares continue to remain steady and sideways as the Nasdaq still looks geared up for a push to new record highs. Wednesday saw little action, not surprising with the US CPI report on everyone's mind. Once that is clear at least some directional bias will be evident. The S&P 500 is poised just below record highs but the Nasdaq has a little more work to do. The yield environment has calmed over the last few weeks as the 10-year yield has steadily moved lower. This may change with the release of the CPI data but any moves are unlikely to be too exciting before then.

Facebook is the one FAANG name which has held up since results season, hitting new highs on Tuesday while theo ther big beasts remain in pullback or consolidation mode. Apple shares have fallen back despite AAPL producing stunning earnings in late April and announcing an increase to its dividend and buy-back programs. Apple shares have used the long-term 200-day moving average as support recently and have not been trading below its 200-day moving average since the pandemic crash in March 2020. So a break would be concernings and lead Apple to target sub $120.

The 200-day moving average at $124.42 remains as key support and the fact that the price is the exact same as Wednesday for the 200-day shows just how flat the stock was on Wednesday. This area around the 200-day as we have mentioned is a strong support zone as identified on the chart. It was a pretty decent consolidation zone back in March and April. Holding above the 9 and 21-day moving averages should encourage short-term traders and entice further buyers in.

AAPL breaking the $131.45 resistance level remains key for bulls to end the series of lower highs and lows and set up a test of new highs. The momentum oscillators, Relative Strength Index (RSI) and Commodity Channel Index (CCI), are all in neutral territory with the RSI flatlining.

Apple has exhibited some classic buy the rumour sell the fact in the sharp run in the share price ahead of results. Apple moved from $122 to $137 just before the release of the results and has since dipped back to nearly where it began. Volume has also been lagging as traders appear to be waiting for some catalyst. The CPI may be just that.

The Moving Average Convergence Divergence (MACD) indicator did cross into bullish territory on Monday. All that is needed is for the share price to confirm this, which places our first target for bulls at the upwards channel at $129. Any dips toward $120 can be used as buying opportunities if the trend remains intact and as always, use careful risk management. 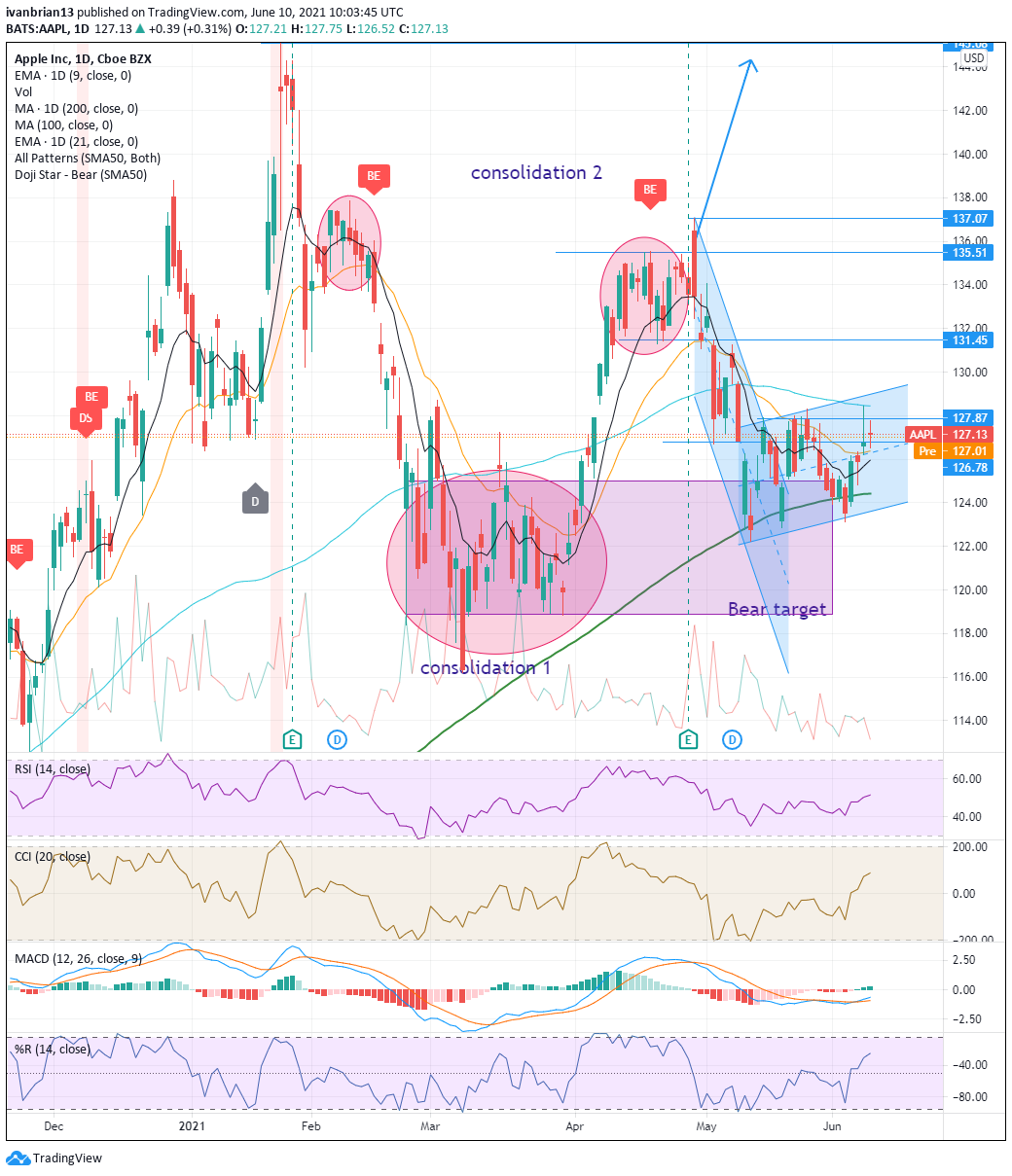