Consumer cyclical stocks were caught in a maelstrom last week as first Walmart (WMT) and then Target (TGT) set investor fears to red alert with their margin pressures and comments over outlook. Both companies suffered massive share price falls with Target suffering a 1987-style plummet and Walmart not being far behind. Consumers are already adjusting to inflation and switching to lower-cost items.

This has knock-on effects on profit margins, and both companies were downbeat on their outlook. This dragged other consumer stocks down, but at least Friday saw a modest recovery as investors squared up positions ahead of another big week of retail earnings. Thursday is the highlight with earnings from Costco (COST) and Dollar General (DG), while Dollar Tree (DLTR) also reports this week.

Aterian (ATER Stock) is a consumer-focused company that sells a range of consumer products through its own websites as well as Amazon (AMZN). The company was formerly known as Mohawk Group but changed to Aterian in 2021. The company uses technology to monitor and constantly evolve with changing customer tastes in order to quickly pivot to meet these tastes. Revenue has grown strongly over the past three years, but that has yet to be reflected in its bottom line. Last week, ATER again reported a loss, and in this case the magnitude was significant. Earnings per share (EPS) came in at $-0.78 versus the estimate of $-0.26. Revenue also missed estimates, and margins declined by 150 basis points. Margin pressure is what Walmart and Target alluded to.

Arturo Rodriguez, Aterian CFO, was also downbeat, saying on the conference call that "while we continue to look for ways to mitigate higher cost dynamics in our supply chain and last-mile cost, we believe we’ll continue to see [contribution margin] pressures for 2022 due to inflationary cost increases.” 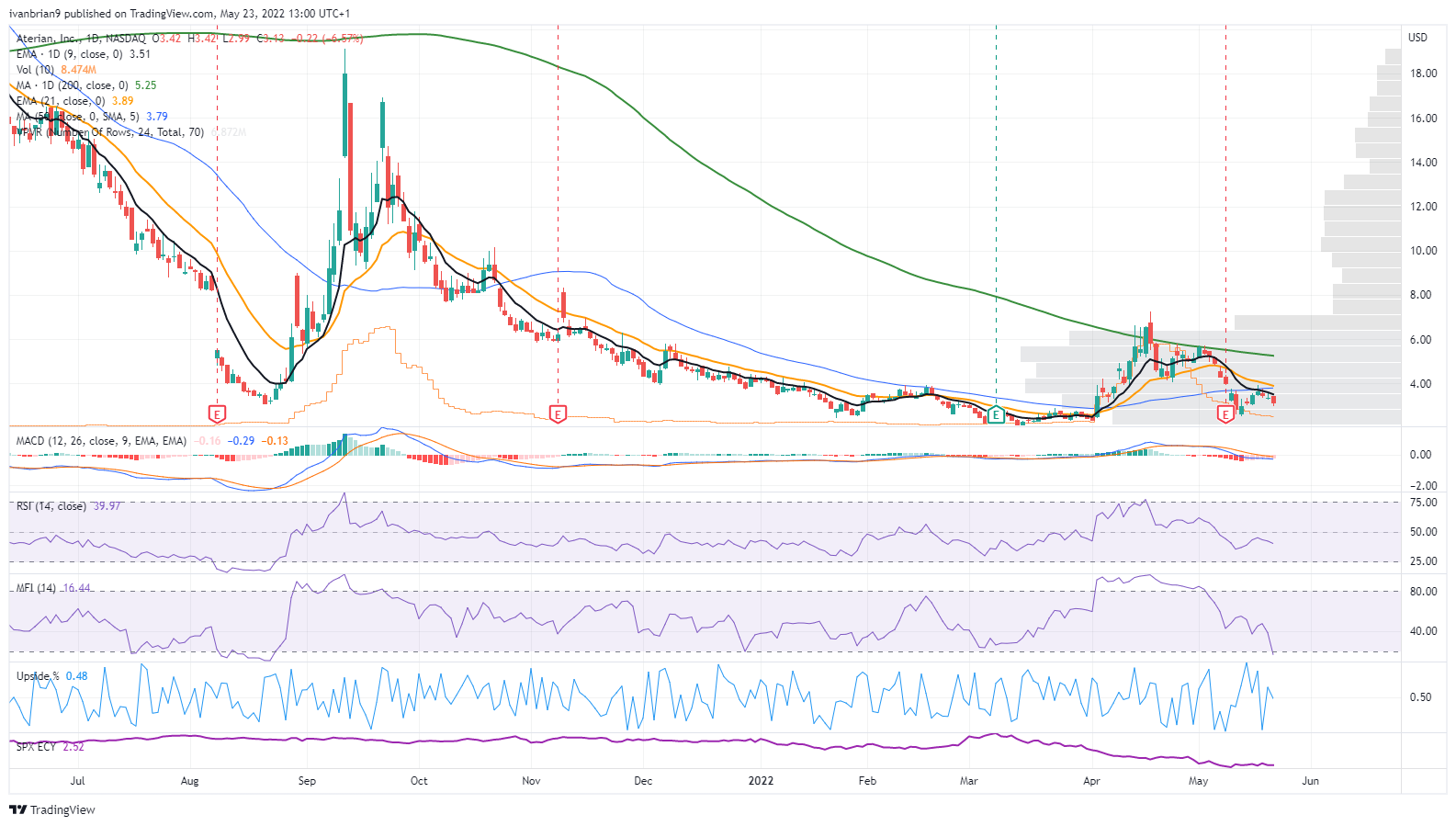 Vinco Ventures (BBIG stock) was a consumer-focused company but has recently pivoted its business model toward the more trending areas of the market such as NFTs and crypto. Perhaps it is just bad timing, but Vinco Ventures also has a social media platform called Lomotif that has been showing strong growth. Vinco Ventures was formerly known as Edison Nation but changed to Vinco Ventures in 2020.

The company is due to rename itself ZASH and spin-off its blockchain and crypto-related entity Cryptyde, which will trade on the Nasdaq under the ticker TYDE. The spin-off will result in shareholders of BBIG receiving one bonus share of TYDE for every 10 shares of BBIG stock held as of May 18. The share dividend is expected sometime around May 27, according to the company. Despite the recent share price appreciation and the related spin-off, we remain bearish on the prospects for BBIG stock. 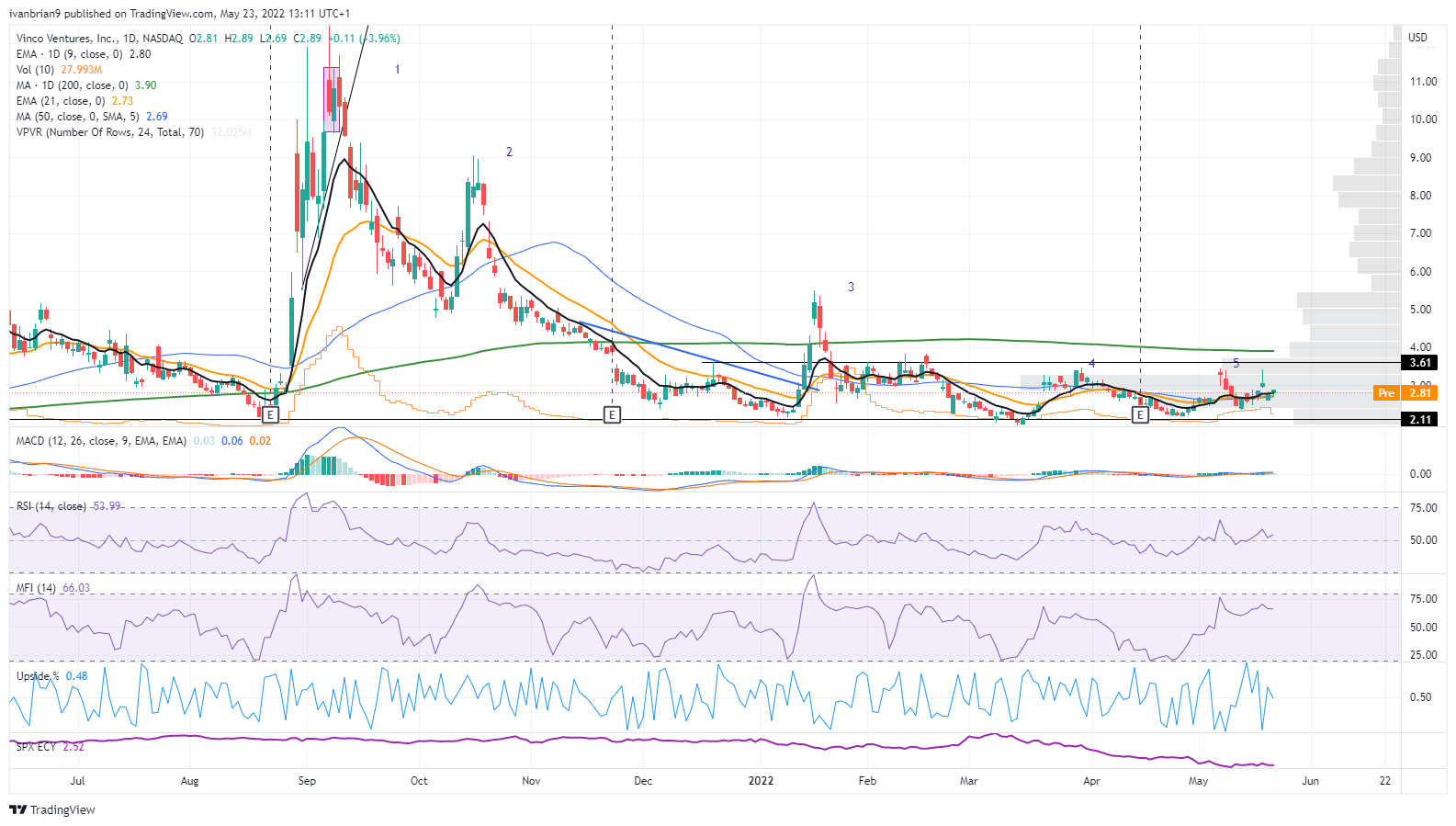 Hyliion Holdings (HYLN stock) is involved in the electric vehicle sector as it develops and designs electric drivetrains for commercial vehicles. HYLN provides battery management solutions and is based in Texas. Hyliion's drivetrain is supposed to turn diesel-powered trucks into electric versions. The company was formed in 2015. Hyliion released earnings on May 9 that beat on EPS, but missed on revenue.

HYLN stock price has been under significant pressure this year and is currently down nearly 50% so far in 2022. As a high growth company, it is suffering in the wake of higher yields and lack of revenue or profitability. Hyliion barely has any revenue, which reached $340K last quarter. Despite this, retail investors saw fit to assign it a $1 billion market cap as recently as January. The penny may eventually drop! This one will struggle to remain solvent.

At least current valuations look a little more in line. Hyliion has over $300 million in cash and little debt. It is burning through less than $30 million per quarter, which is one thing in its favor. 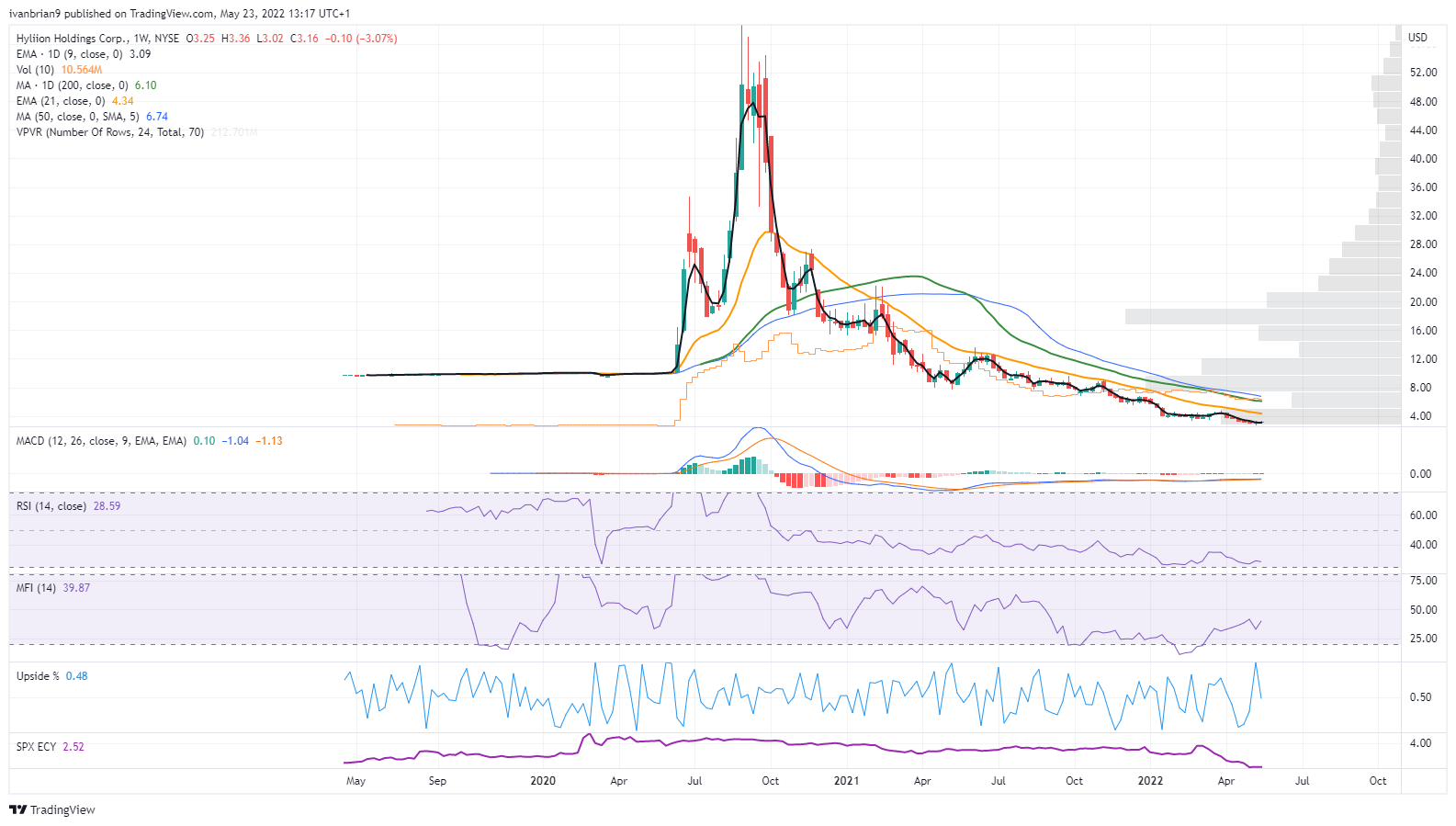 Coupang (CPNG stock) owns and operates an e-commerce business in South Korea. It has been called the Amazon of South Korea, so that gives investors an idea of its model. The company was formed in 2010 in Seoul, South Korea. CPNG has revenue of over $5 billion for the quarter ending in March 2022. Unlike Walmart and Target, Coupang last week announced a strong set of earnings showing margin improvement and a record gross profit.

CPNG stock gained 18% after the earnings release. However, that still leaves it down 55% for the year as investors have fled technology stocks and now also consumer names. These earnings though could be the catalyst for outperformance, and CPNG was upgraded or boosted by numerous Wall Street analysts last week. 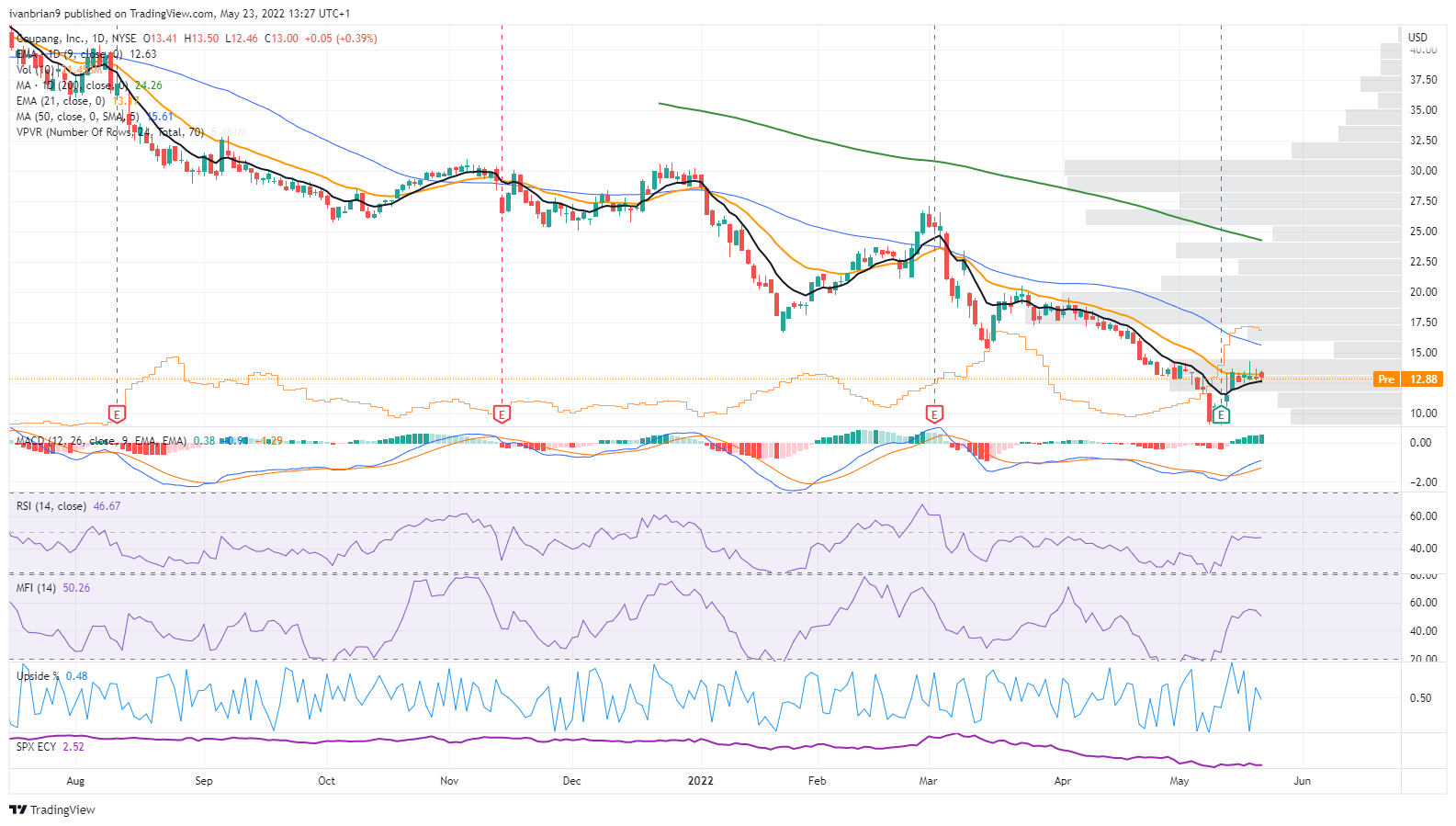 Dutch Brothers (BROS) is a consumer cyclical stock focusing on the drive-thru beverage and coffee market. It serves Dutch Bros branded coffees and teas as well as Blue Rebel energy drinks across its 572 drive-thru locations in the US. Dutch Bros was founded in 1992 in Oregon. BROS stock collapsed after its earnings last week. Revenue was ahead of forecasts, but EPS missed. More concerning to investors was the downbeat forecast for flat revenue growth. The company has been expanding rapidly by opening new stores, but this guidance was enough for investors to push the stock back to IPO levels. 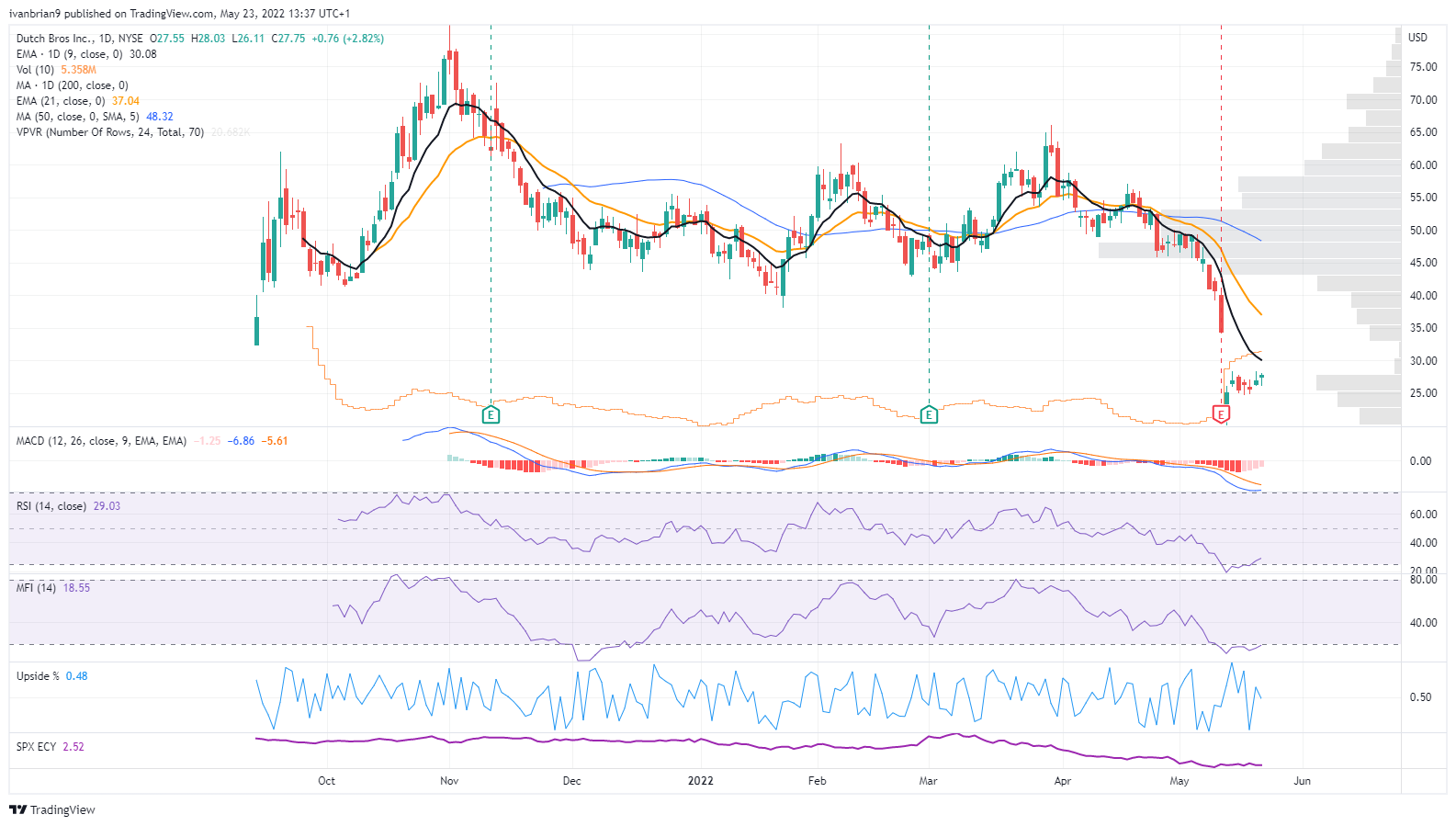