Bitcoin (BTC) is back at $57,000 as a new week begins after a late surge produced a much better weekly close than many expected.

Making up for last week’s Coronavirus-induced sell-off and associated price dip, Bitcoin passed $58,000 overnight before consolidating higher, still up around 5.7% on the day.

The outlook could hold many a surprise — Coronavirus nerves remain, as macro markets hint before the open, and sellers still have the option of taking advantage of leveraged optimists on the back of the latest gains.

With everything to play and the monthly close due in under 48 hours, Cointelegraph takes a look at the numbers to see what could shape Bitcoin price performance this week.

Bitcoin bounces back in record time

Just three days after losing $6,000 in a single daily candle, BTC price action is already back from the brink.

In a classic end to the weekend, BTC/USD rose to produce a weekly close of $57,300 on Bitstamp — thus avoiding its lowest such weekly end price in two months.

The gains have since stuck, with $57,000 still the focus at the time of writing Monday.

“Strong BTC reaction from the 21-week EMA area,” he summarized. Despite local highs of $58,300, however, Bitcoin has yet to deliver a definitive breakout, as major resistance at $60,000 remains untouched.

All previous attempts to crack that selling zone since losing it as support have ended in a firm rejection.

The uptick nonetheless caught some by surprise, data shows, with liquidations nearing $300 million over the past 24 hours.

Funding rates, which on Sunday were neutral, are meanwhile also climbing, signalling the return of optimism over a reliable BTC price rebound — and the risk that implies.

“All it took was a +7% Daily candle to dissolve all fears and worries of a new BTC Bear Market,” Rekt Capital added.

BTC/USD, he said, is “progressing favorably” when it comes to the monthly close due at the end of Tuesday.

Coronavirus and a March 2020 replay

Macro markets are expecting a turbulent start to the week as the new Coronavirus variant, omicron, continues to bite into sentiment.

“We really need some more answers to figure out the impact on growth,” Priya Misra, global head of rates strategy at TD Securities, told Bloomberg Monday.

“Risk assets are pricing in uncertainty.”

Last week was characterized by major volatility across the board as Bitcoin and altcoins followed stocks, oil and others in a blitz sell-off.

Asian markets look set to continue the trend on Monday’s open, with 1-2% drops slated at the time of writing.

With Bitcoin on the rise, any further jolts to macro structures may yet halt the newfound optimism.

Bulls are hoping that the scenario will play out in a similar fashion to March 2020, when a cross-crypto rout as Coronavirus entered the world stage subsequently sparked a surge which eclipsed previous price highs.

Nonetheless, Bitcoin did not escape unscathed last week, as some familiar faces lined up to pour scorn on what they claim is by no means an escape from risk. Those concerned about a retracement from current levels potentially need not look too far down the BTC price chart.

According to the latest orderbook data from analytics resource Material Scientist, a giant buy wall is now in place and should keep the market above $50,000.

The stakes may be high, as some said this weekend that a failure to hold that level would cause them to rethink their approach to Bitcoin, but given the sheer size of support, this now seems less likely.

“Not sure why you're all so scared,” Material Scientist summarized on Twitter Sunday.

“This is largest bid since the 30k bottom.”

“Essentially, 1 actor has the entire market in their grip,” it explained.

“They knew 1 month in advance how this whole thing was gonna play out.”

$70,000 thus forms the seminal point of focus for bulls eager to see a continuation of the bull run before Q4 2021 is out.

The next few weeks will be “very telling” for Bitcoin as it makes or breaks some significant correlations.

That was the conclusion from popular Twitter analyst TechDev at the weekend as Bitcoin continued to replicate gold’s journey from the 1970s.

The curious, even eerie, similarities between BTC/USD in 2020-21 and XAU/USD fifty years ago have endured despite some volatility anomalies in Bitcoin price action.

Should the trend continue, Bitcoin faces a dramatic run-up with a price top of up to $280,000. The deadline: mid-February 2022.

“1970's gold fractal now precisely aligned and anchored to both local high and low,” commented in an update on events.

“Only Dec/Jan affected with model extending to 1st half Feb.” 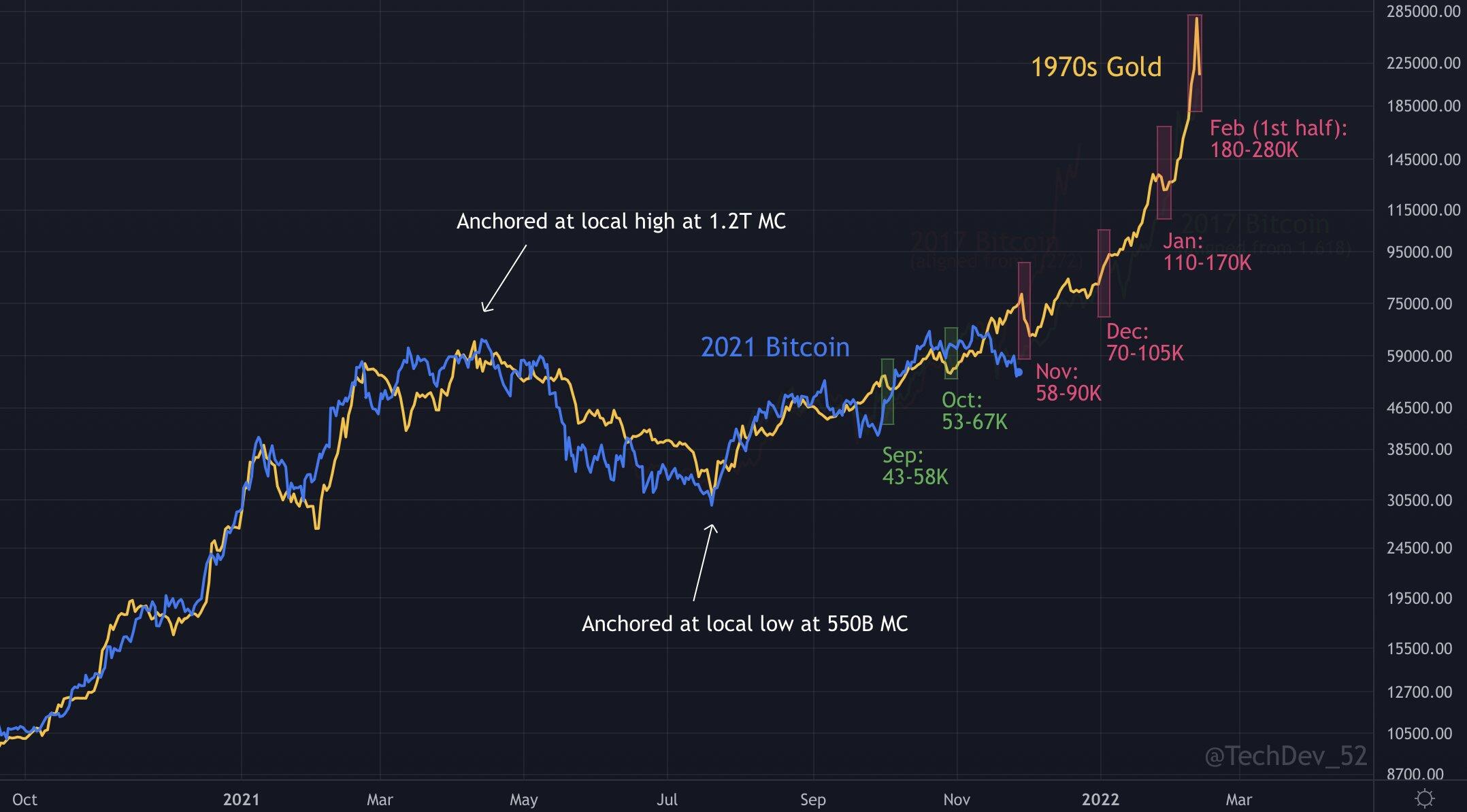 An accompanying breakdown of each projected phase of Bitcoin’s metamorphosis since September presents this month as falling outside the predicted trajectory. December should see between $70,000 and $110,000 for BTC/USD.

Beyond gold and it’s Fibonacci sequences which dictate two other correlations which face their moment of truth in the coming weeks.

These both involve Bitcoin’s relation to its 2017 performance, and so far, both remain valid. Should one win over the other, the pace and height of the price gains will change accordingly.

“Mid-Dec to End-Jan with a ~230K top remains my base case,” TechDev wrote.

“Obviously the earlier side of that window looks less likely. I couldn't care less if it's right. I've seen compelling work suggesting a top from mid-Dec to mid-March, with targets from 120K-260K.”

Responding to praise from Global Macro Investor founder Raoul Pal, he added that the coming weeks would be “very telling” for all three correlations.

Where will Bitcoin end “Moonvember”?

This was once the multimillion dollar question on everyone’s lips — but now, acceptance is slowly spreading that this bull market may take longer than planned to mature.

Despite this, optimism for the short term remains.

In a survey conducted on Twitter by the @Bitcoin account which ended Monday, the majority of almost 50,000 respondents predicted that BTC/USD would finish November above $60,000. Without zooming out, it’s easy to forget just how far Bitcoin has come in the past twelve months. As Cointelegraph noted, last Thanksgiving — which conveniently also saw a brief sell-off — BTC/USD traded at just under $16,500.

As quant analyst Benjamin Cowen summarized this weekend, “do not miss the forest for the trees.”