Ethereum’s chain war started as a poll on Twitter by hedge fund Galois Capital. The battle between supporters of proof-of-work and proof-of-stake intensified as stablecoin USD Tether picked sides. It remains to be seen whether the Merge will result in a successful and stable transition to proof-of-stake, or a fork will precede the event.

Also read: What will happen if the Ethereum Merge fails: ETC, ETH1 or ETH2?

Ethereum chain wars and how it started

Kevin Zhou of Galois Capital sparked the debate of parallel Ethereum proof-of-work and proof-of-stake chains and a triple hardfork. Zhou believes it would be naive to exclude the possibility of a proof-of-work chain as miners like Chandler Guo are ready to fork Ethereum.

Question 1: What happens during the merge? If Choice 2 or 3 go to Questions 2-5.

Zhou believes there is a possibility that a hard fork results in three chains:

Zhou remains unconvinced of a successful transition to the proof-of-stake merge. The Galois Capital co-founder is convinced that hiccups or disagreement within the community could result in parallel chains and the adoption of ETHW (PoW chain) and a basket of Ethereum (both or all three chains) by exchanges, wallets and lending/ staking platforms.

Exchanges and top crypto projects have started picking sides. Tether announced that the stablecoin has put its weight behind proof-of-stake Ethereum. Around the same time, BitMEX and Poloniex welcomed ETHW (proof-of-work) contracts.

A new ETHPOW futures listing is LIVE on BitMEX…

…meaning users can now long/short $ETHPOW $USDT, with up to 2x leverage.

The BitMEX Research team recently published a blog on Merge and post-Merge possibilities. The team believes there is a likelihood of a chain split that could result in a new ETH proof-of-work (PoW) chain. ETHPoW Linear Futures Contract is now live on BitMEX, margined in USDT. The exchange is offering up to 2x leverage on the ETHPOWZ22 contract.

One of the largest stablecoins with a market capitalization of $66.47 billion has put its weight behind Ethereum’s proof-of-stake chain. Tether believes that in order to avoid any disruption to the crypto community, DeFi projects and platforms, the transition to PoS should not be weaponized.

Tether announced that it is closely following the progress of Ethereum’s Merge, as the altcoin transitions to a power-efficient consensus mechanism.

Tether is currently the largest stablecoin in the market, USDT remains the most used stablecoin on the Ethereum blockchain with three times more people holding Tether in their wallet than any other stablecoin. Therefore, Tether’s decision to support Ethereum’s proof-of-stake chain reassures the community of the stablecoin’s support for ETH foundation and the Merge.

Analysts believe Ethereum price could plummet before run up to $2,000

@PostyXBT, a crypto analyst and trader evaluated the Ethereum price trend and noted that ETH is ahead of Bitcoin. The analyst argues that Ethereum price is likely to witness a drop before the next leg. 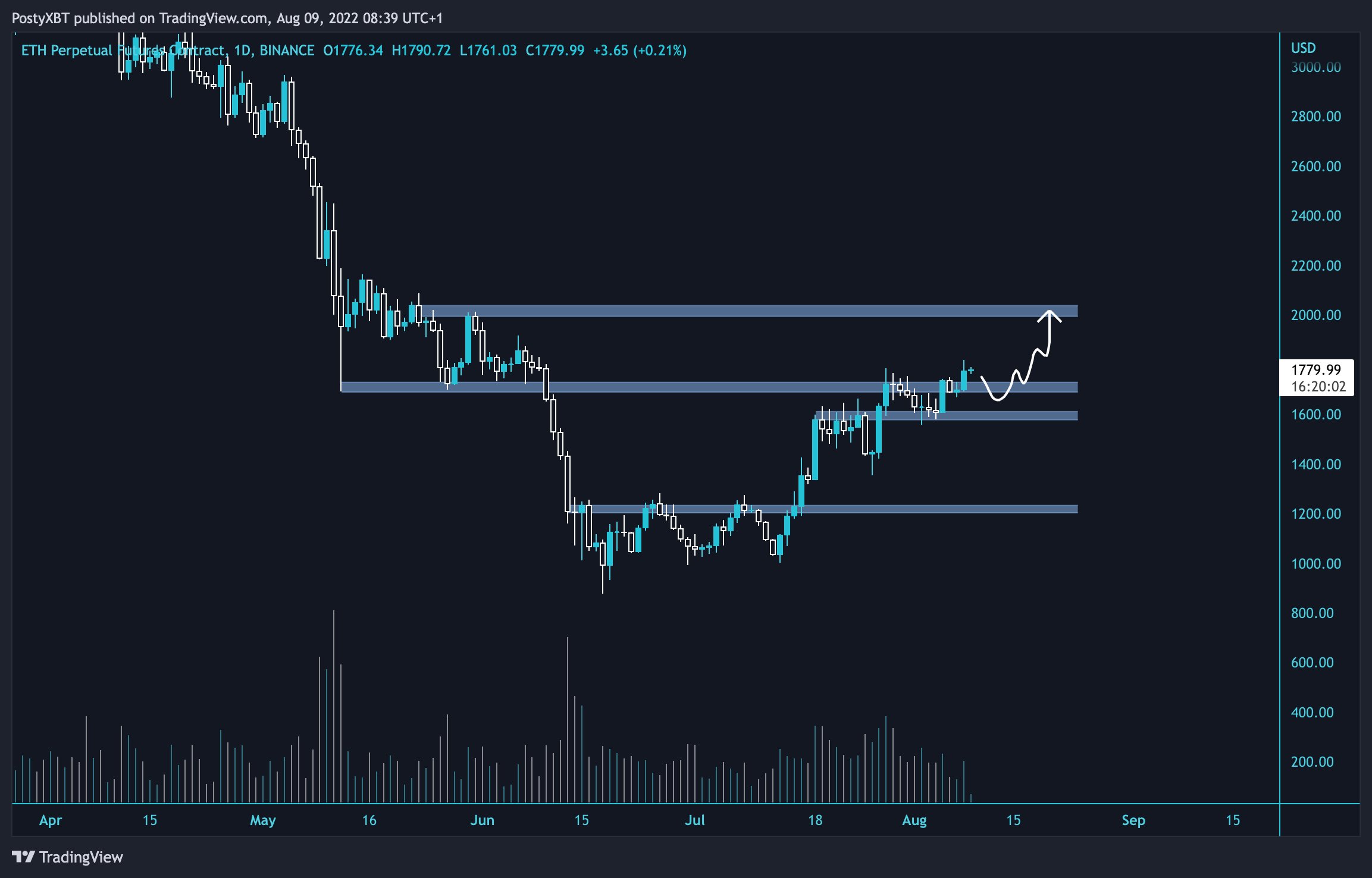 @NekozTek, another crypto analyst shares the same view. The analyst has predicted a decline in Ethereum price to the demand zone between $1,560 and $1,640. 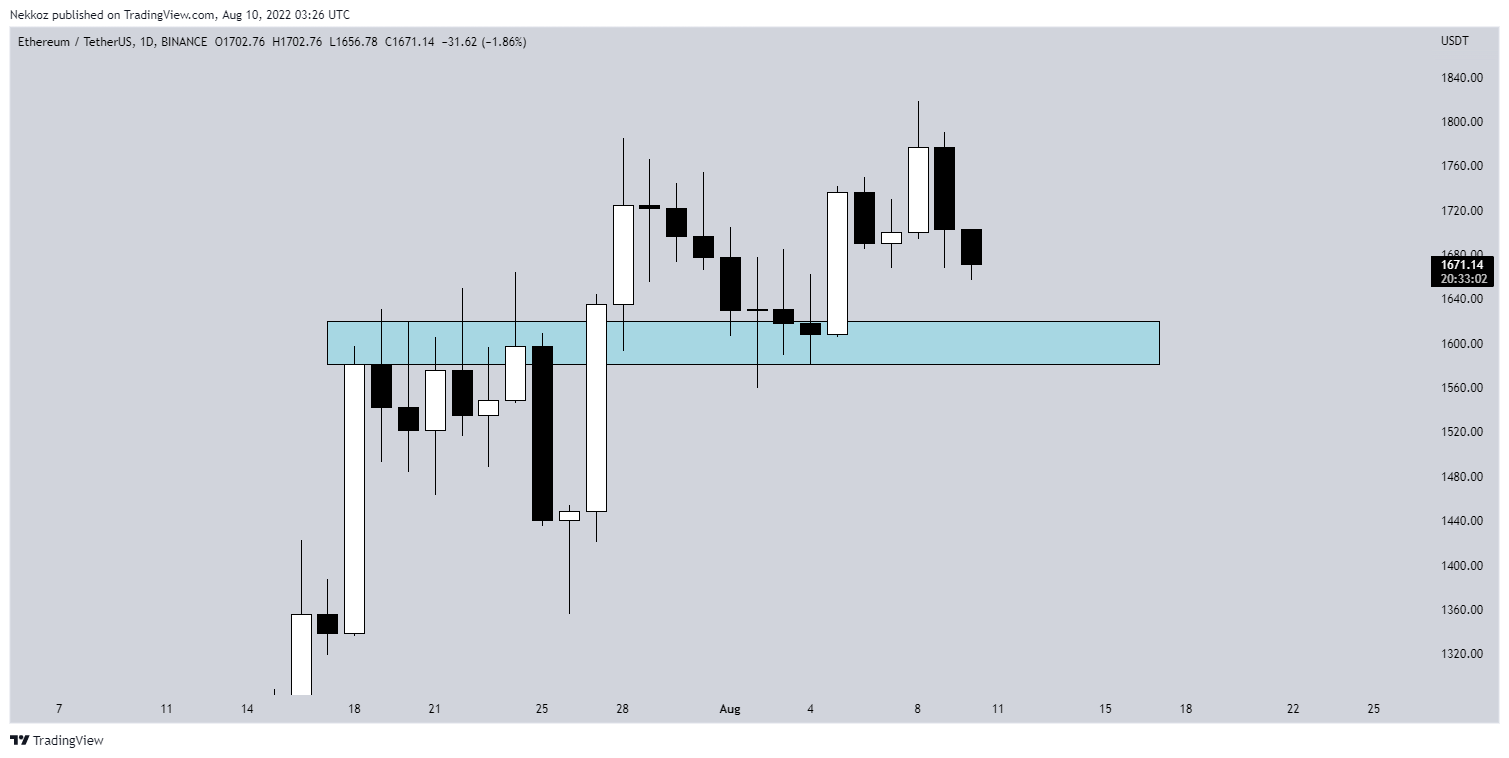 FXStreet analysts have identified buying opportunities in Ethereum price in the following video.