Bitcoin is continuing in its parabolic moves, adding 17.5% since last week. After two attempted breakouts, BTC has found a strong resistance around $11.2k. Although BTC spiked above the resistance yesterday, it almost immediately corrected towards $10.5k. Ethereum closed last week above $300 for the first time this year, adding more than 13%. The rest of the top-30 market is mostly following the bullish trend, NEO adding 21.4%, and XMR is up by more than 18%. 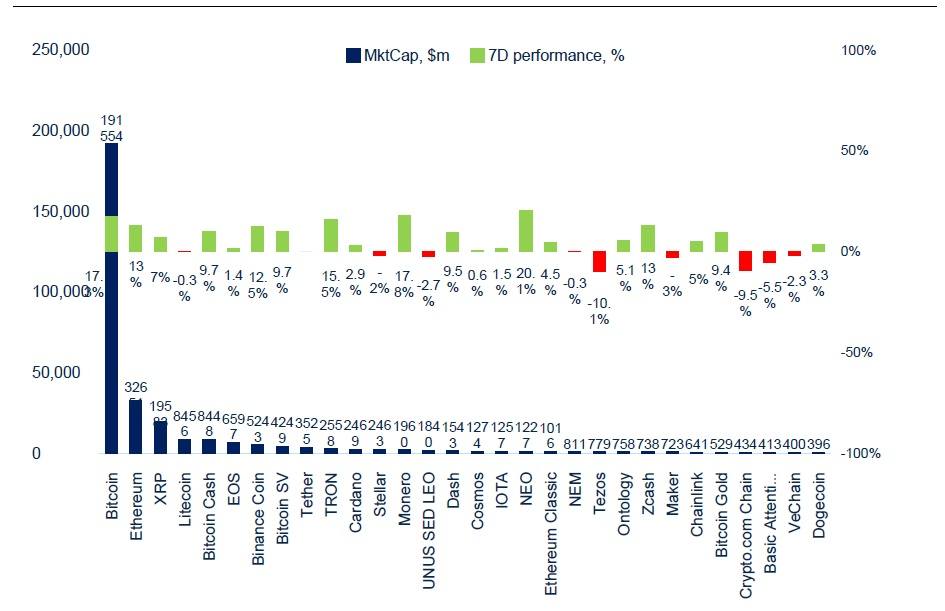 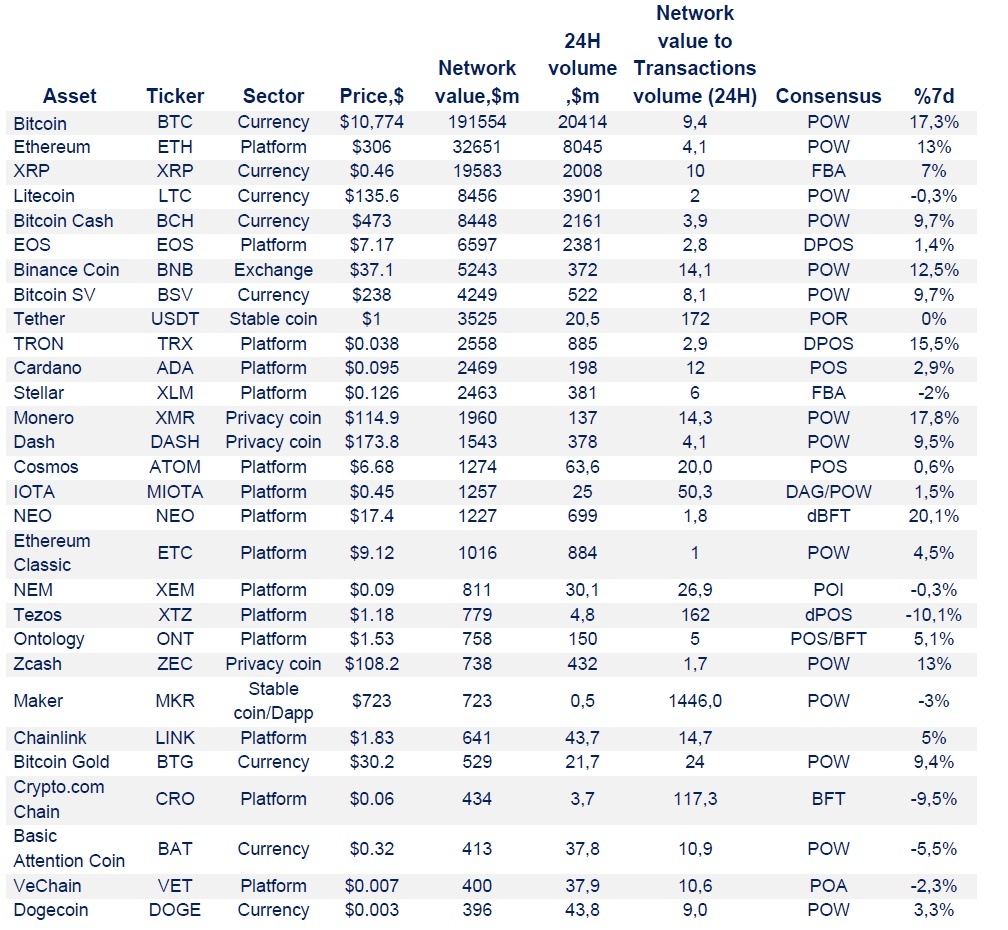 Facebook Releases Libra Details
Facebook has released the official website and white paper describing its digital currency called Libra. Libra is a stablecoin, pegged to the U.S. dollar and other major currencies, and is expected to be integrated as a payment tool on Facebook's popular messaging apps WhatsApp and Messenger, and photo-sharing app Instagram. At launch, you'll be able to send Libra inside of Facebook Messenger and WhatsApp, with the main intention for it to be used as an intermediary for transferring traditional currencies. Eventually, Facebook hopes Libra will be accepted as a form of payment, and other financial services will be built on top of its blockchain-based network.

Polish Bank Alior Uses Ethereum for New Document Authentication
Warsaw-based Alior announced that it is beginning to offer a feature that will allow customers to check on the authentication and integrity of official documents they receive using the public Ethereum blockchain that supports Ether.

MetLife Plans to Disrupt $2.7 Trillion Insurance Industry Using Ethereum Blockchain
MetLife is utilizing the live public Ethereum blockchain to add transparency and efficiency to the claims process. In what is believed to be the first pilot program in the world focused on the life insurance industry, MetLife's Singapore-based incubator LumenLab is collaborating with Singapore Press Holdings (SPH) and NTUC Income on a platform of smart contracts known as Lifechain to help its customers quickly determine if the deceased was protected with a policy and to automatically file a claim.

Ethereum 2.0 Phase Zero Scheduled for January 3, 2020
The first stage of the Ethereum network's transition to Ethereum 2.0 is expected to take place on January 3, 2020. Phase Zero is the name of the first transition stage of the Ethereum network from a proof-of-work to a proof-of-stake consensus algorithm, which would pass block validation function from miners to special network validators.

Bitmain Plans to Raise $300 - $500 Million in US IPO
Cryptocurrency mining giant Bitmain Technologies is planning on conducting an initial public offering (IPO) in the U.S. The company aims to raise $300-$500 million from the offering, which could launch "as soon as the second half of this year." Bitmain is reportedly already in discussions with advisers for the IPO and could file documents with the U.S. Securities and Exchange Commission next month.

Facebook to Issue Security Token
The tokens to be released include not only the aforementioned ‘Libra', but a second which will act as a security token. This will be known as the Libra Investment Token. This token will be distributed to early investors. Investors in the Libra Investment Token will be part of the Libra Association Council. Each will receive equity share in the reserve, providing them with dividends garnered from the interest generated on the reserve, along with certain voting rights.

EU Regulators Call for Central Bank Review of Facebook Cryptocurrency
Facebook Inc.'s ambitious plan to roll out its own cryptocurrency ran into immediate political opposition in Europe, with calls for tighter regulation of the social media giant. French Finance Minister Bruno Le Maire said the digital currency known as Libra shouldn't be seen as a replacement for traditional currencies. France is creating a G7 task force to study how central banks ensure cryptocurrencies like Facebook's Libra are governed by regulations ranging from money-laundering laws to consumer-protection rules, France's Central Bank Governor said on Friday. Libra was also a talking point at the European Central Bank's annual symposium in Sintra, Portugal, where Bank of England Governor Mark Carney referenced Libra. "Anything that works in this world will become instantly systemic and will have to be subject to the highest standards of regulation," he said. Markus Ferber, a German member of the European Parliament, said Facebook, with more than 2 billion users, could become a "shadow bank" and that regulators should be on high alert. Switzerland's financial regulator FINMA said on Tuesday that it is in contact with the "initiators" of Libra, Facebook's planned cryptocurrency.

US Lawmakers Call for Facebook to Pause Libra Project
A leading U.S. House lawmaker on Tuesday called on Facebook Inc to halt development on its new cryptocurrency and for company executives to testify before Congress, adding to global concerns about what the digital currency could mean for data privacy and security. The U.S. Senate Banking Committee will hold a hearing on July 16 regarding Facebook's new cryptocurrency, Libra.

FATF to Release New International Standards for Crypto Businesses
The Financial Action Task Force (FATF) has proposed a set of new international standards for crypto businesses, which will be discussed during the upcoming V20 Summit on 21 July 2019. You can read a comprehensive analysis of FATF's proposal here. 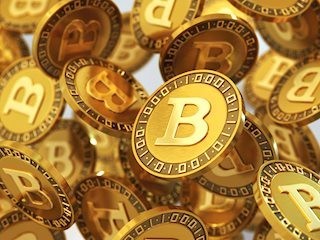 Bitcoin (BTC) has settled below $8,700 after a short-lived move to $8,791 during early Asian hours. The first digital coin has stayed mostly unchanged both on a day-to-day basis.

Ethereum is the most correlated crypto asset, research shows

Ethereum, the second-largest digital asset with the current market value of $18.4 billion, has lost nearly 1% since the beginning of Wednesday and stayed unchanged on a day-to-day basis.

Ethereum Classic surge is still on despite the bearish wave across the cryptocurrency landscape. The digital asset has corrected 4.47% higher on the day.