While the long-term sentiment remains bullish, traders warn that BTC must hold the $41,000 support to avoid a sweep of the $38,000 level.

Bitcoin faced another day of bearish pressure on Sept. 29 as the impact of China's crypto crackdown and uncertainty about the regulatory landscape in the United States continue to weigh heavily on Bitcoin (BTC) and some of the larger-cap altcoins.

Data from Cointelegraph Markets Pro and TradingView shows that the early morning rally above $42,000 lost steam by midday as the price collapsed back near the $41,000 support level where bulls are now defending against a further price decline. 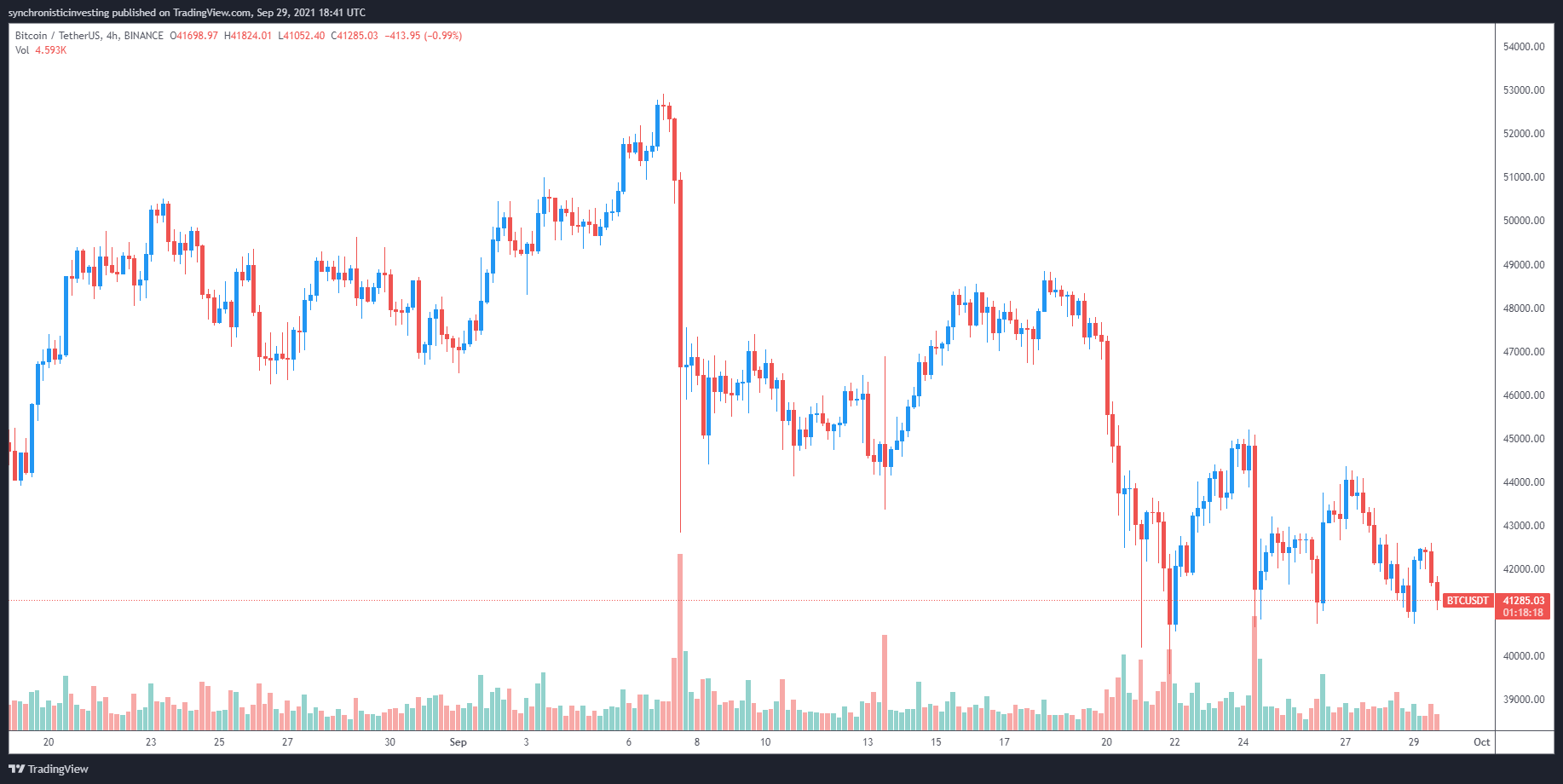 Here’s a look at what traders and analysts are saying about Bitcoin price today.

Despite the recent volatility, the current price action is considered to be “boring” by market analyst and Cointelegraph contributor Michaël van de Poppe, who posted the following tweet highlighting that Bitcoin price remains above the crucial support levels he views as important.

Quite boring market here on #Bitcoin.

I'd prefer to see a breaker above $43.8K to conclude we're done with the correction.

Based on the chart above, van de Poppe suggested that Bitcoin could trade sideways in a consolidation pattern for a couple of weeks before heading higher.

As for what might excite the analyst out of his current malaise, van de Poppe said that a price breakout above $43,800 would signal that the current correction is over. 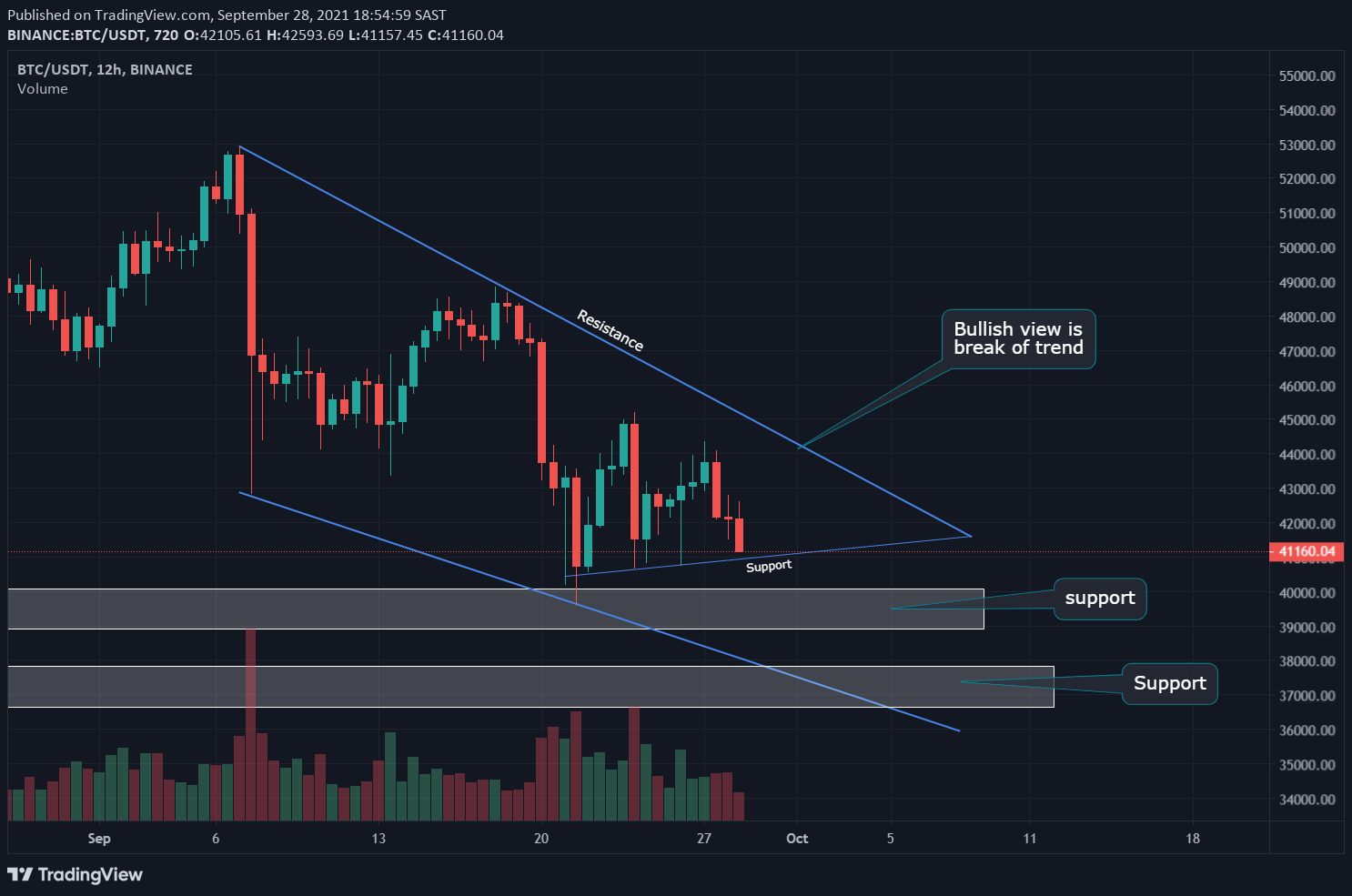 “Stock markets showing some weakness, short term support on $BTC, if we lose it, next possible zone is $38K - 40K. Right now I have taken a lot of buys and just being patient with the market.”

The concern about a possible retest of lower support levels was echoed by crypto Twitter trader ‘Crypto_Ed_NL’, who posted the following tweet outlining a drop to the support level near $41,250. 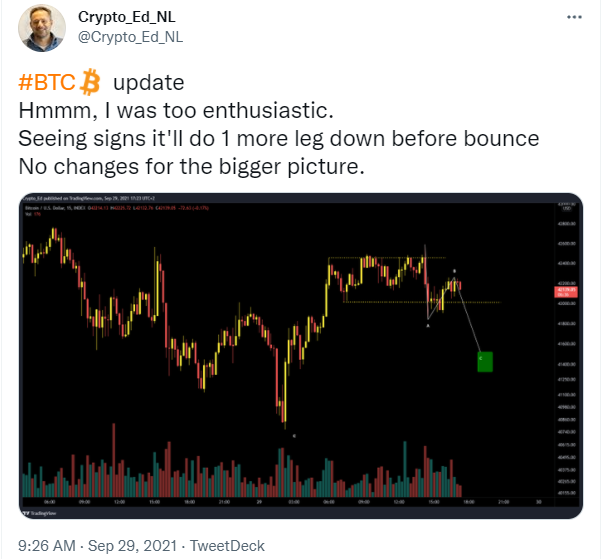 As highlighted by Crypto_Ed_NL, a previous tweet where the analyst stated "I think we'll do a correction when Binance comes back online" was a little premature and predicted in this follow-up tweet that BTC could see another leg down before the bounce occurs.

This has turned out to be a prescient observation because the price of BTC is trading at a price of $41,300 at the time of writing.

Despite the recent market downturn and increased volatility, Crypto_Ed_NL still feels that the long-term projections of a higher price for BTC remain intact.