The rally on the cryptocurrency market has slowed down as Bitcoin, and many altcoins have retreated from the recent highs. Despite the downside correction, the overall sentiments are still bullish, meaning that the growth may be resumed. The meaningful retreat may be regarded as a chance to re-enter the market at lower prices.

However, several major altcoins are outperforming the market. Bitcoin Cash is about 10% higher on a day-to-day basis. Dogecoin has gone through the roof with 30% gains after Elon Musk's tweet.

BTC topped at $24,300 on Sunday and retreated to $23,750 by the time of writing. The pioneer cryptocurrency gained over 24% on a week-to-week basis, while its market capitalization increased to $442 billion, which is equal to 66% of the total value of all digital assets in circulation.

The on-chain data and technical indicators show that Bitcoin may be ready to resume the upside and potentially test new all-time highs until the end of the year.

Bitcoin's Age Consumed indicator implies that the lull may be short-lived. This metric reveals how many BTC have changed addresses on a given day multiplied by the number of days since they last moved. A spike of this metric is a harbinger of the upcoming volatility as it means that a significant amount of previously idle BTC tokens are moving between addresses.

Meanwhile, Bitcoin's holders' distribution data show that the number of whales holding from 10,000 to 100,000 coins is close to all-time highs. As large investors are buying, their demand may eventually transform into an immense upside pressure.

BTC, Global In/Out of the Money

Global In/Out of the Money shows that the first significant support comes on approach to $22,800 as about 1 million addresses purchased over 600,000 BTC on approach to that level. As long as the price stays above this area, Bitcoin has more room to go up.

Ethereum hit the top at $677 on December 17 and retreated to $631 by the time of writing. The second-largest digital asset with the current market value of $73 billion lost nearly 4% on a day-to-day basis, though it is still 9% higher on a weekly basis. 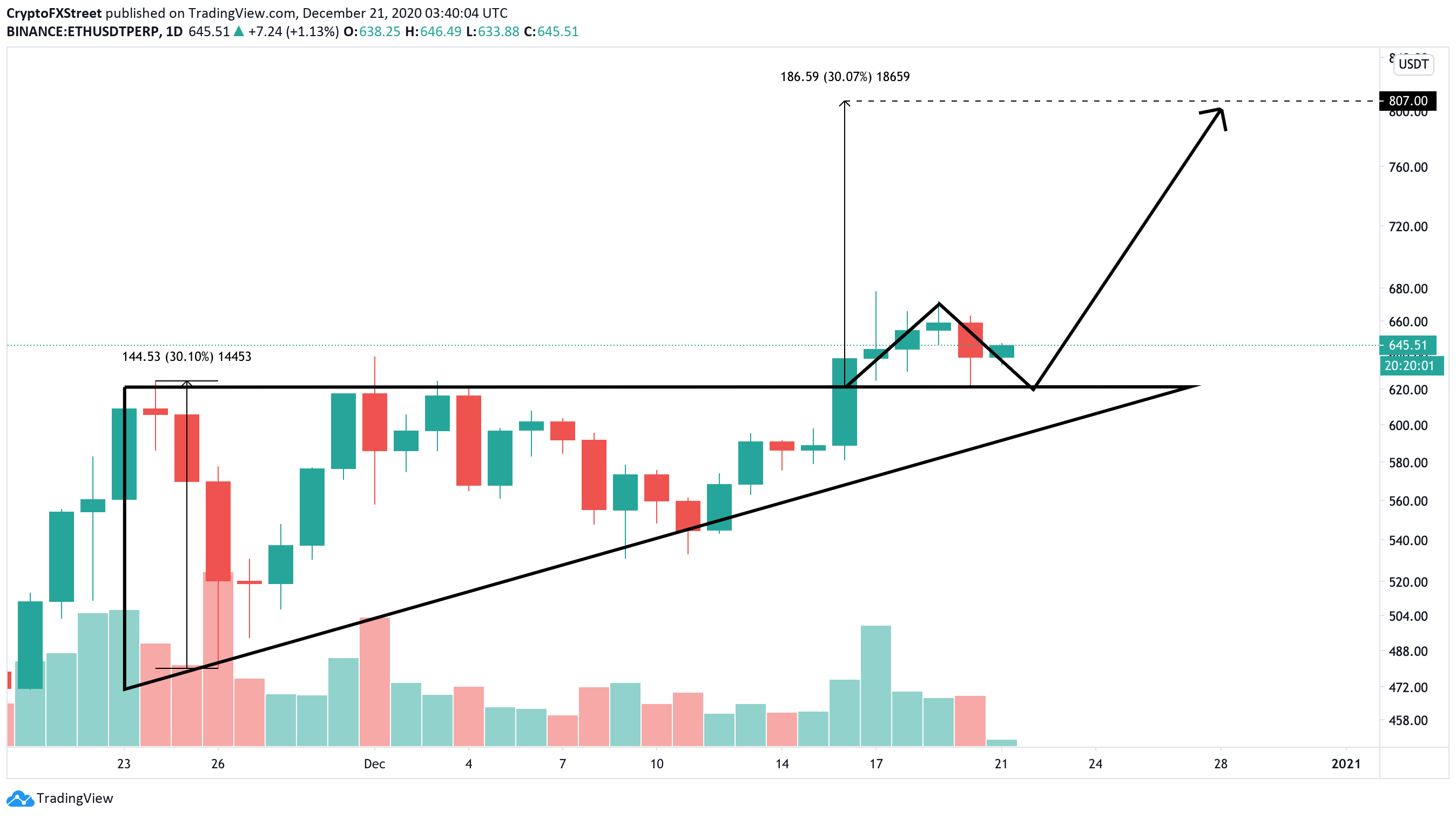 From the technical point of view, ETH broke above the x-axis of an ascending triangle at $620. The price returned to this barrier to retest it as a support, and as long as it holds, ETH is poised for a further increase with the potential target at $800. A sustainable move below this area will invalidate the immediate bullish scenario and open up the way to an extended correction towards $530 (daily EMA50).

Ripple's XRP has lost over 6% on a day-to-day basis to trade at $0.54 by the time of writing. The third-largest digital asset failed to capitalize on the recent Bitcoin's rally and dropped below critical $0.6. 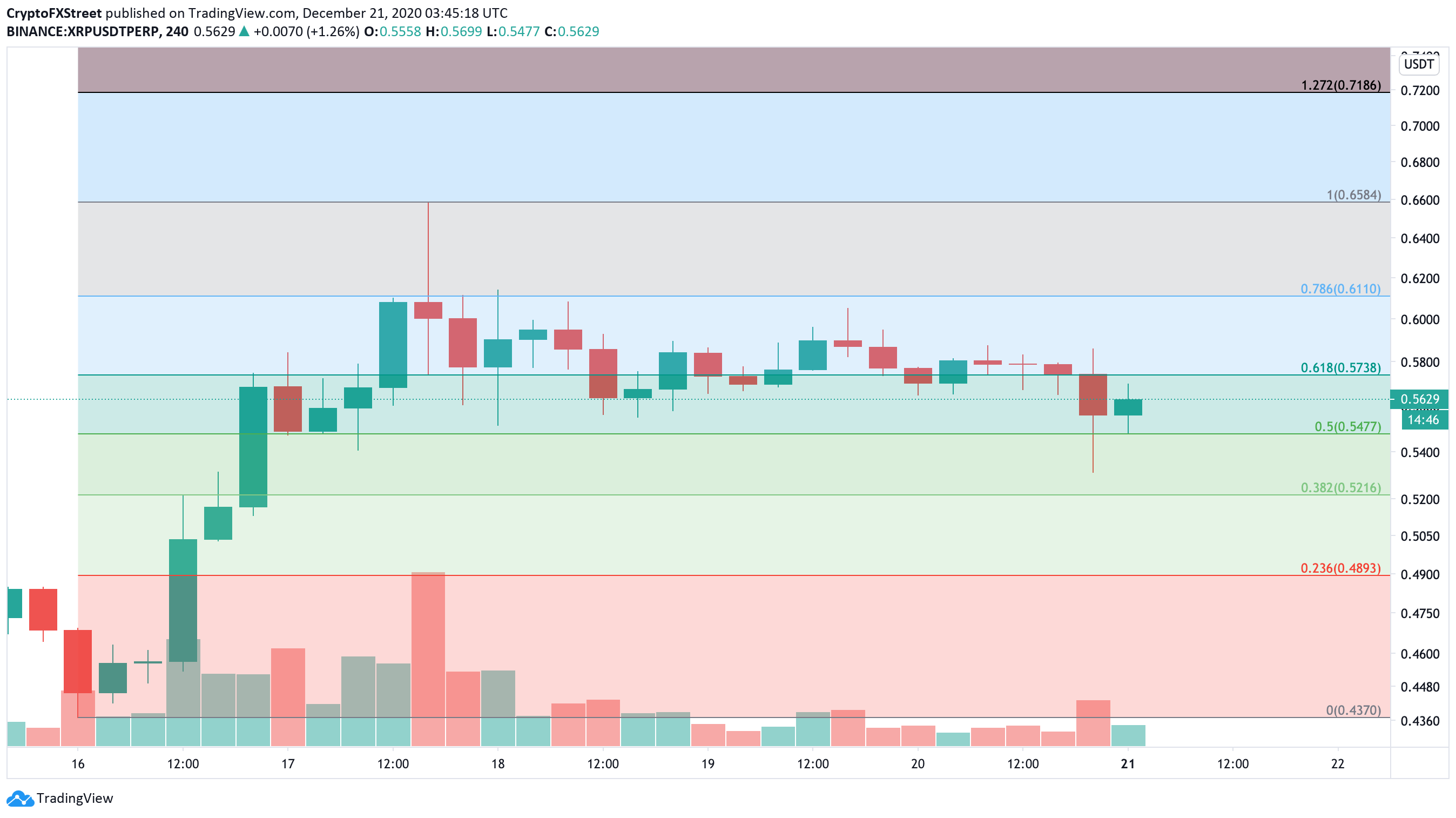 Despite the sell-off, a prominent trader and analyst, Peter Brandt, insists that XRP is poised to retest $1 regardless of the volatility. However, the coin needs to regain ground above $0.61 before this forecast may come true. This barrier is created by 78.6% Fibonacci retracement level. A 4-hr candlestick close above it could help propel this cryptocurrency higher.

On the other hand, a sustainable move below $0.54 (50% Fibo retracement) will worsen the technical picture and push the price to $0.50.