The 12-hour chart reveals a unique topping process, with the probability of a head-and-shoulders pattern seizing the narrative from the longstanding bullish projections for the bellwether cryptocurrency. The pattern began forming at the March high.

Adding to the pattern’s strength is that the right shoulder is being defined by a minor head-and-shoulders pattern, providing an earlier entry price for eager bearish speculators. The measured move target of the minor pattern is 10%, with a price target of $53,357. The initial decline would put Bitcoin price below two tactical moving averages on the 12-hour chart.

A final addition to the new bearish narrative is the approaching “Death Cross” on the 12-hour chart, as the 50 twelve-hour simple moving average (SMA) at $55,308 is edging closer to the 200 twelve-hour SMA at $53,524. The potential crossover would signal a decisive downturn for the flagship cryptocurrency and increase the validity of the bearish narrative now being presented.

If Bitcoin price undercuts the neckline of the minor head-and-shoulders pattern, it will target a race to $53,357, followed by a lunge down to the neckline of the major head-and-shoulders pattern currently at $45,630. Some support will surface at that price level, but the critical barrier to the full completion of the bearish outlook is the 38.2% Fibonacci retracement of the March 2020-April 2021 rally at $41,581.

A failure to hold the 38.2% retracement exposes Bitcoin price to an immediate decline to the intersection of the 50% retracement at $34,378 with the bigger head-and-shoulders measured move target of $33,885, representing a 25% decline from the neckline and a 39% plunge from price at the time of writing. 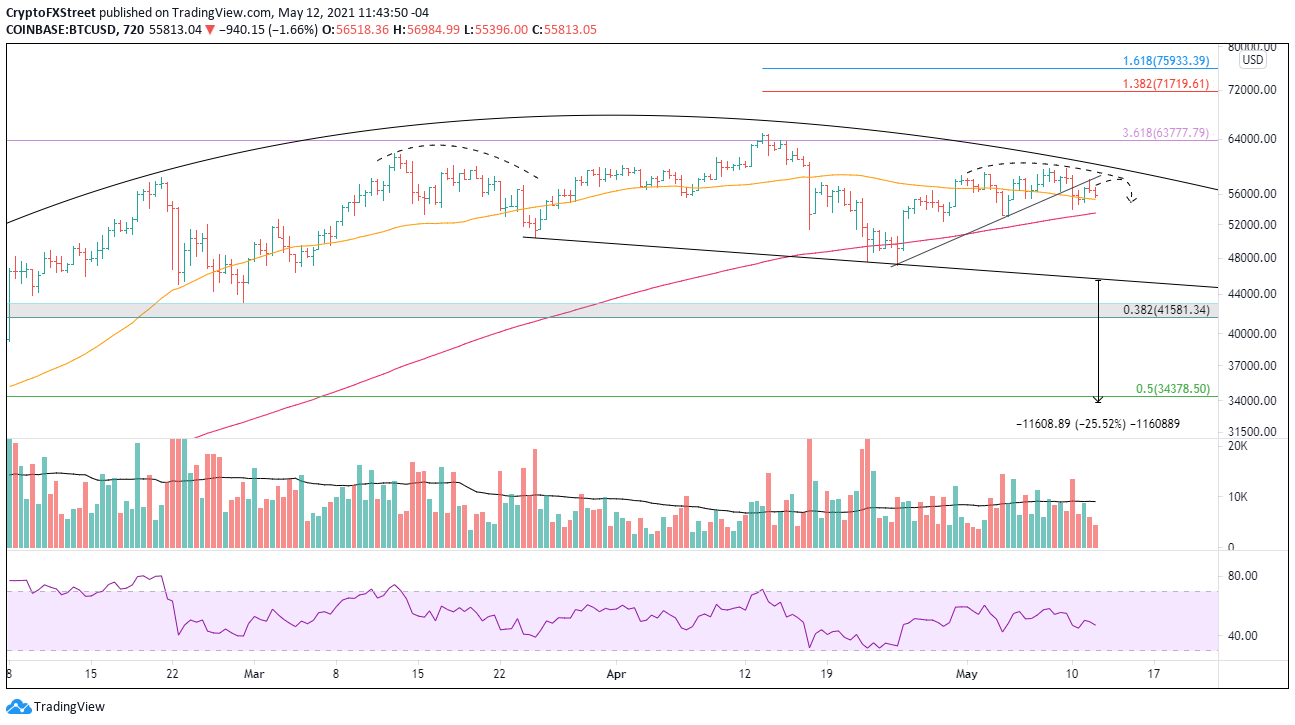 Over the last seven weeks of gains, Ethereum price has rallied almost 150%, establishing it as one of the best seven-week periods in the history of the altcoin. As a result, daily and weekly Relative Strength Index (RSI) readings strike an overbought condition. Still, in the case of the daily RSI, there is no bearish momentum divergence that could undermine the medium-term bullish outlook.

For the last three days, Ethereum price has struggled with the 361.8% Fibonacci extension of the April 22-23 decline at $4,232. Part of the restlessness can be attributed to the magnet effect of large round numbers, in this case, $4,000.

Due to the overbought condition and a potential unfolding of a collective top in the cryptocurrency market, Ethereum price could undergo a corrective process that may test the 261.8% extension of the 2018 decline at $3,587, or even the 38.2% retracement of the February-May advance at $3,202. 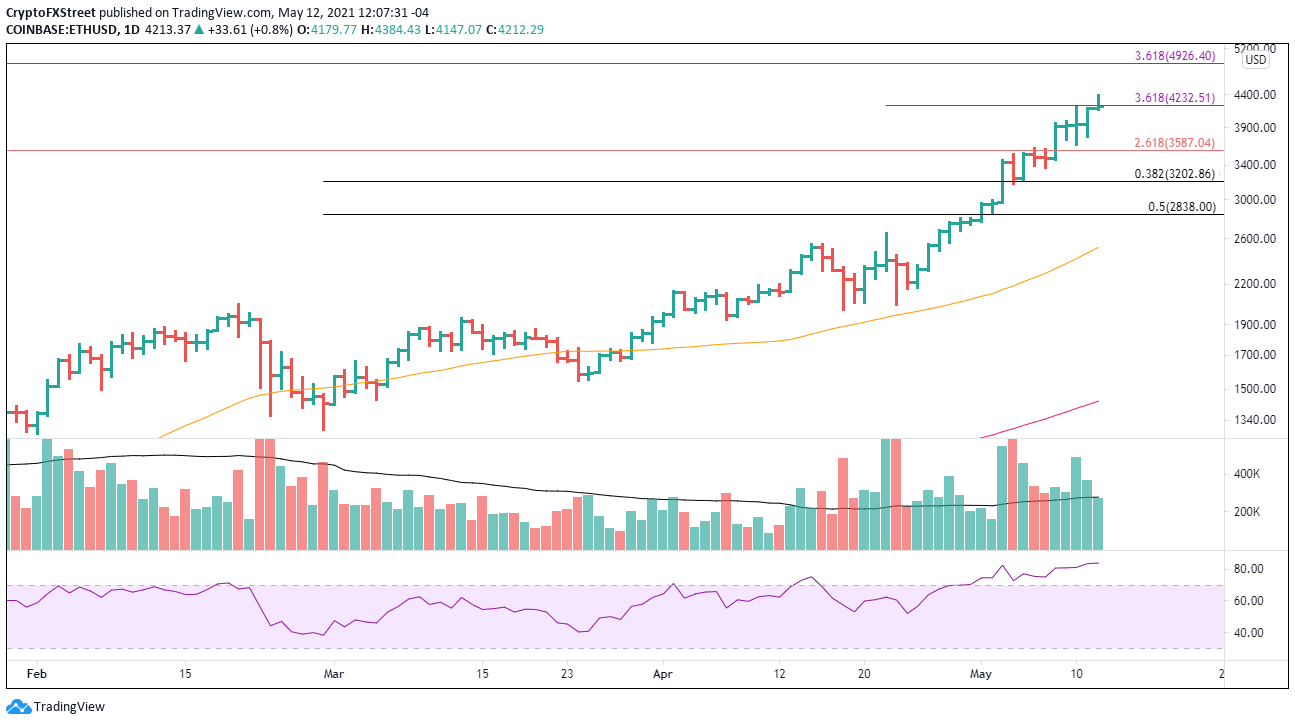 In light of the tremendous momentum, it is conceivable that Ethereum price extends the advance to the 361.8% extension of the 2018 market decline in the immediate future. It would be a gain of around 15% from price at the time of writing.

On May 10, XRP price triggered a bearish double top pattern with a trade below $1.315. It has since bounced back, but the 50 twelve-hour moving average has turned downwards, adding increased pressure on the international settlements token.

A jump in selling pressure should throw XRP price below the May 10 low at $1.225 and the 100 twelve-hour moving average at $1.186. Additional support appears at the 50% retracement of the 2021 advance at $1.067, but the most recognizable support is the psychologically important $1.00.

If XRP price cannot manufacture a rebound from around $1.00, Ripple will test the support framed by the April low at $0.874 and the 61.8% Fibonacci retracement at $0.856. The price range defined by the November 2020 high at $0.780 and the February high at $0.757 should arrest any residual selling pressure. 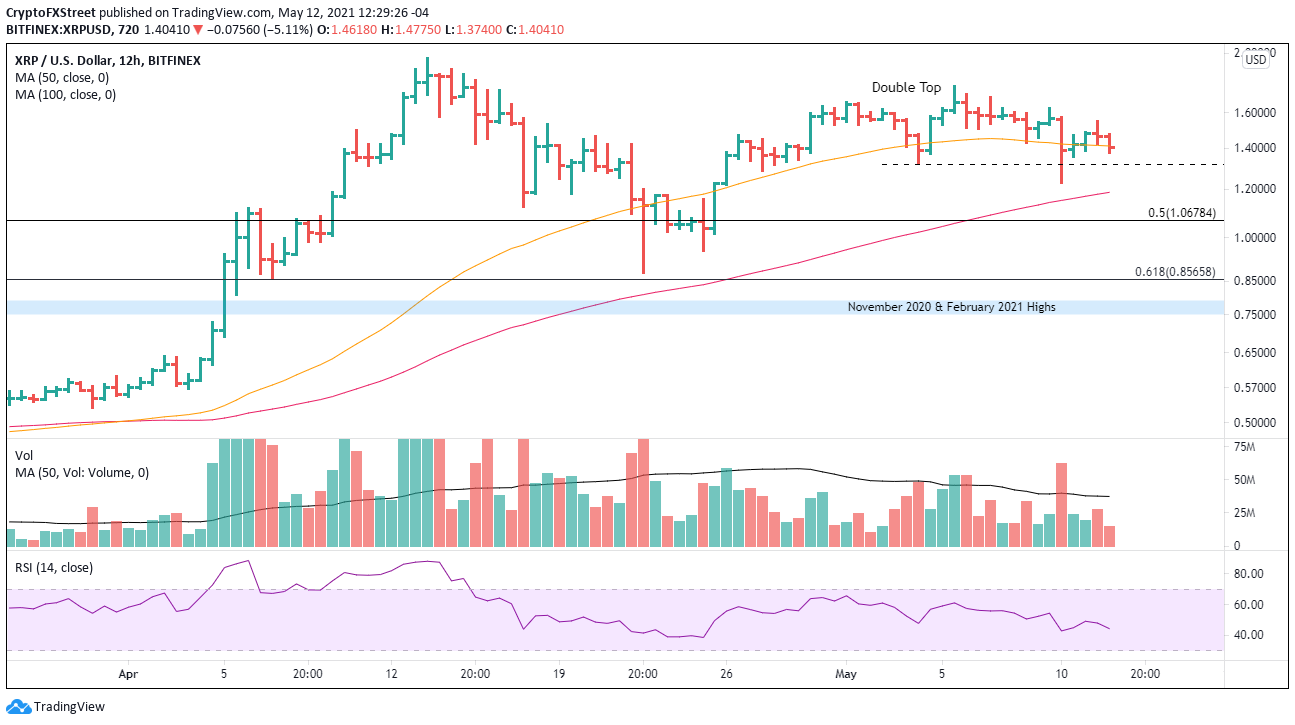 For now, a bullish resolution to the May price oscillations seems remote, but a rally above the May 5 high at $1.765 would force a reconsideration of the developing bearish thesis.