A confluence of technical and fundamental indicators suggests that Ether could maintain its monthly bullish outlook despite the latest price correction.

The major move downhill for the world's second-largest cryptocurrency by market capitalization has prompted many analysts to predict additional declines. For instance, Clem Chambers, chief executive of financial analytics portal ADVFN, sees the recent ETH/USD plunge as reminiscent of the beginning of 2018's crypto crash that preceded a 24,000%-plus bull run. Ether surged more than 4,500% after bottoming out in March before it wiped off almost 60% of those gains in just two weeks of trading in May. Chambers noted that the ETH/USD exchange rate remained at risk of declining lower, adding that it might take "three and a half years’ time" for the pair to reclaim its all-time high.

Akash Girimath, financial correspondent at FXStreet, also noted the ETH/USD exchange rate could fall to $1,200, citing Santiment's 365-day market-value-to-realized-value (MVRV) model. The index measures the profit/loss status of investors who have purchased ETH in the past 12 months.

The metric's readings have declined from 120% to 57% since May 11, and the number of investors with profit-making ETH portfolios declined following the May 19 price crash. In turn, that increased the likelihood of other investors — those that remain in profits — unfolding their ETH positions in order to minimize their downside risks in the event of an extended price decline.

But amid the pessimistic scenarios, there also emerged narratives that supported the prospects of an early Ether price recovery.

Investors still have a month to adjust their bias toward Ethereum as the blockchain project prepares for a major network upgrade that is expected to come in July.

Dubbed Ethereum Improvement Proposal 1559, or EIP-1559, the update is anticipated to do away with the Ethereum network's major issue: higher transaction fees. It would do so by replacing Ethereum's "first-price-action" fee model with a base network fee that would fluctuate based on network demand.

Vitalik Buterin and Eric Conner, the author of EIP-1559, anticipate that the update would create a more efficient fee market and simplify the gas payment process for clients and decentralized application (DApp) software.

Meanwhile, EIP-1559 also proposes to burn transaction fees, thereby introducing deflation to the Ethereum ecosystem. Its impact on ETH prices could be similar to how Bitcoin (BTC) halvings impact BTC/USD exchange rates, with lower supply against higher demand leading up to higher prices.

Nevertheless, some believe that EIP-1559 is not as bullish for ETH as it appears to be. Kyle Samani, managing partner at Multicoin Capital, argued that if the bids for ETH/USD go up, Ethereum would still become expensive to use.

OKEx analyst Rick Delaney also appeared to be cautious in calling EIP-1559 an all-and-all bullish event for ETH. Nevertheless, he added that the proposal would make Ethereum attractive for wealthier investors.

"A potentially deflationary ETH — thanks to EIP-1559's fee-burn mechanism — may enhance the asset's appeal among the planet's wealthiest investors," Delaney said in April. "Similarly, the launch of staking as part of an ongoing upgrade to Ethereum 2.0 appears to be contributing to the current rising demand."

Decreasing amount of Ether on exchanges

Recent Glassnode data shows that ETH continues to flow out of cryptocurrency exchanges even after its 40% price crash.

The "Ethereum: Balance on Exchange — All Exchanges" metric shows that ETH reserves held across trading platforms' hot wallets dropped from 13.9 million on May 1 to 13.1 million on May 1 — a 5.75% drop. The consistent ETH withdrawals suggest that traders either want to hold on to their crypto holdings in anticipation of higher dollar-based returns in the future or want to deposit them in decentralized finance (DeFi) liquidity pools to earn consistent interest rate returns.

PostyXBT envisions ETH/USD trading inside an ascending triangle pattern, the first concrete structure that formed after the pair's correction from $4,384 to $3,590.

Generally, the triangle pattern surfaces during a bearish correction, and it could result in a continuation breakout move to the downside. Nevertheless, PostyXBT expects the price to maintain the triangle support while targeting its resistance trendline for a bullish breakout move. ETH/USDT setup for June, as per PostyXBT. Source: TradingView

"Nothing to bank on and no trade to take right now, just something that I am watching," the pseudonymous analyst added.

"No reason for aggressive entries in these market conditions. Lower low invalidates the idea."

The Crypto Cactus, another independent analyst, laid out a similar upside outlook for Ether, except they said the cryptocurrency was atop medium-term ascending trendline support, as shown in the chart below. 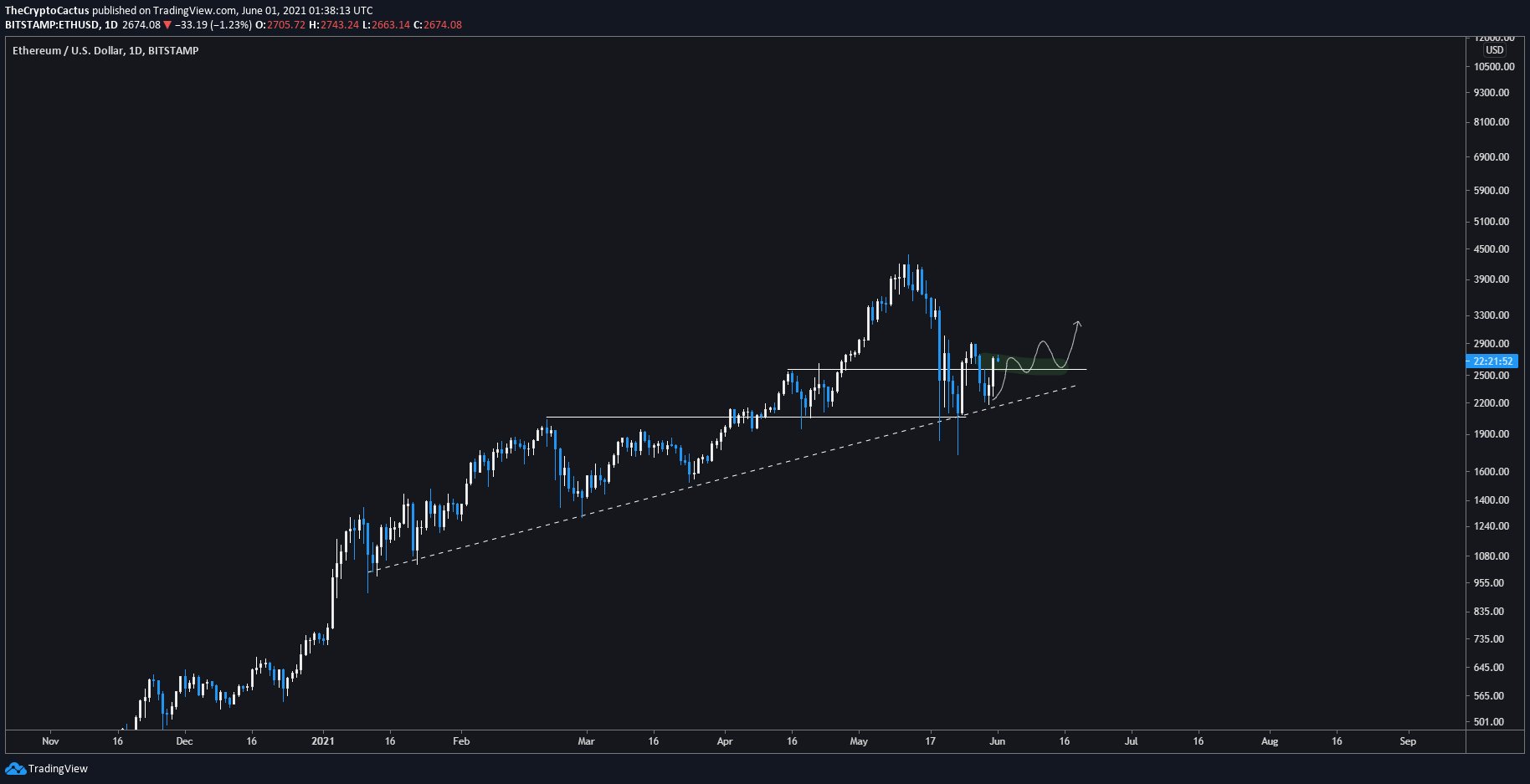 Ether trade setup, as per The Crypto Cactus. Source: TradingView

The analyst — who is cautious, like PostyXBT — noted that traders could enter a long position on a perfect retest of ETH's current resistance trendline (the horizontal line near the $2,500–$2,600 area).

"Still completely avoiding leverage as spot has swings move that enough to make it interesting," they added.