Bitcoin price has been down in the dumps with multiple failed attempts to escape the ranging market. Most altcoins promptly follow the flagship crypto, but Solana, Chainlink and Litecoin have a different plan and might recover quicker than the rest to hit new all-time highs.

From a technical perspective, Solana price has set up four higher highs and four higher lows since May 18. Connecting trend lines from these swing points shows that SOL is consolidating in a symmetrical triangle pattern.

SOL is currently attempting to break through the upper boundary, which will occur if the bulls produce a decisive daily candlestick close above $35.47.

This move would set up a higher high and end the 42-day downtrend, signaling to sidelined investors to jump on the bandwagon.

After this, Solana price has to clear a critical resistance barrier at $42.53. If this were to happen, it would open up the path to the current all-time high at $58.39. If the second phase of the bull run kick-starts, SOL could easily shatter $58.39 and scale to $173, coinciding with the 127.2% Fibonacci extension level.

Supporting this quick bullish thesis is the relative recovery of Solana compared to BTC and ETH. Throughout the bull run, Solana price showed massive run-ups, leading to huge returns. Even after the boom cycle seemingly ended, SOL price was shockingly resilient.

Since its all-time high at $58.39 on May 18, the market value of Solana has dropped roughly 67% and has recovered nearly 80% from the bottom.

Judged separately, these metrics might not sound impressive or help the case for Solana price, but BTC’s recovery from its bottom is only 20%, while ETH’s is 26%.

Going forward, investors can expect Solana price to continue its swift recovery, especially if it slices through $35.47. 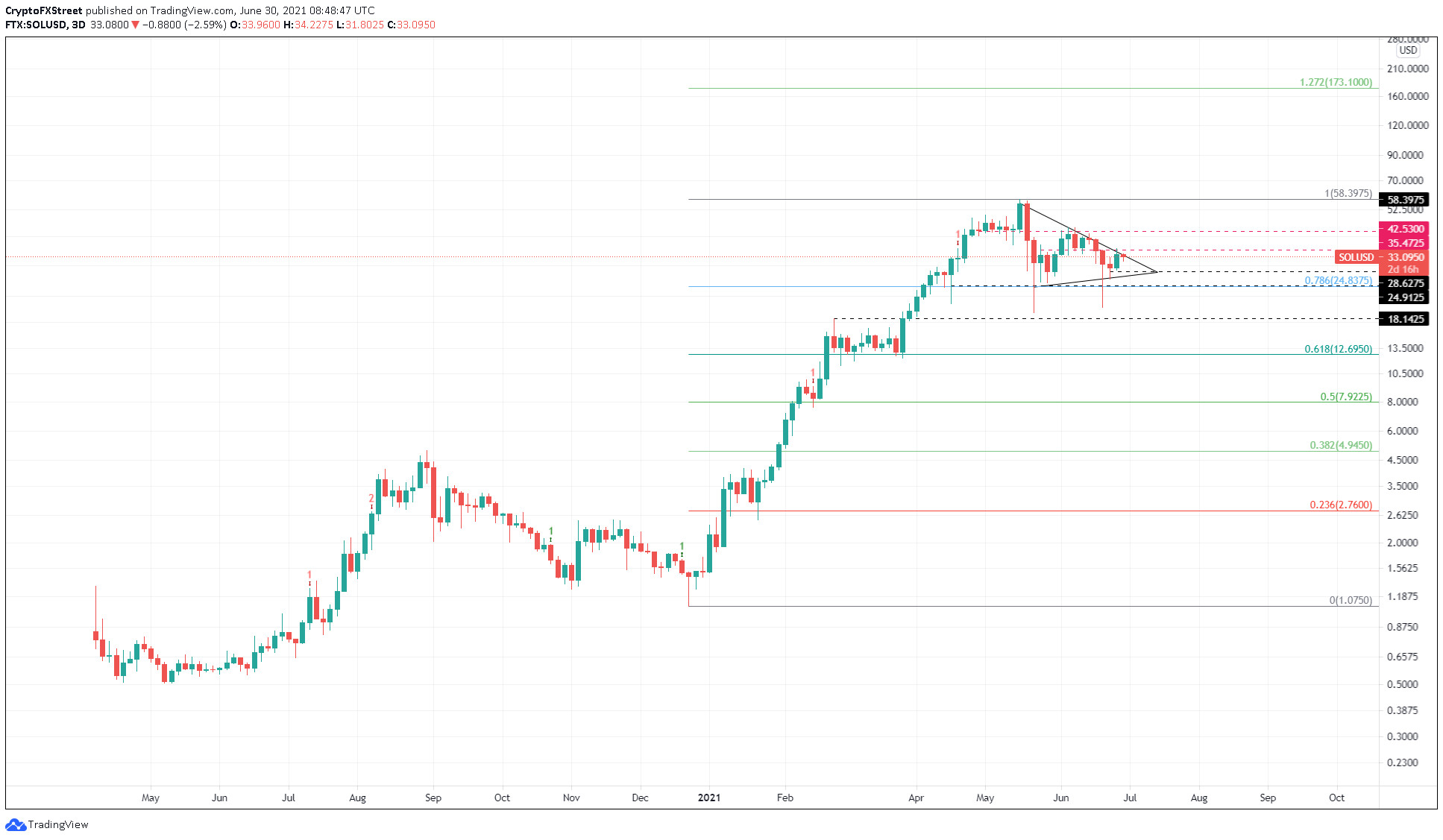 On the flip side, Solana price might head lower, bounce off the lower trend line at 28.63 or $27.32. Such a move would not affect the bullish thesis. However, a breakdown of the support barrier at $24.91 would end the optimistic narrative and might delay or halt the uptrend.

Chainlink price has not witnessed a good recovery like Solana or even Bitcoin. In fact, LINK is sticking very close to its bottom. The reason why Chainlink might soon hit its all-time high or more can be split into two factors – its current position factored with the Momentum Reversal Indicator (MRI) and the supply on exchanges.

From a technical perspective, the Chainlink price is currently hovering around the support level at $19.22, the peak of the August 2020 bull run. Therefore, flipping this area into support would provide the oracle token a chance to consolidate and catapult from there to vital resistance levels.

Further helping LINK’s case is the MRI, which has flashed a buy signal in the form of a green ‘one’ candlestick on the 3-day chart. This technical formation forecasts a one-to-four candlestick upswing.

The rally that originates from the buy signal mentioned above might push Chainlink price toward a critical resistance level at $32.85.

Clearing this barrier will allow LINK to surge swiftly to the next ceiling at $43.48 due to price inefficiency seen during the May 19 drop.

However, if Chainlink price sets up a daily candlestick close above $43.48, it will put the all-time high at $52.9 in an attainable spot.

In a highly bullish scenario, LINK price could extend the bull run to the 127.2% Fibonacci extension level at $139.35. 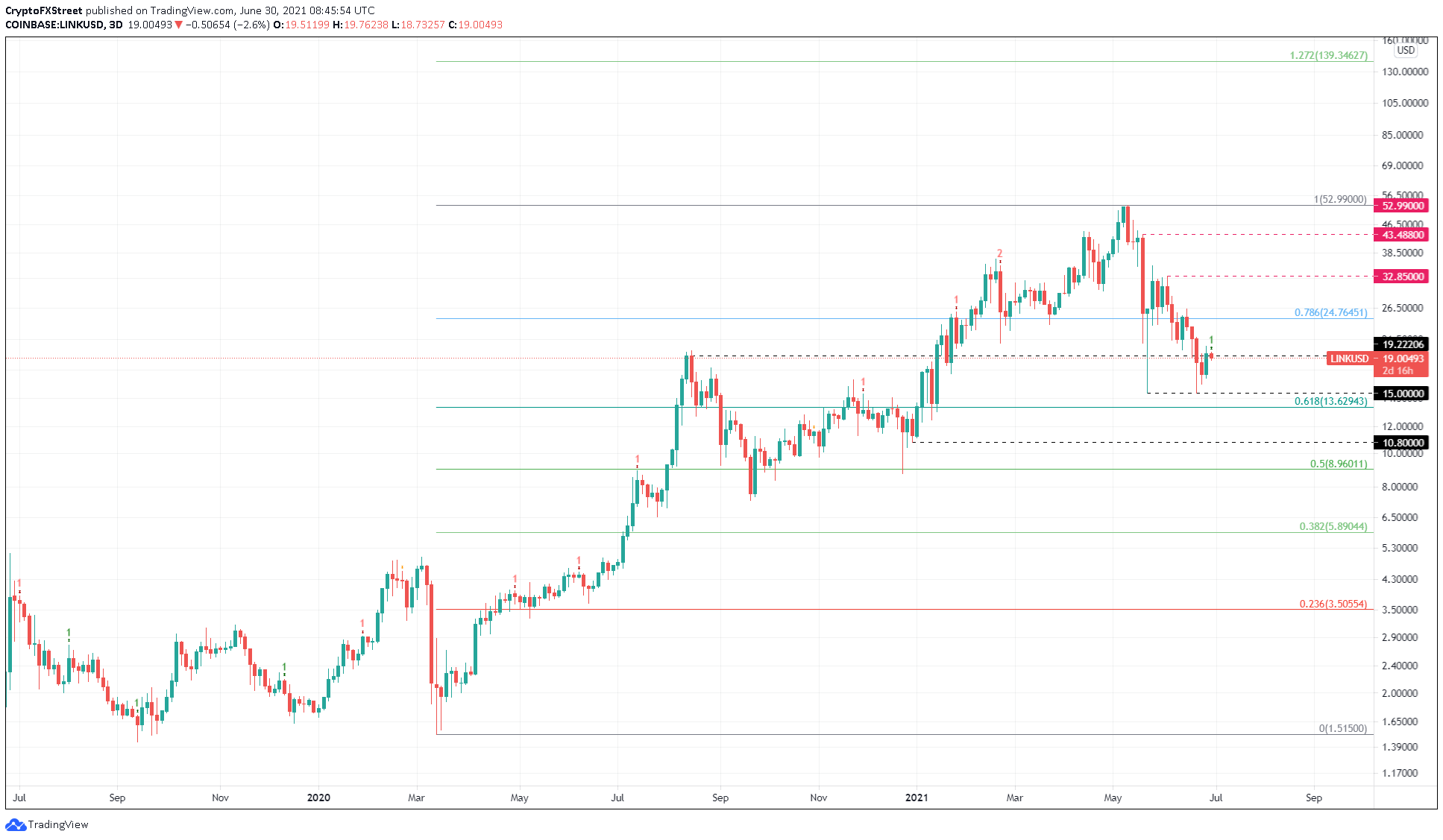 Supporting this massive upswing for Chainlink price is the supply of LINK on exchanges, which has not set up a meaningful higher high since early September 2020. The number of LINK tokens held on centralized entities has dropped from 177.19 million to 143.12 million over the past ten months.

This 19% decline indicates that investors are moving their holdings off exchanges, which suggests that they are confident in LINK price performance in the future.

A similar decline in ETH held on exchanges was observed during the recent bull run, which led to massive gains for users holding Ether. Therefore, if a similar trend were to occur, LINK price would not only tag its all-time high at $52.90 but rise beyond it.

Regardless of the bullish outlook, if Chainlink price breaks down the foothold at $15, the uptrend hypothesis will be delayed. In such a case, LINK might drop 28% to tag the support level at $10.8.

A spike in selling pressure that shatters this barrier will invalidate the bullish thesis and might push the oracle token to the 50% Fibonacci retracement level at $8.96.

Icon (ICX) price has been trading inside a rounded bottom pattern since June 2018. The ICX price action since February 2020 has been a mirror of its prior moves. Going by this logic, the Icon price is currently forming a base that kick-starts the last leg of the fractal, which could quickly push it to the current all-time high at $3.19 and possibly beyond it.

From a mid-to-short term perspective, the Icon price is trading at $0.80, coinciding with a crucial barrier. A decisive daily candlestick close above this level opens up the path for an upswing to the next meaningful resistance ceiling at $2.05.

Supporting this uptrend is the Momentum Reversal Indicator (MRI), which has flashed a buy signal in the form of a red ‘two,’ which indicates the massive bearish descent seen so far and further stresses the need for a bull rally.

A popular analyst on Twitter, who goes by the screen name ‘DaveTheWave’ posted a chart with a similar idea. Based on his analysis, the first target for ICX was $2.669, which was hit in late March.

However, his long-term projections indicate that Icon price might go up to $100.

A breakdown of the rounded bottom pattern might trigger a sell-off and halt the bullish thesis explained above. Such a move could drag Icon price to its immediate support level at $0.60.