Chainlink price has been trying to brave the volatile cryptocurrency market by pushing for gains north of its current market value of $6.30. A symmetrical triangle pattern started forming around mid-July and elevated LINK to $7.50 last week but missed its target at $8.60.

At the time of writing, Chainlink price must hold above $6.20, an area coinciding with the upper trend line of the governing chart pattern. Otherwise, a break to the downside will stretch the leg to $5.35.

Chainlink announced Monday that a Web3 GameFi platform called BetSwirl has adopted the network’s renowned price feeds on several protocols, including Avalanche, Binance Smart Chain and Polygon. The development saw Chainlink price soar to $26 but a correction occurred immediately as investors sold the news. According to a blog post published on the same day, BetSwirl will have “access to high-quality, tamper-proof price feeds needed to help calculate user fees when a bet is wagered.”

“We chose Chainlink as our go-to oracle solution because its infrastructure is seamless to integrate and time-tested in production. Chainlink already helps secure leading DeFi protocols responsible for billions of dollars in smart contract value.” Added BetSwirl. 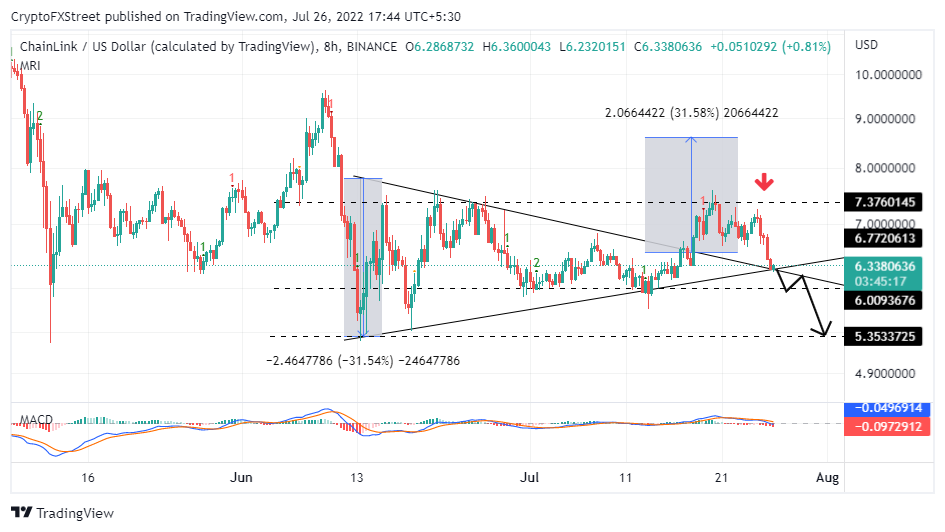 Bulls are likely to be overwhelmed by the ongoing selling pressure, especially when considering the negative outlook of the Moving Average Convergence Divergence (MACD) indicator. A break beneath the triangle pattern, as shown in the chart, will result in more losses to $5.35. This decline will be reinforced as the MACD retreats into the negative region below the mean line.

A recent spike in the weighted sentiment, a metric developed by Santiment, hints at the bearish reversal stretching further before a bullish correction occurs. This on-chain model combines positive and negative mentions on Chainlink and multiples the result with the total social volume. Note that the weighted sentiment is inversely related to price action. In other words, a spike in the index points to an immediate trend reversal and lower prices, thus, confirming the potential move to $5.35.

The In/Out of the Money Around Price (IOMAP) metric reveals an immense supply at $6.88. This zone represents around 9,300 addresses that previously purchased 303 million LINK tokens at this price. As Chainlink price recovers, these holders will likely offload their bags – relieved at having broken even – adding to the overhead pressure.

Support areas are currently weak, meaning the path of least resistance is down. When coupled with macro events in the market like the FOMC decision on Wednesday, these fundamental factors place Chainlink price in a precarious situation. In other words, the predicted drop to $5.35 could be quite conservative.