Tezos price is breaking out from a three-week consolidation process along the 10-week simple moving average (SMA). A clear breach of the topside trend line at $5.37 will break the precedent of a failed breakout in February.

Tezos price not overbought on the long-term charts

Since the beginning of 2021, XTZ has constantly held the 10-week SMA on a closing basis, demonstrating consistent, almost methodological demand for the altcoin.

If the rally continues this week, the first resistance will be the topside trend line at $5.37, followed by the February high at $5.66. Still, traders should set their sights on the 1.382 Fibonacci extension of the February correction at $6.71, delivering a gain of 35% from the current price. An aggressive target is the 1.618 extension level at $7.35. 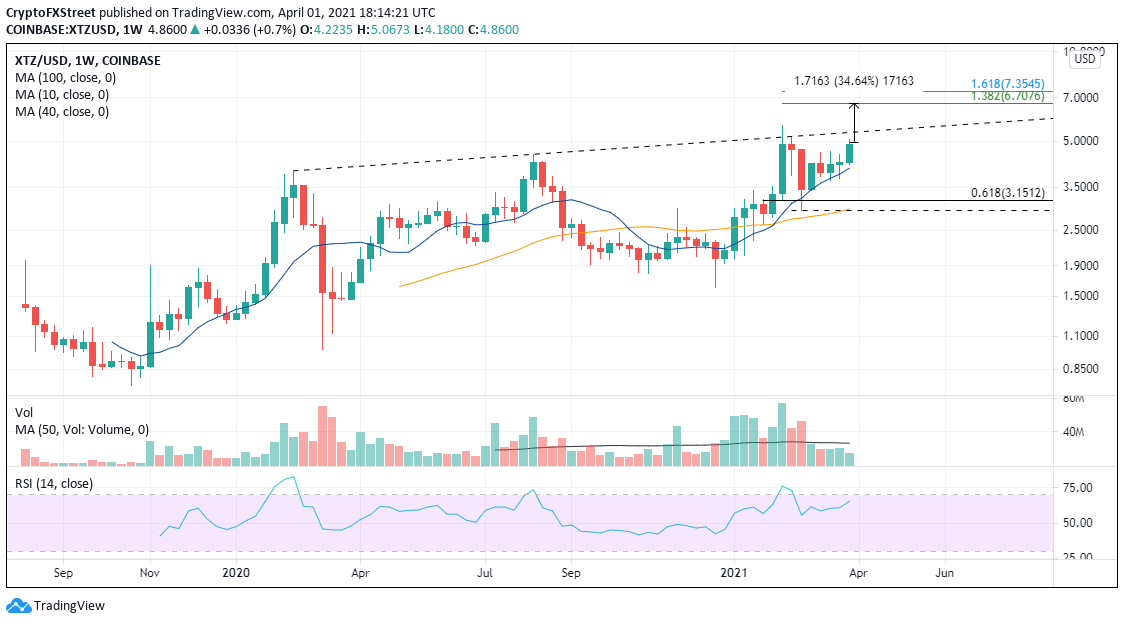 A rejection at the topside trend line on a weekly closing basis would raise the odds that XTZ will revert to the 10-week SMA at $4.06. Subsequent support may appear at the 0.618 Fibonacci retracement of the rally from the December low at $3.15. A more critical foothold is the February low convergence with the 40-week SMA at $2.92-$2.95.

Ethereum price closed well above the MRI's breakout line at $2,345, suggesting a massive bullish momentum in play. Whales are accumulating non-stop, which hints at their interest in ETH at current price levels. A bullish divergence between the number of daily active addresses and exchange deposits reveals a move to $2,500 shortly.

Algorand vies for 85% advance upon the breach of its consolidation

Algorand price is traversing a bullish pennant, hinting at an 85% upswing to $2.83. A decisive close above $1.53 will signal a breach of the pennant’s upper trend line.

Bitcoin’s on-chain data suggest a short-term correction may be needed before Bitcoin could continue its price rally.  Market sentiment toward Bitcoin poses a major concern for the cryptocurrency, indicating it is approaching “peak hype.”