Dogecoin price seems to be driven by Elon Musk. His appearance on "Saturday Night Live" disappointed investors, leading to a sell-off. Now, Musk could ditch Bitcoin and allow Tesla and SpaceX to accept payments in DOGE instead.

Elon Musk has been pumping and dumping DOGE prices for over the past few months. Indeed, his recent appearance on "Saturday Night Live" served as a "sell the news" even for many investors. Dogecoin dropped by almost 50% since then to hit a low of $0.38.

The top cryptocurrencies by market capitalization also experienced a steep correction after Musk announced on Twitter that Tesla would no longer accept Bitcoin as payment for its vehicles. The billionaire entrepreneur cited effects on the environment due to fossil fuels for BTC mining and transactions.

Even though Tesla has ditched Bitcoin as payment, it is also not looking to sell any BTC on its balance sheet. It only plans to use the leading cryptocurrency as a medium of exchange once mining transitions to more sustainable energy. Musk said:

We are also looking at other cryptocurrencies that use less than 1% of Bitcoin/s energy/transaction.

Interestingly enough, Musk posted a poll on Twitter asking his audience whether or not Tesla should accept Dogecoin as a form of payment. The move coincides with SpaceX's decision to enable DOGE payments for a mission to the moon in 2022.

Elon asks the community whether DOGE (proof of work coin, secured by energy) should be accepted by Tesla, and in the very next tweet announces Tesla is no longer accepting BTC due to energy reasons. Tell us what's really going on.

Dogecoin price on the spotlight

Speculation mounts around Dogecoin since Tesla could soon accept this cryptocurrency as a form of payment instead of Bitcoin. While the news may be bullish, DOGE price seems to be trading within a descending parallel channel on its 4-hour chart.

Dogecoin price must hold above the channel's lower boundary and the 200 four-hour moving average at $0.35 to keep speculators optimistic. 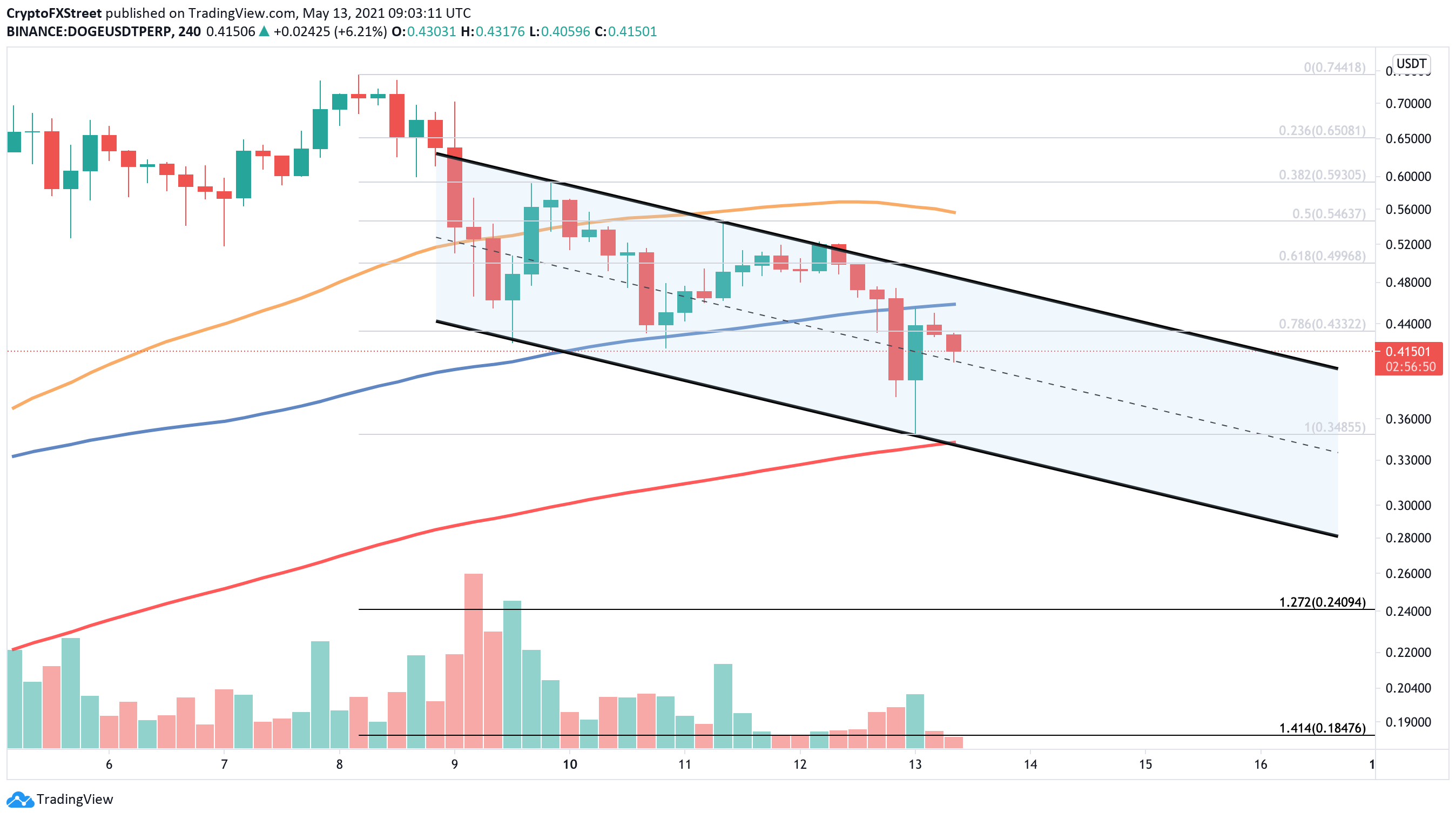 On the flip side, slicing through the channel's upper boundary and the 100 four-hour moving average at $0.47 may signify that Dogecoin price is poised to recover.

If DOGE manages to regain $0.47 as support, it would have to break through the 50 four-hour moving average at $0.56 to be able to march toward new all-time highs. It seems like the bullish scenario would depend on whether or not Tesla decides to accept Dogecoin as payment for its products.