Payment firm Square witnessed $1.8 billion in Bitcoin revenue in Q3 2021, representing a significant decline in QoQ revenue. However, the company’s BTC revenue has seen an increase of 11% YoY.

In its latest quarterly earnings report, Square noted that its Bitcoin revenue reached $1.8 billion, with $42 million in gross profits. These figures represented an increase in BTC revenue of 11% YoY and a jump of 29% in the leading cryptocurrency’s gross profits YoY.

The payment firm stated that the decline was due to market conditions, primarily by the relative stability in Bitcoin price that affected trading activity compared to the previous quarters. BTC investors were mostly interested in buying the dip, and trading activity waned when the flagship digital asset’s price stabilized.

Despite the decline in Bitcoin trading activity, BTC revenue made up for nearly half of Square’s total revenue. The company saw a total of $3.84 billion in revenue this year, and the leading cryptocurrency was responsible for 46%.

The payment company also highlighted that Bitcoin revenue and gross profit may fluctuate in the future quarters as customer demand may shift depending on the Bitcoin market price.

The firm continues to focus on Bitcoin and does not have any plans so far on offering users access to other cryptocurrencies. Square stated that its focus was on building its hardware wallet and allowing individuals and companies to mine BTC.

Bitcoin price needs to slice above $63,700 to resume rally

Bitcoin price is consolidating within a parallel channel following its all-time high on October 20. The leading cryptocurrency may continue to move sideways until it is able to slice above the upper boundary of the prevailing chart pattern at $63,695.

The flagship digital asset will discover meaningful support at the 21 and 50 twelve-hour Simple Moving Averages (SMAs), coinciding with the 78.6% Fibonacci retracement level at $61,151 as its first line of defense. 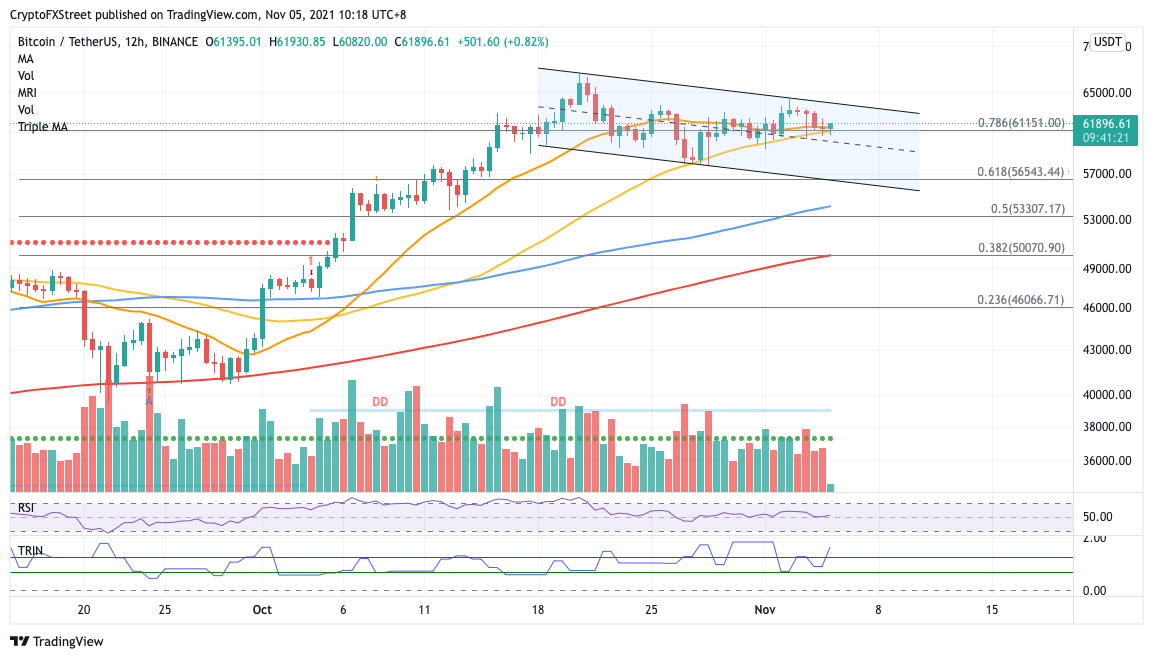