Square is prepared for fluctuations in Bitcoin price

Square’s Cash App service witnessed its Bitcoin Q2 revenue climb from $2.72 billion to $875 million in its second-quarter financial letter to shareholders. The gross profit of the leading cryptocurrency increased from $17 million to $55 million.

As the price and demand for Bitcoin increased, Square stated that the firm’s crypto revenue and gross profit benefited from the growth in customer demand. The company added that those engaged with products like the leading digital currency had generated more profit per customer.

The payments firm expects to see fluctuations in Bitcoin revenue and gross profit in future quarters due to the changes in the price of the bellwether cryptocurrency and customer demand.

Square recognized a Bitcoin impairment loss of $45 million on its investment in the leading cryptocurrency. The California-headquartered firm purchased $170 million worth of Bitcoin in Q1 this year, adding to its Q4 2020 purchase of 4,709 BTC.

The financial services company is committed to investing in the leading digital asset, similar to electric vehicle maker Tesla, which reported a $23 million impairment from Bitcoin in its Q2 presentation.

Despite the drop in Bitcoin price, Square and Tesla continue to hold the top crypto asset.

Bitcoin price pulls back before revealing next ambitions

Bitcoin price has recorded an incredible rally of nearly 50% since July 20. While BTC surged above $40,000 for the first time since June 16, the leading cryptocurrency quickly flashed an overbought signal before starting its pullback.

The bellwether cryptocurrency is holding onto the 38.2% Fibonacci extension level and the 100-day Simple Moving Average (SMA) at $39,608 as critical support. Should Bitcoin price be able to stay above this line of defense, BTC is likely to move sideways before presenting a clear indication of its intentions. 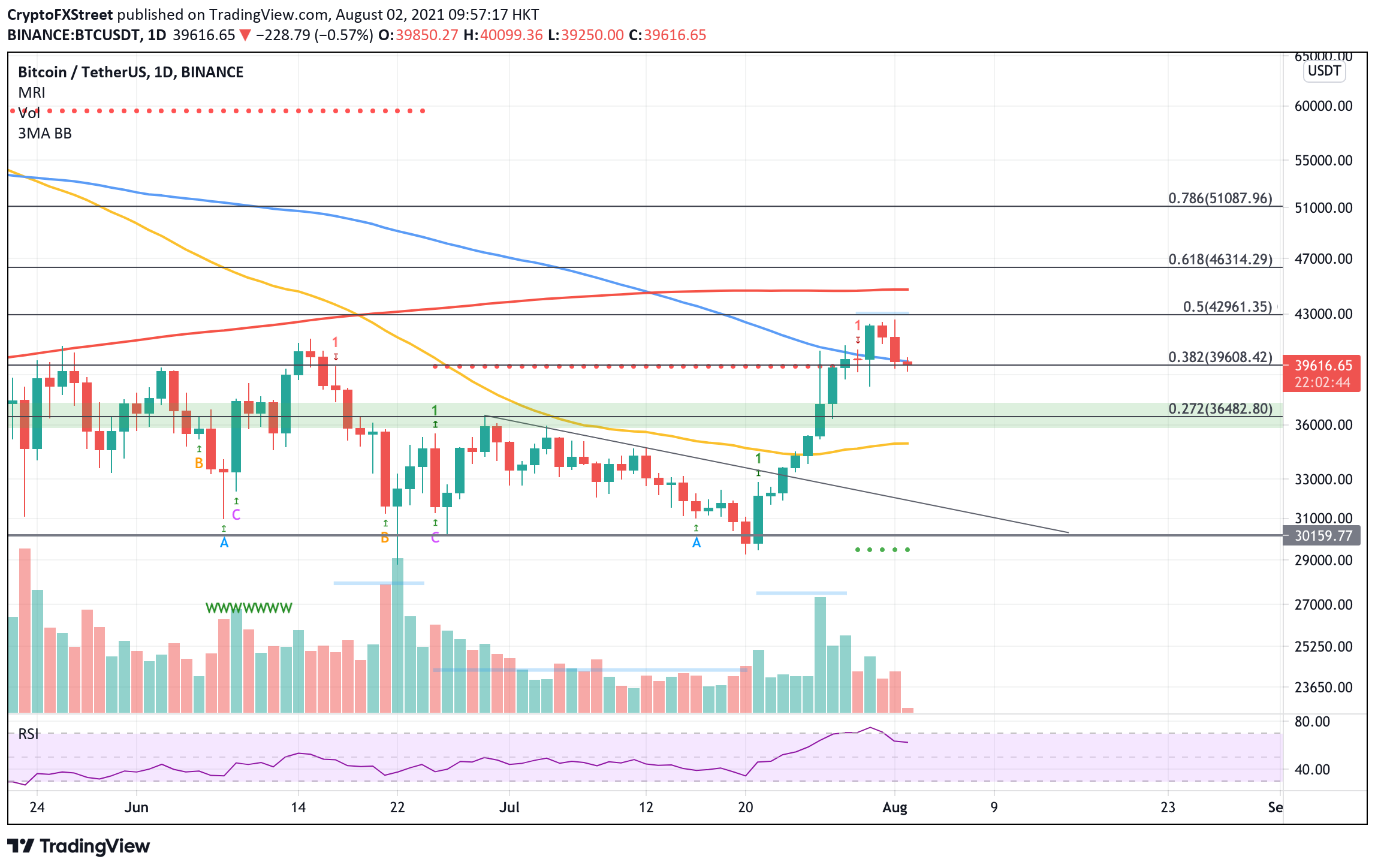 However, if selling pressure kicks in for the leading cryptocurrency, Bitcoin price may see a retest of the 27.2% Fibonacci extension level as meaningful support at $36,482, which falls within the demand zone that reaches from $35,777 to $37,253.

On the flip side, it will take compelling upside release for Bitcoin price to target higher levels, as the bulls are confronted by several technical obstacles, including the 50% Fibonacci extension level at $42,961 and the 200-day SMA at $44,686.