Bitcoin price has been consolidating for more than ten days and shows no signs of a directional bias. BTC collected liquidity and could be primed for a move lower. For now, the altcoins are showing strength as BTC coils up. If BTC crashes, altcoins are bound to take a hit.

Bitcoin price on the fence as bulls fight bears

Bitcoin price rose 8% between November 1 and November 2 and pierced into the liquidity zone, ranging from $62,614 to $63,699. While it closed above it on a four-hour time frame, the daily candlestick did not. This indecision suggests the inability of the buyers to push through.

Therefore, investors can expect BTC to head lower, to the immediate support level at $60,000. A daily close below this level will suggest that the downswing will continue. In such a case, the big crypto will revisit the demand zone ranging from $56,629 to $58,587.

This barrier will be crucial in determining the directional bias, a breakdown of which will reveal that BTC is headed to $53,000. This move would be a perfect buy opportunity for patient and long-term investors. 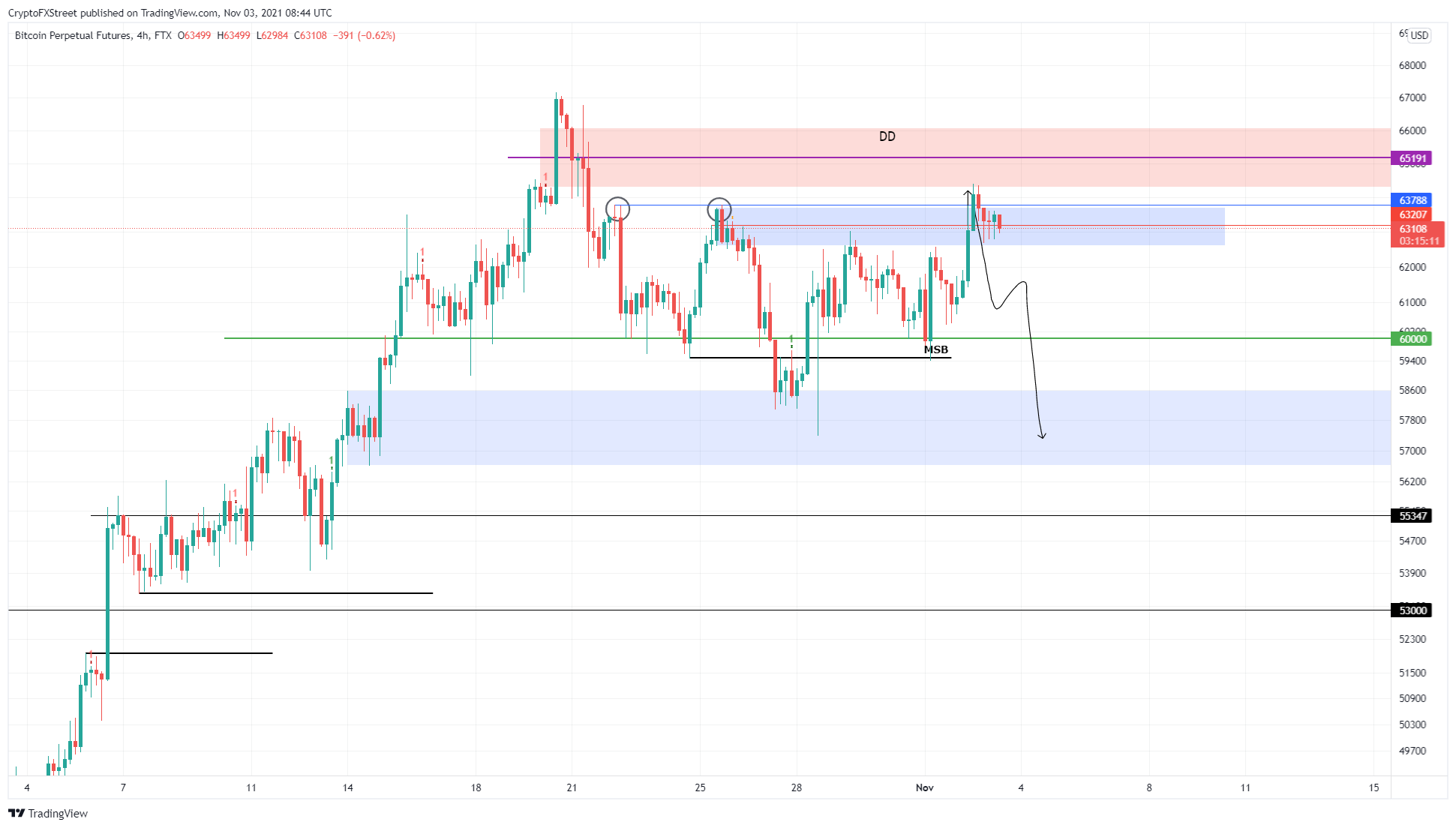 Bullish confirmation would come from a retest of the same level. In such a case, BTC will head toward the $70,000 psychological level.

Unlike Bitcoin, Ethereum price set up a new high at $4,643 and is currently hovering in this region. The 100% trend-based Fibonacci extension level at roughly $5,000 is a few ticks away; therefore, investors could expect ETH to retest this barrier in the coming future, especially if BTC continues to consolidate. In a highly bullish case, the ascent could extend beyond this barrier due to its deflationary nature after the recent network upgrades.

Over the past week, the number of ETH being minted by miners are less compared to the ones being burned after the EIP-1559 upgrade. Add that to the recently approved CME's Micro Futures, Ether's future looks extremely bullsih. 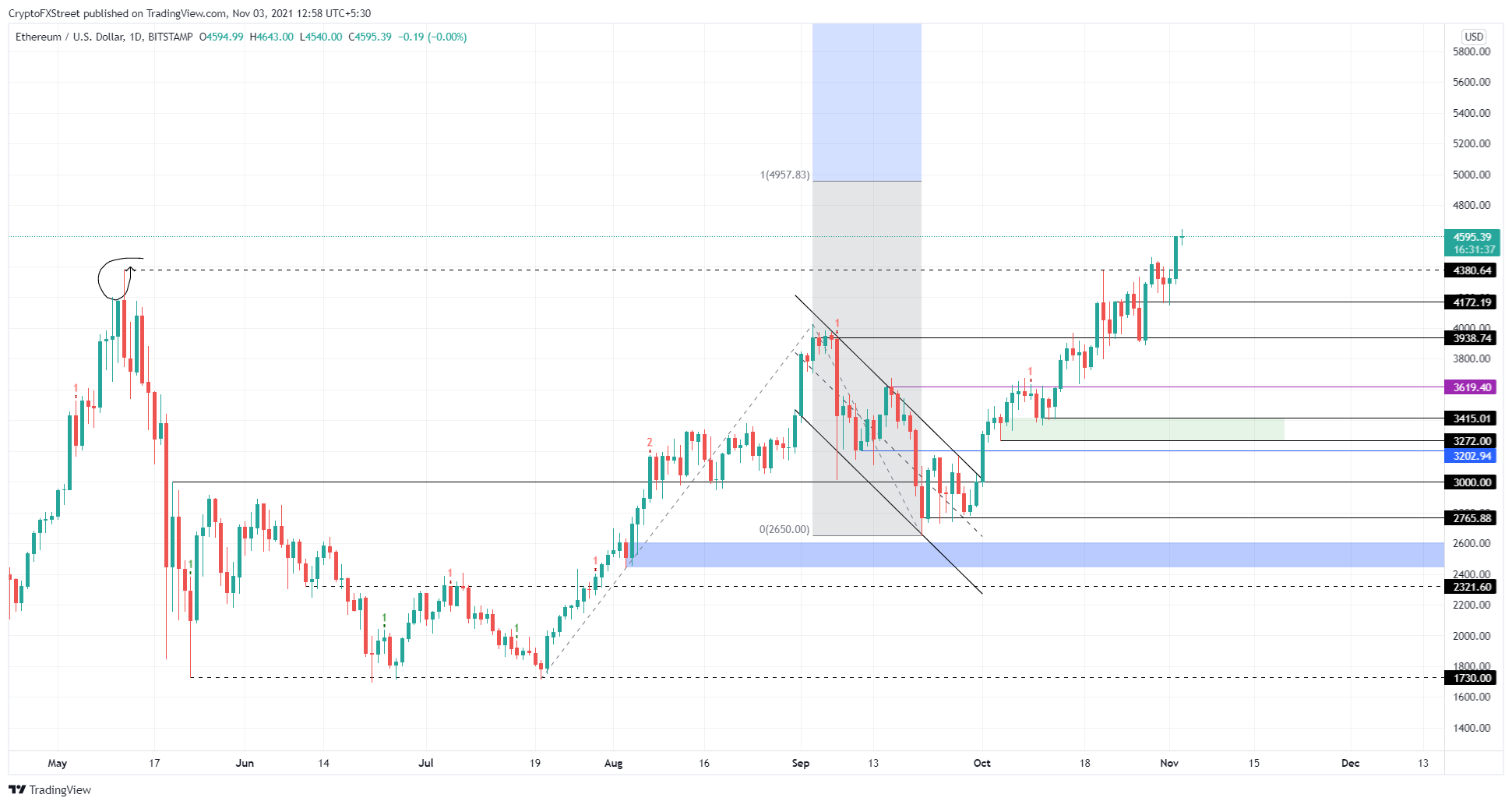 As bullish as that is, the outlook is contingent on the assumption that BTC does not violently crash to $53,000 or lower. If it does, Ethereum price will likely revisit the $3,619 barrier, followed by a crucial support floor at $3,200. Investors can expect ETH to make a comeback around this area.

Ripple price has set up multiple lower highs and higher lows since August 10, which, when connected using trend lines, result in the formation of a symmetrical triangle pattern.

Since its breach on November 2, Ripple price has seen a 9% ascent so far. While this move is bullish, XRP needs to produce a daily close above $1.41 to strongly confirm a move to its intended target at $1.97. 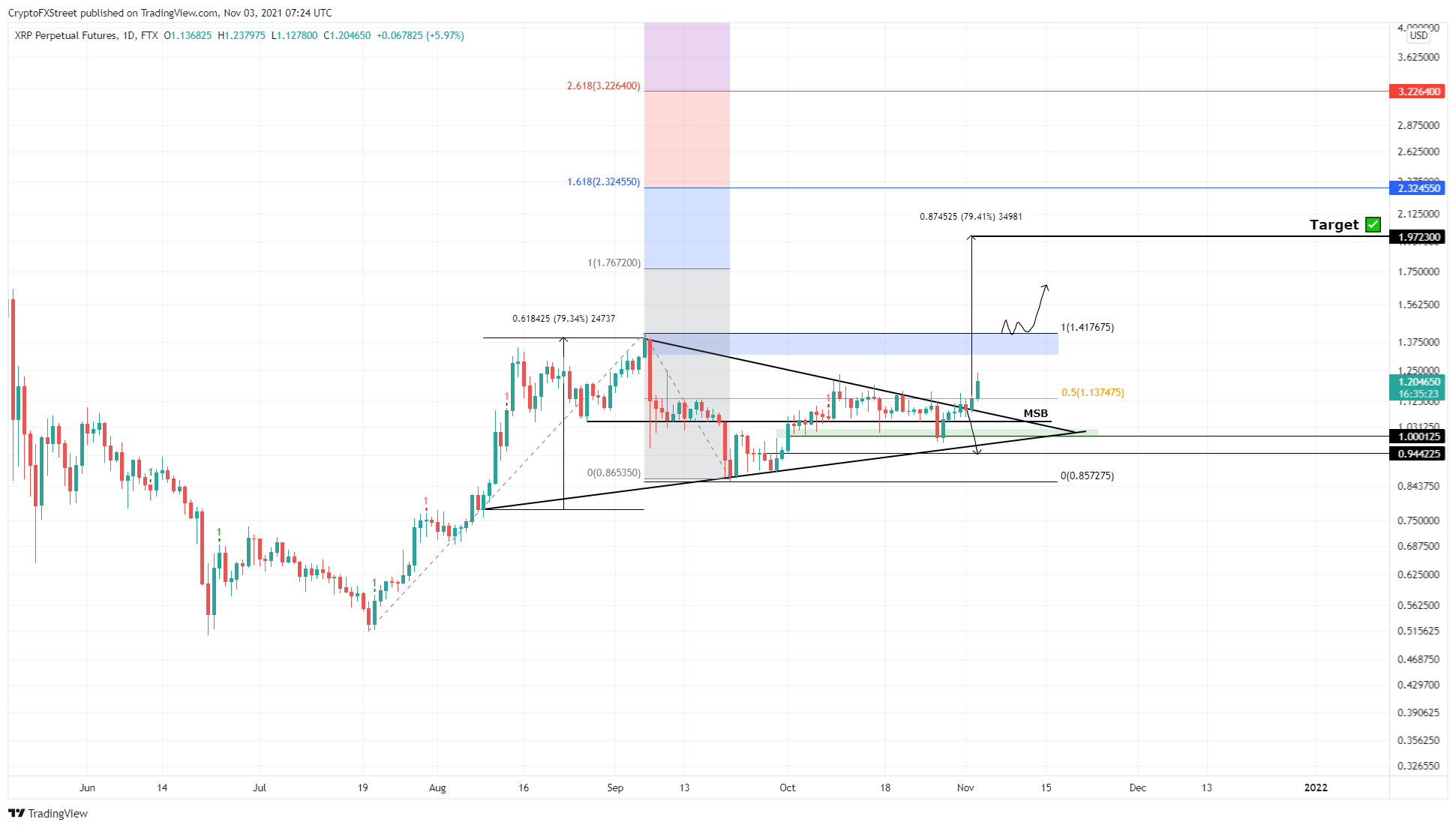 On the other hand, if Ripple price fails to slice through the supply zone, ranging from $1.31 to $1.97, it will indicate weakness among buyers. If the XRP price slides back into the technical formation, it will invalidate the bullish thesis and retest the $1 psychological level.