Tesla’s quarterly announcement revealed that the firm had not sold any more Bitcoin despite Elon Musk’s concern about the leading cryptocurrency’s environmental impact.

The electric vehicle (EV) maker did not report any new sales or purchases of digital currencies in its Q2 presentation and continues to hold $1.3 billion in Bitcoin.

Although Tesla’s quarterly earnings revealed a record $1 billion in profit while producing over 200,000 vehicles, its Bitcoin holdings have depleted in value since its purchase earlier this year.

In February, the EV maker announced that it had purchased $1.5 billion in Bitcoin, which quickly surged in value a month later, worth $2.48 billion at the time.

Later in the quarter, Tesla sold 10% of its BTC holdings, looking to prove to the world that there is enough liquidity in the market, according to Musk. The small portion of Bitcoin sales boosted Tesla’s earnings in Q1 by $272 million.

This quarter, Tesla reported a $23 million impairment on its Bitcoin holdings, calculated by the lowest value BTC recorded in the period, around $28,000 under Generally Accepted Accounting Principles (GAAP).

However, the plunge in Bitcoin price should not affect the company’s earnings as long as Tesla did not sell any more of its holdings. Under the accounting rules, companies would not need to recognize a profit if BTC rises, but a loss would be recorded if the asset’s price slides.

Elon Musk’s vehicle company announced that it would no longer accept the leading cryptocurrency for the sales of its vehicles in May due to the environmental concerns over the use of coal and fossil fuels for mining.

Musk stated earlier this month that mining is becoming more environmentally friendly and that Tesla could soon resume accepting BTC as payment.

Bitcoin price is retracing after a spike in buying pressure, which pushed BTC to above $40,000 for the first time since June.

Although the governing technical pattern suggests that BTC still has room for its upside potential, Bitcoin price was stopped short at the 200 twelve-hour Simple Moving Average (SMA) just below $40,680, which acted as stiff resistance. 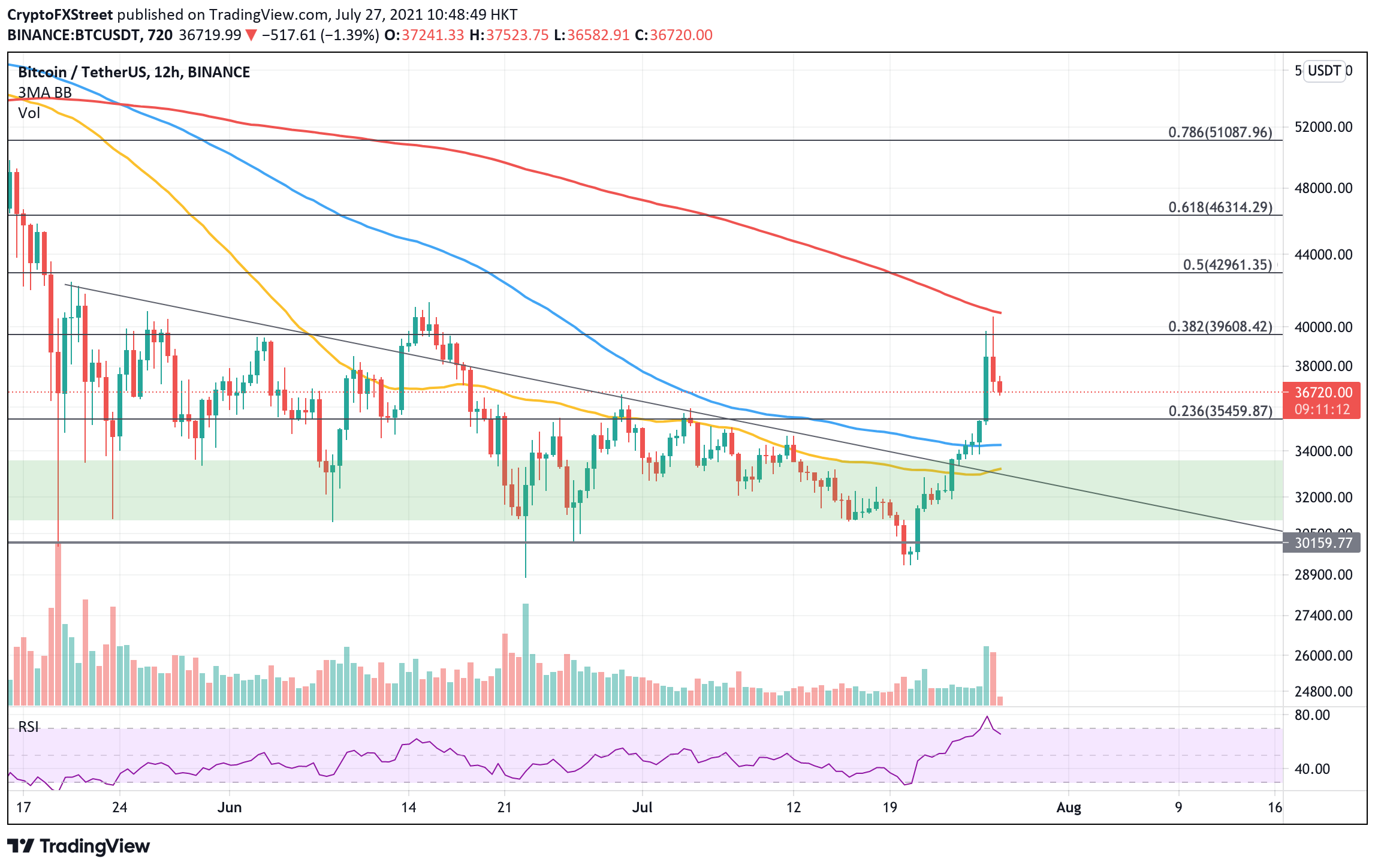 It appears that Bitcoin price was unable to close above the 38.2% Fibonacci extension level at $39,608, which opened up the possibility of BTC searching for support.