Shiba Inu price had been locked in a frustrating consolidation before the brief sweep below the May 19 low on June 11, clearing the weak holders and pockets of anxiety. The rebound gained traction on the Coinbase announcement, but SHIB met important resistance drawn by two key technical levels that could keep the enthusiasm from the news contained for a few days.

In a surprise announcement posted on the company blog, Coinbase announced yesterday that it was adding SHIB to its Coinbase Pro offering and made effective immediately the transfer of users’ SHIB holdings into their accounts. The one caveat was it would not be available to New York residents.

Official trading will commence on or after 9am Pacific Time (PT) Thursday, June 17, if liquidity considerations are met. SHIB will not be available on Coinbase.com or via the Consumer mobile apps. Coinbase said it would alert clients when support has been added.

The decision to add SHIB so soon after the coin’s creation is a marked contrast with the eventual listing of Dogecoin. It reflects a significant change in the exchange approach, one that was first articulated with the addition of Dogecoin on June 1. It is a revision that arrived a month and a half after Coinbase went public.

Shiba Inu is a token that aspires to be an Ethereum-based alternative to Dogecoin, the popular memecoin. SHIB is intentionally abundant with a circulating supply of one quadrillion. The Shiba Inu token ecosystem supports projects such as an NFT art incubator and the recently reported decentralized exchange called ShibaSwap.

In a matter of days, Shiba Inu price tests the May 19 low, shatters a descending channel, overcomes notable resistance at $0.00000770, briefly overcomes the apex of a multi-week symmetrical triangle at $0.00000888 and tags the 200 four-hour moving average at $0.00000978. From the June 11 low to the June 15 high, SHIB climbed approximately 80%, shaking off the skepticism dictated by the previous bearish price structure.

Moving forward, SHIB investors should anticipate further consolidation along the apex and the anchored volume-weighted average price (anchored VWAP) at $0.00000896 with downward pressuring coming from the 200 four-hour moving average.

Once the price compression is released, as indicated by the extreme overbought condition for the four-hour Relative Strength Index (RSI), and momentum can be reclaimed, Shiba Inu price should not find resistance until $0.00001048, generating a 20% gain from the current price. Additional resistance for SHIB includes the confluence of the May 24 high of $0.00001204 with the May 20 high of $0.00001214.

Another compelling development is the return of heavy volume. It lends credibility and reinforcement against any retracement. 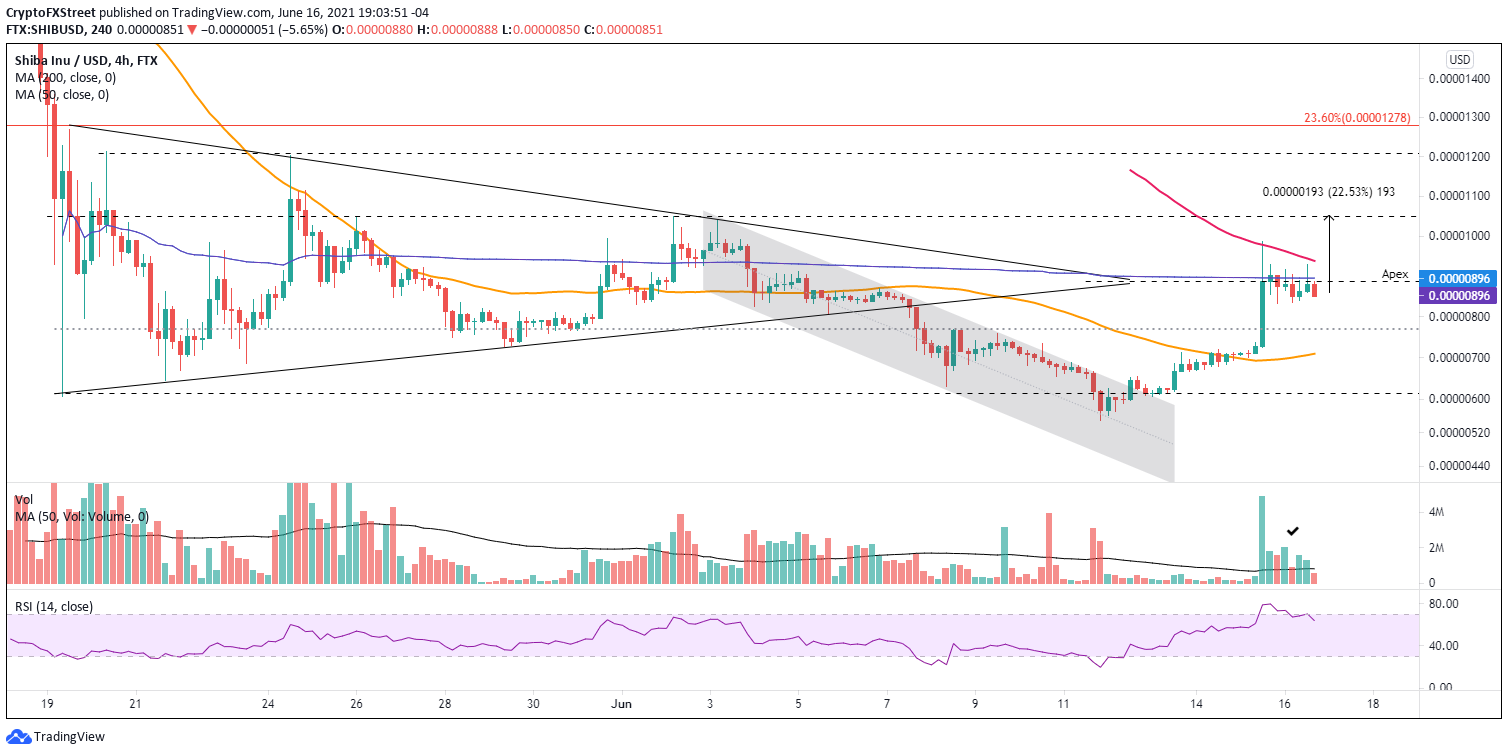 As long as Shiba Inu price remains above $0.00000770, SHIB investors should be focused on the upside potential for the rookie cryptocurrency. However, if Shiba Inu price does register a close below the price level, this rebound will have been a one-hit-wonder.

SHIB investors are primed as one of the largest cryptocurrency exchanges will be listing the altcoin to trade, and they have reason to be excited. According to Messari, a cryptocurrency analysis firm, there is a Coinbase price pop phenomenon during the first five days of trading. Of course, not all cryptocurrencies rally, but the firm has shown that “Coinbase listings have the highest average return at 91%” compared to other digital-market venues over the first five days.

Shiba Inu price is not free from technical restrictions or the weight of the cryptocurrency market that has dominated for weeks. Still, the Coinbase listing may create the exposure necessary to sustain a deliberate rally in the months ahead.

In the following video, FXStreet’s analysts evaluate where Shiba Inu price could be heading next as it triggers a buy signal.