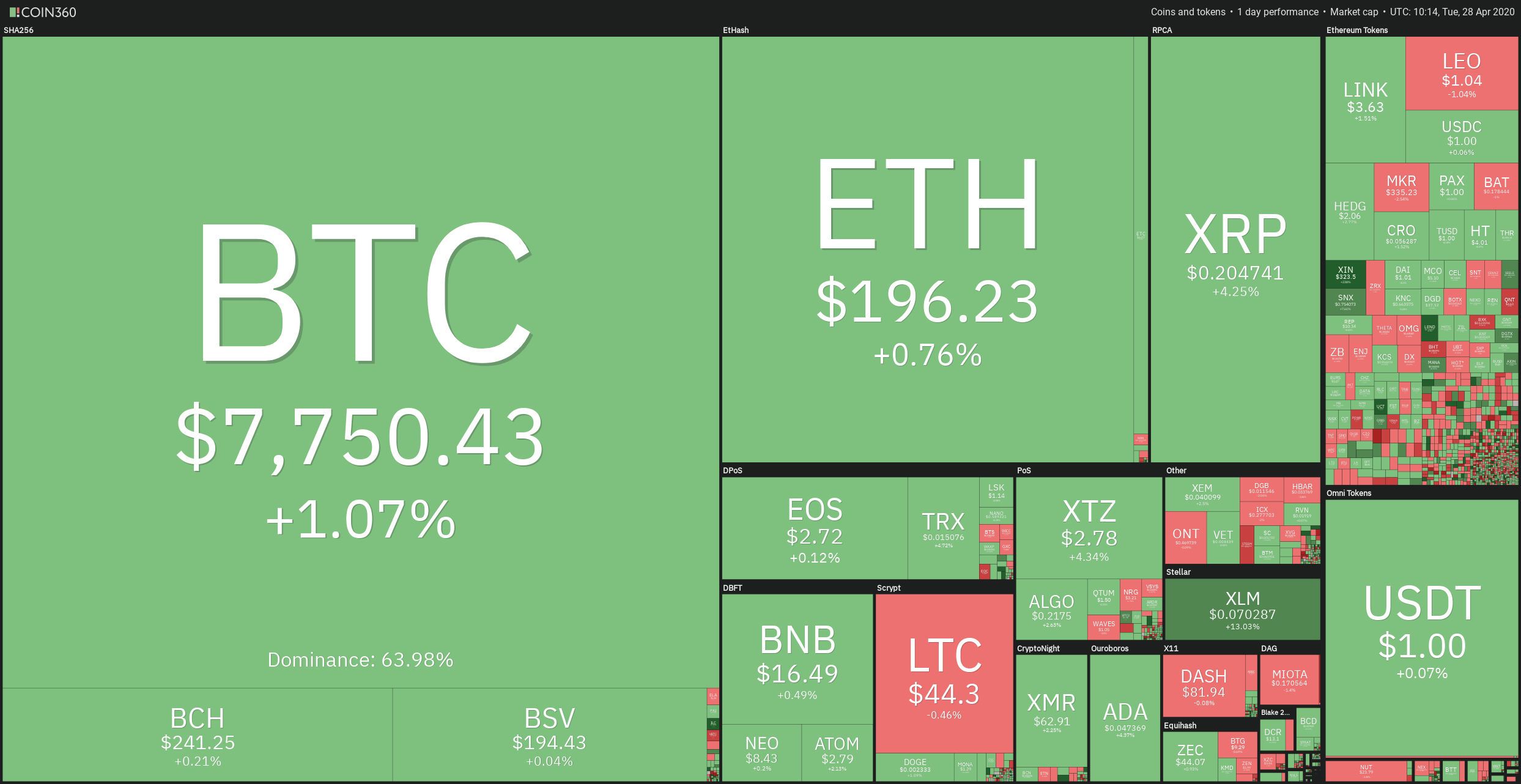 The total market cap daily chart shows it is currently $220.01 billion worth, and we see it moves in an ascending wedge that touches a resistance region that marked the beginning of the bit crash made in March.   The prices are making small bodies lately. Thus, it may signal a top, at least short-term. The 24H volume has decreased to $36.190 billion (-2.,74%), and Bitcoin dominance descended slightly to 63-98 percent. 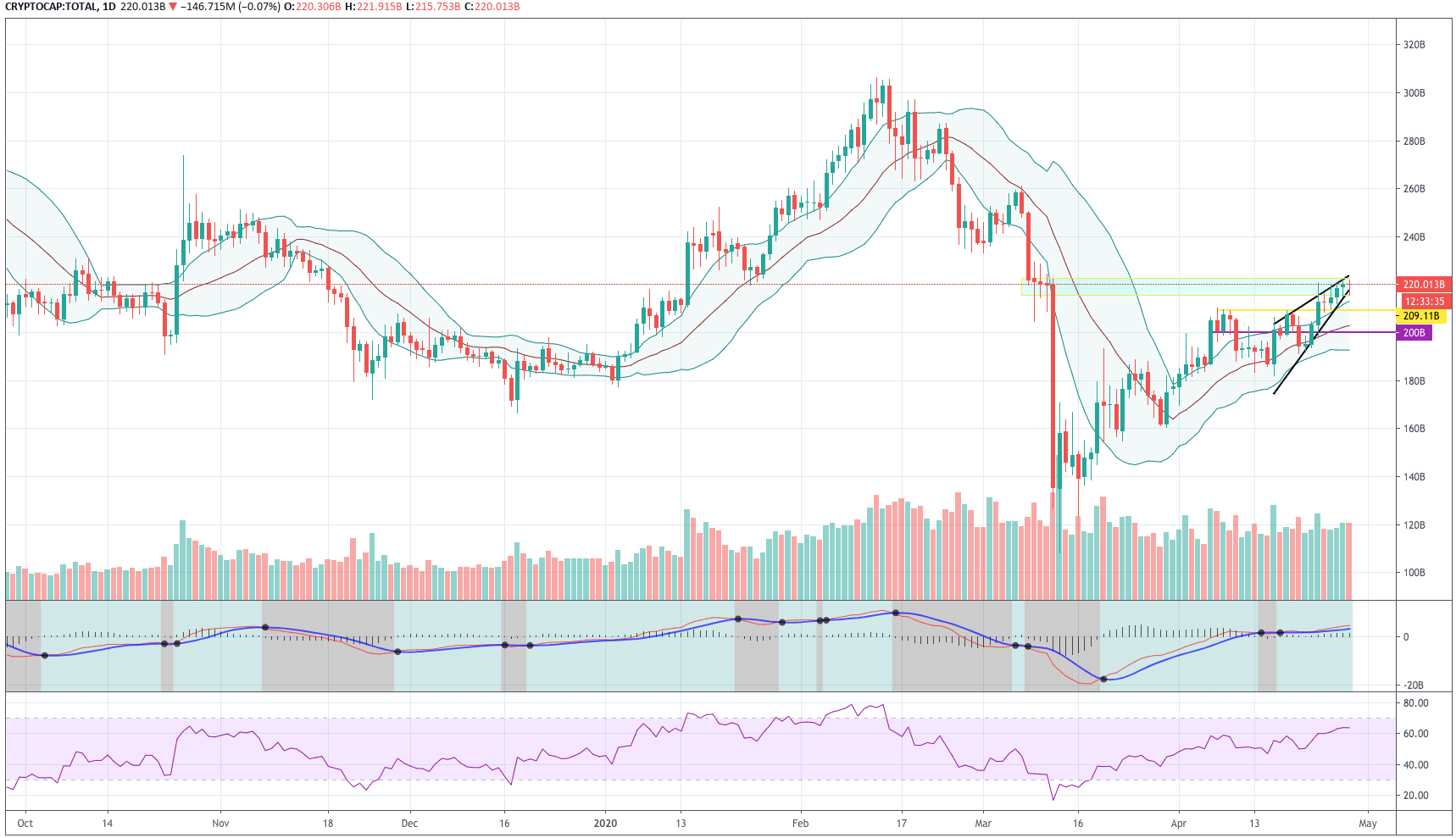 The Bank of China added six more cities to its fintech innovation pilot. The bank has plans to test pilot projects in Shanghai, Shenzhen, Chongqing, Hebei, Hangzhou, and Suzhou. The bank states that fintech following regulations will protect consumer rights.

China has approved 224 new blockchain projects from major brands. Corporations such as Alibaba, China Mobile, and Walmart China are among the names that had requested approvals. Fifty-three of them are Fintech blockchain projects.

The World Economic Forum has published a report in which it advocates decentralized ledger technologies as a useful tool to help restart the economy. The report cites the supply chain on pharma, medical supplies, and food among the sectors in which the efficiency of the supply chain relies on transparency, suggesting the adoption of DLTs to create the needed transparency among stakeholders.

To help businesses and governments in deploying DLT solutions, the Swiss-based World Economic Forum delivered its "Redesigning Trust: Blockchain Deployment Toolkit."  More than 100 public and private groups from over 50 countries were contributors to the toolkit. 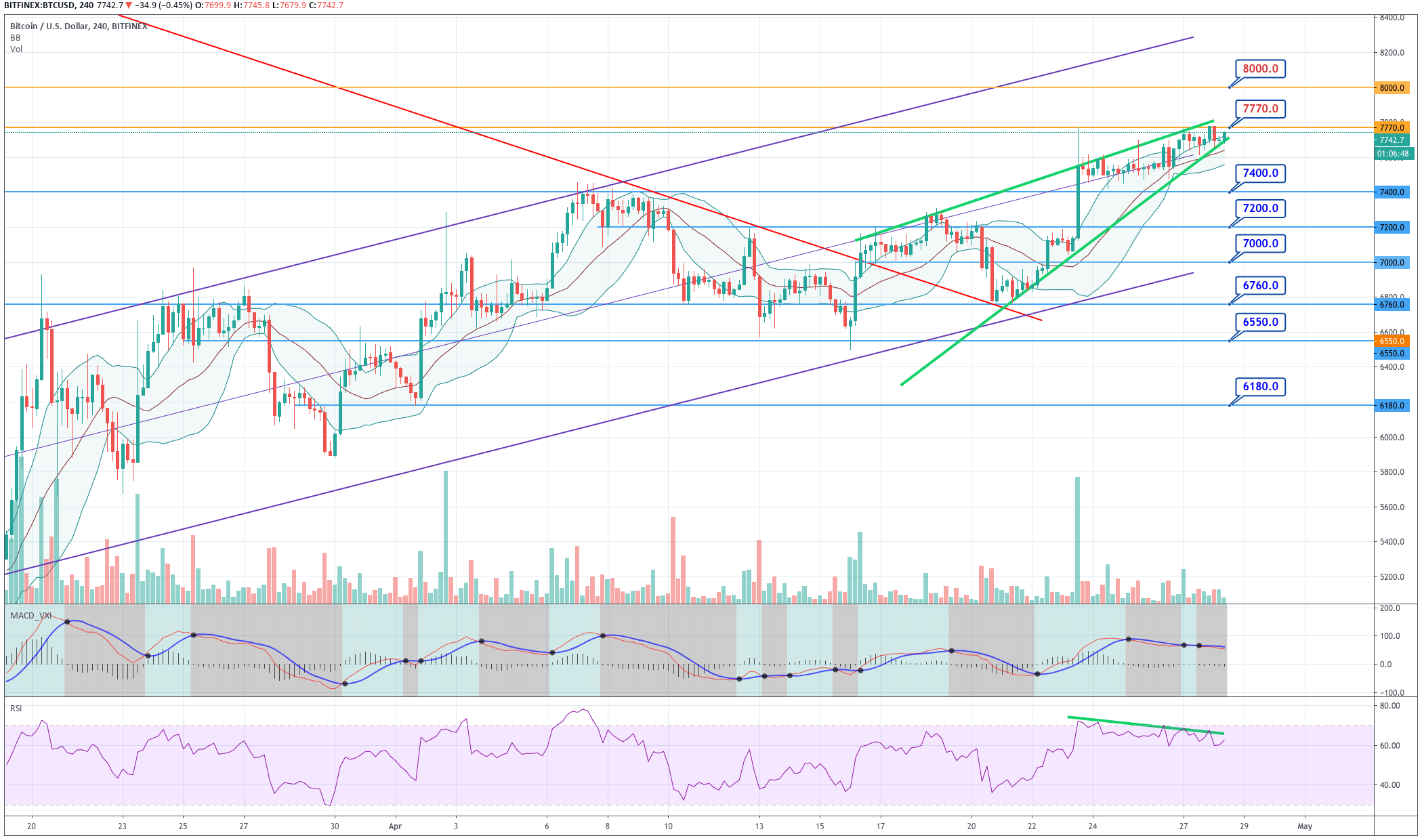 Bitcoin has not changed much in the last 24 hours. It is still moving inside an ascending wedge making higher highs but constrained below the $7,770 level.  The MACD is still bearish, and the RSI is falling and making a bearish divergence. Thus, traders should wait for the resolution to this pattern. The bias is bullish, and only the divergence and the wedge warn of a possible top. Aggressive traders may buy on retracements while expecting the $7,770 breakout, whereas cautious traders should wait for a breakout of that level. 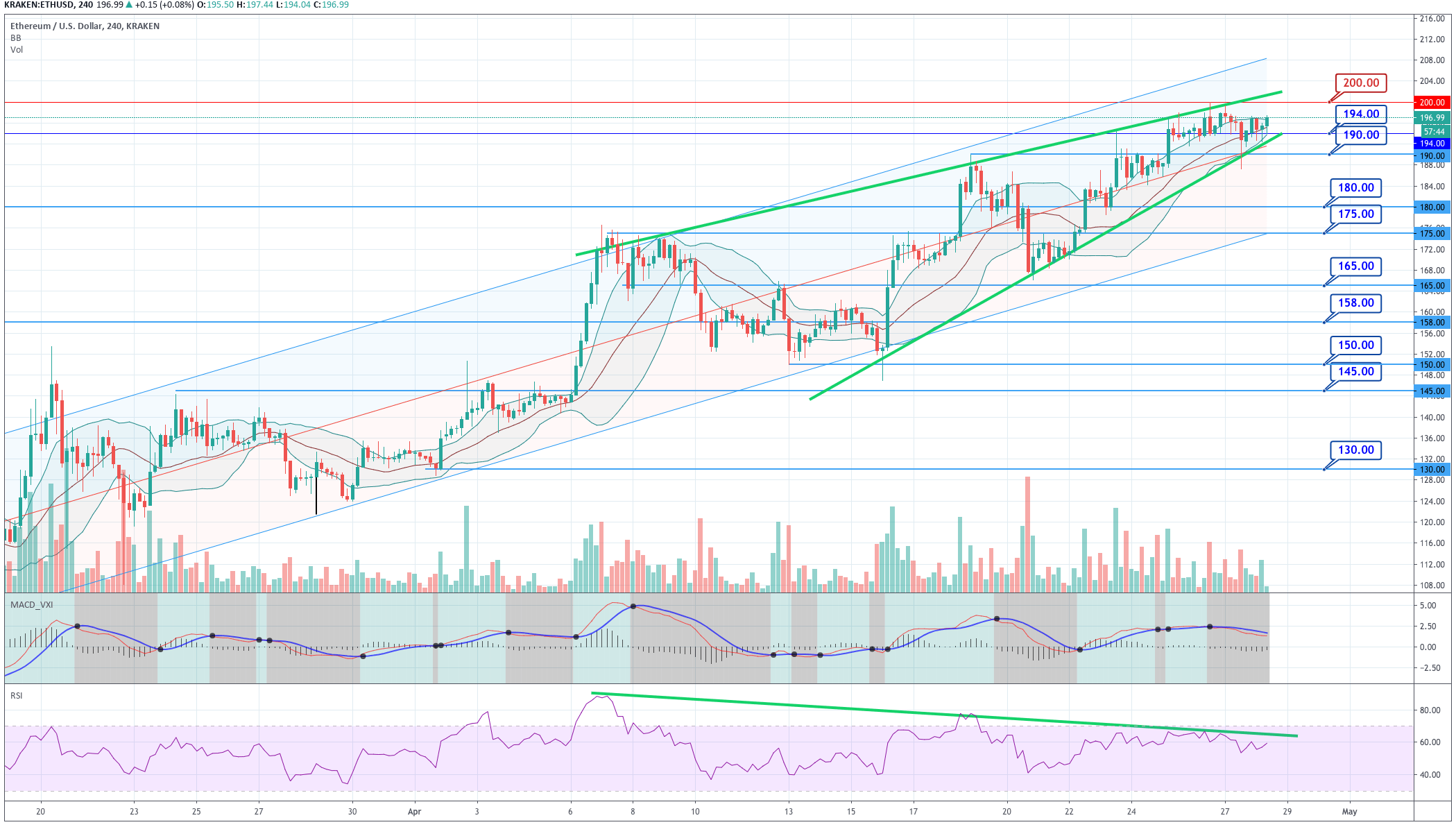 On Monday, Ethereum sellers managed to drive its price momentarily below $190, but soon buyers came in and moved it above that level. Now the price is still moving near the +1SD line, although the Bollinger bands are shrinking, meaning it may be entering in a ranging pattern.  The MACD and RSI moving south may confirm it.  We see  ETH is having trouble with the $200 resistance, but also we can see strength in the buyers as the last candles show good buying volume.

The overall trend is positive, as seen by the linear regression channel, and the price is not overbought. Thus Ether may be preparing the final assault fo the $200 range. 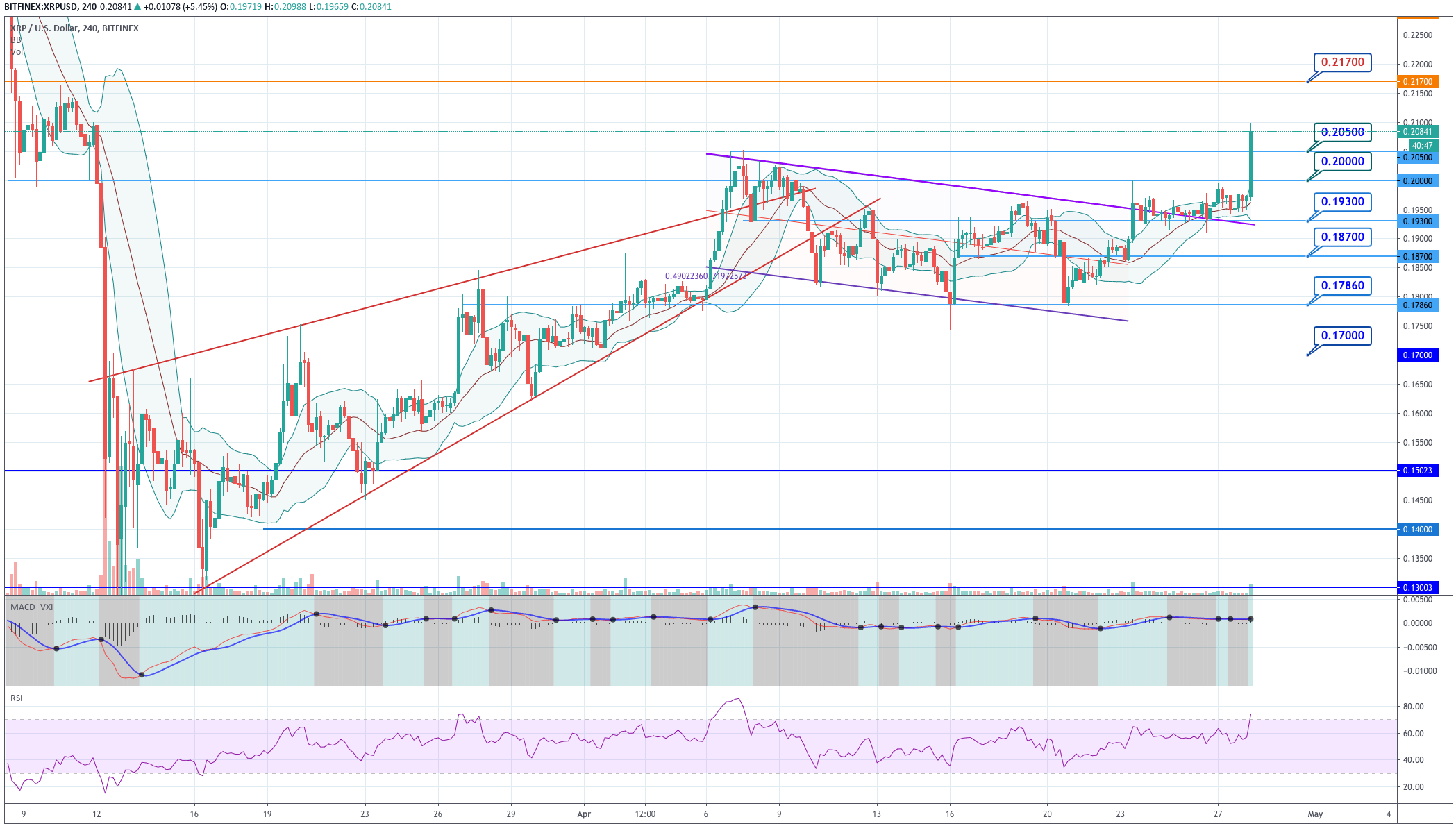 Ripple has left the market behind and made a large 5% candle that broke through $0.20 and $0.205, creating a new higher high above its recent top made on April 07.  This movement went on strong volume, and it moved its price directly into the overbought territory. Thus, Buyers should wait for a consolidation and break of the $0.21 level.