Ether, the second largest cryptocurrency by market capitalization, was in the spotlight on Thursday as the latest hard fork upgrade, which wasa dubbed “London,” officially activated on the Ethereum blockchain network. The upgrade contributed to bullish price action as ether rose about 5% over the past 24 hours, compared with a 3% rise in bitcoin during the same period.

Despite ETH’s rally, some analysts expect widespread institutional adoption to take a few years. Institutional interest boosted bitcoin’s investment appeal over the past year, which contributed to a crypto rally during the fourth quarter of 2020.

“I think Ethereum might flip the bitcoin market cap in the long term, but not this year,” CryptoQuant CEO Ki Young Ju, said in an interview with WuBlockchain.

“I met Goldman Sachs, Fidelity and other big institutional asset management firms in Miami a few weeks ago and they said they’re still struggling explaining what Ethereum/DeFi (decentralized finance) is to their bosses,” Ju said.

Meanwhile, some institutions remain active across the crypto market either directly or indirectly. On July 22, Fidelity Investments acquired a 7.4% stake in crypto miner Marathon Digital Holdings for about $20 million.

Also on Thursday, Invesco, a U.S.-based asset manager, filed with the U.S. Securities and Exchange Commission (SEC) to list an ETF with indirect exposure to bitcoin via futures and other investment vehicles.

Large institutions are easing into the crypto market with a bitcoin-first approach. It will likely take some time, however, before investors fully embrace altcoins such as ether as regulatory hurdles must be cleared first.

Ether was initially steady after the London hard fork was activated, but it started rallying about an hour later. As of press time, ether was changing hands at around $2,807, up from about $2,600 right before the changes took effect, CoinDesk 20 data shows.

Many crypto traders are focused on one component of the upgrade, called Ethereum Improvement Proposal (EIP) 1559, which changes the network’s fee structure so that a certain amount of the cryptocurrency’s supply will be “burned,” or removed from circulation. The bet is that the blockchain’s net issuance of new units of the cryptocurrency will slow as a result of the change, ultimately helping to set a floor under the price.

Analysts at Stack Funds and elsewhere have compared the London hard fork and implementation of EIP 1559 to the Bitcoin blockchain’s “halvings” that occur every four years in the sense that major changes in the cryptocurrency’s supply growth are deployed at specific moments in the blockchain’s lifecycle. Some investors believe Bitcoin’s halving events in the past have helped to increase the price of the underlying cryptocurrency.

As of 15:06 UTC, some 585 ETH of fees had been burned, or roughly 43% of the block rewards issued since the Ethereum hard fork took effect at data block No. 12,965,000, according to the website ultrasound.money.

Ether is now above the 100-day moving average for the first time since June. The price rally has cleared a significant technical hurdle, although the price could find some resistance at the $3,000 level.

ETH’s rally has outperformed bitcoin after a few months of consolidation. The ETH/BTC ratio is testing initial resistance at 0.06, but could see further upside as momentum improves.

Similar to stocks, bitcoin is approaching a seasonally weak period, which could encourage buyers to take profits. The table below shows, on average, relatively weak returns in August over an eight-year period. September tends to be the worst month. Buying picks up in October and February.

Seasonal patterns can vary, especially as bitcoin departed from its historical trends when it tumbled in May. 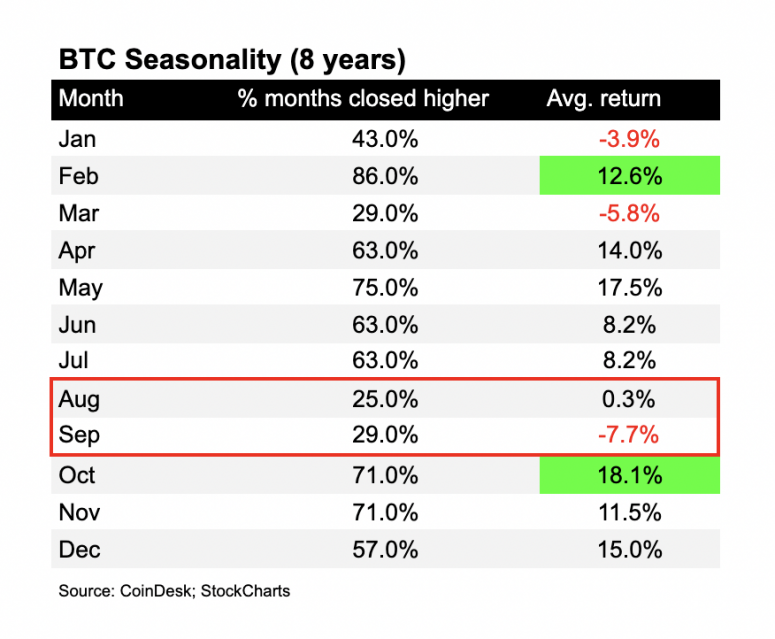 The margin assets for bitcoin futures trading has been shifting from bitcoin to stablecoins, according to Delphi Digital, a research company that focuses on digital assets. The shift has become especially significant as cash margined open interest soared after bitcoin’s price crashed in May.

“The most important implication of this is that longs don’t have the added boost of holding both spot BTC and BTC futures while it goes up, but they’re no longer exposed to deeper losses when their position turns against them (because their margin is in stablecoins, not BTC),” Delphi wrote. “For shorts, they can take advantage of downtrends without their margin value eroding, but they lack protection when BTC moves up.” 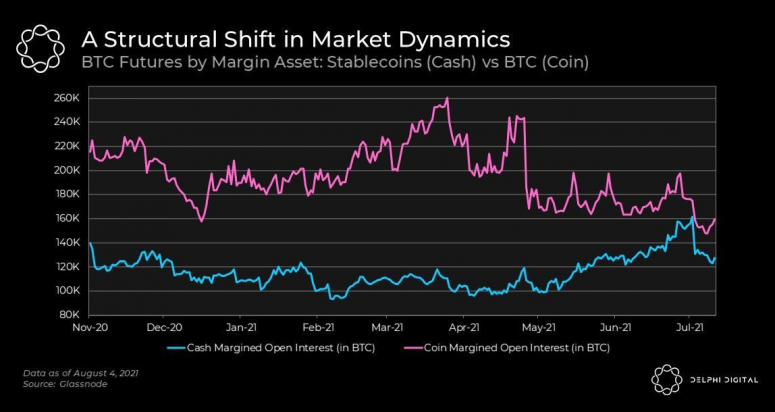 0/ In today’s Delphi Daily, we explore how stablecoins have transformed crypto trading.

We analyzed the $BTC options market, the upside of unpegged currencies, and stablecoins as the margin asset of choice.

Check out the full reporthttps://t.co/QwzPNlpyO8