Litecoin embraced support at $65 following a sharp drop on Thursday. A higher short term anchor has been established at $70. LTC/USD is trading at $72 amid a consistent push for further recovery from the bulls.

Litecoin bulls fix their eyes on $80 as recovery looms

LTC is trading above the 50 Simple Moving Average, which gives credence to the bullish narrative. Note that Litecoin has not exchanged hands beneath this crucial level since mid-October.

The 50 SMA is still increasing the gap above the 100 SMA and the 200 SMA, suggesting that buyers have the upper hand. Resistance is anticipated at $80 and is likely to delay the uptrend targeting $90 and $100, respectively.

The TD Sequential indicator has presented a buy signal in the form of a red nine candlestick on LTC’s 4-hour chart. The bullish formation approximates that a surge in demand for Litecoin could see it spike for one to four daily candlesticks. Note that if buying pressure consistently builds, LTC/USD might begin a new uptrend toward $100.

The same 4-hour chart shows that if Litecoin closed the day above the 50 SMA, a breakout might come into the picture for gains eyeing $80 and beyond. Similarly, the Relative Strength Index has recovered from the oversold, thus reinforcing the bullish outlook.

According to the confluence detector, Litecoin is sitting on areas with immense support. The initial anchor is seen at $71.9, as highlighted by the One-day Bollinger Band middle boundary, the previous low 15-minutes, and the previous high one-hour.

The second robust support lies at $71.7 and is home to the Fibonacci 38.2% one-day and the 15-minutes Bollinger Band middle boundary. On the upside, trading above the confluence resistance at $72.9 might trigger a rally to $80. 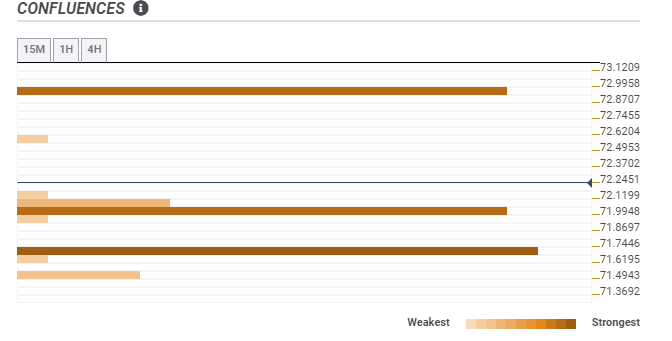 It is worth mentioning that if the price closed the day under the 50 SMA on the 4-hour chart, Litecoin might be forced to abandon the bullish outlook. On the other hand, breaking below the confluence support could trigger massive declines, perhaps strong enough to overshoot the next critical support at the 200 SMA in the same 4-hour timeframe.

XLM ready to catch up with XRP as it targets $1

A brief technical and on-chain analysis on XLM price. Here, FXStreet's analysts evaluate what Stellar needs to do to advance further.

Ethereum price rose exponentially over the past 48 hours but experienced a massive flash crash on October 21. While this pushed ETH down significantly in a short period, the bulls’ perseverance kept the token afloat and ready for a new journey.

US public pension fund pours $25 million into Bitcoin and Ether

Institutional interest in cryptocurrencies continues to rise as a pension fund in the United States has made a substantial purchase in Bitcoin and Ether as the leading cryptocurrencies recently reached new all-time highs.