Bitcoin (BTC) is off to a better start than most this week as bulls avoid serious losses into the weekly close.

Still heavily tied to declining stock markets, the largest cryptocurrency is nonetheless defending $30,000 on May 23 and eyeing the top of its post-LUNA trading range.

While there are no signs of an impending miracle price recovery, some are hoping that upside will feature before any form of reversion to a downtrend.

Macro conditions remain tenuous — and the week of the World Economic Forum’s (WEF) Annual Meeting is due to add fuel to the fire surrounding tolerance of Bitcoin.

Add to that the largest downward difficulty adjustment since last July and it becomes clearer that Bitcoin is battling for strength on multiple fronts.

What could happen in the coming days? Cointelegraph presents several factors to keep in mind when it comes to BTC price action.

In a refreshing contrast to recent weeks, Bitcoin managed to show strength following the weekly close into May 23.

Despite still sealing a record eighth weekly red candle in a row, the lack of breakdown allowed BTC/USD to instead retain $30,000.

For Cointelegraph contributor Michaël van de Poppe, the trend was already in evidence ove the weekend.

Given the overall picture with stocks correlation and monetary tightening forcing them down, not everyone was confident in upside continuation on Bitcoin.

“My preferred Bitcoin scenario is a nuke straight to $22k before big bounce close to $40k,” popular Twitter trader Nebraskan Gooner told followers on the day.

This would provide the best opportunity for bear market bounce and catch a lot of people off guard. Good to monitor all scenarios especially with everyone being so confident of a bounce.

That perspective chimes with existing demands for Bitcoin to beat its previous bottom of $23,800 set on the back of the Terra LUNA meltdown.

Late last week, Filbfilb, co-founder of trading suite Decentrader and long-time market commentator, said that it was time to accept that the largest cryptocurrency was in a bear market.

“Should we lose the current support at $28,670 then the final support before new lows sits at $26,512,” he added at the time, identifying support and resistance levels which have yet to see a retest.

To the upside, should price break through the daily resistance then the lower boundary of the Log Growth channel is at $34,270.

In the meantime, regardless of the strength of $30,000 this week, there should be relief before any potential series reversal, popular Twitter account IncomeSharks argued.

At the time of writing, BTC/USD circled $30,500, data from Cointelegraph Markets Pro and TradingView showed.

The first in-person Annual Meeting of the World Economic Forum since the start of the Coronavirus pandemic is the macro trigger of the week.

As the economic elite gathers in Davos, Switzerland, from May 22 through May 26, markets are gearing up for potential volatility on the back of their forthcoming remarks.

For Bitcoiners, the event tends to be a stressful one as the industry attempts to gauge sentiment among traditional finance heavyweights.

This year is likely no different — just one month ago, the WEF released a video arguing that Bitcoin should change its Proof-of-Work algorithm to Proof-of-Stake for environmental purposes.

An accompanying campaign, “Change the Code,” from Ripple co-founder and Executive Chairman Chris Larsen and Greenpeace USA, is attempting to gain mainstream support for the swap.

The implosion of stablecoin TerraUSD (UST) this month further dragged crypto into the crosshairs of the financial establishment. Christine Lagarde, President of the European Central Bank, claimed that all cryptocurrencies are “worth nothing” and therefore — perhaps paradoxically — require regulation.

“It is based on nothing, there is no underlying assets to act as an anchor of safety,” she told Dutch television show College Tour in an interview released May 22.

Both the WEF and Lagarde have come under fire from Bitcoin sources, with even firms such as Swiss native Bitcoin Suisse showing little public tolerance for their criticism.

The Oslo Freedom Forum, to be held from May 23 through May 25 in Oslo, Norway, describes itself as “a global gathering of activists united in standing up to tyranny.”

Speaking at the event are a host of Bitcoin’s best-known names, including economist Lyn Alden, Strike CEO, Jack Mallers and Elizabeth Stark, co-founder and CEO of Lightning Labs.

“Two international forums starting tomorrow are on the surface similar, but diametrically opposed. The World Economic Forum and the Oslo Freedom Forum. A necessity of manipulated money is coercion, and the loss of individual rights and freedoms. See you in Oslo,” entrepreneur Jeff Booth, also due to attend, tweeted over the weekend.

Major Bitcoin price drawdowns are not without their consequences.

According to the latest estimates, Bitcoin’s network fundamentals are now due to adjust for the trip to $30,000.

Difficulty, which reflects changing dynamics among miners, will reduce by around 3.3% at its next automated readjustment this week. While modest compared to some adjustments, the change will nonetheless be the largest downward shift since July 2021.

The reason is simple — Bitcoin price action has not only headed south, but is challenging miners’ profitability.

Miner production cost is key in determining their ongoing activity, and a decline below the number, currently at around $26,000, would cause larger shifts in network fundamentals in order to maintain profitable participation.

According to monitoring resource MacroMicro, as of May 21, it cost an average of $26,250 to mine one bitcoin.

Despite possible profitability pressure based on estimated data, miners are not showing signs of capitulation, still keeping BTC sales to a minimum, according to the latest figures from on-chain analytics platform Glassnode.

Bitcoin’s mining hash rate, meanwhile, has come off its all-time highs to circle an estimated 233 exahashes per second (EH/s) as of May 23.

The market is cold, but the fundamentals are full of heat from mining rigs. 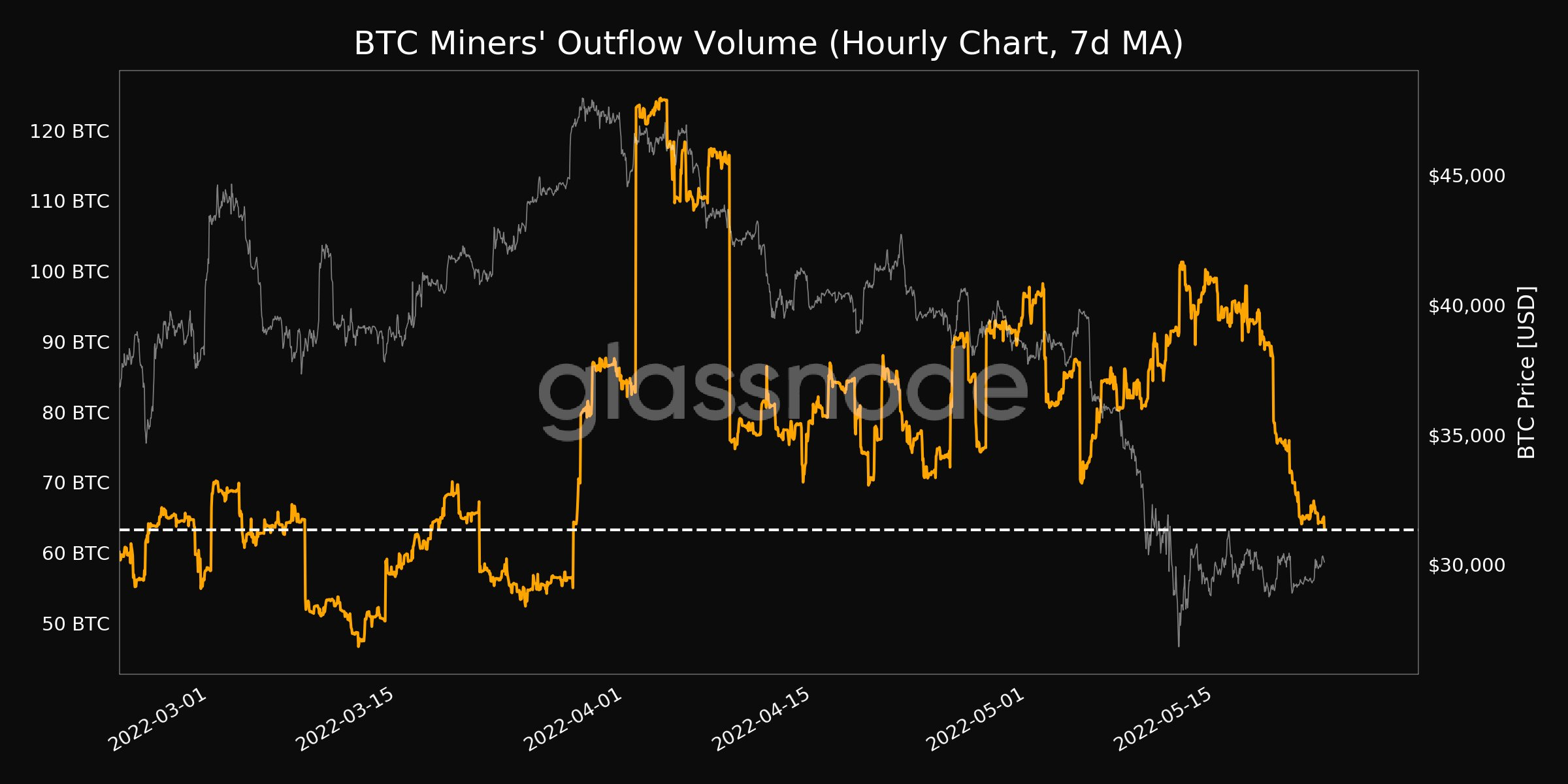 Bitcoin has been famously boring for the mainstream consumer base throughout 2022 thanks to price action, but now, even participation from existing investors is waning.

On-chain data shows that volumes have been in steady decline, with the notable exception of the post-LUNA panic.

From May 9 onwards, the moving average began falling precipitously, and by May 22 had fallen 70%.

While CryptoQuant’s Ki underscored the lack of interest among retail buyers, fellow analyst Willy Woo argued that it was the big players that really held sway over market fluctuations.

“Very little of the volume and therefore impact on price comes from retail needing to buy groceries,” he wrote as part of a response during a Twitter debate last week.

5% of the supply is owned by people who hold less than $30k of BTC, the bulk of volume is larger investors who sell to hedge market risk. 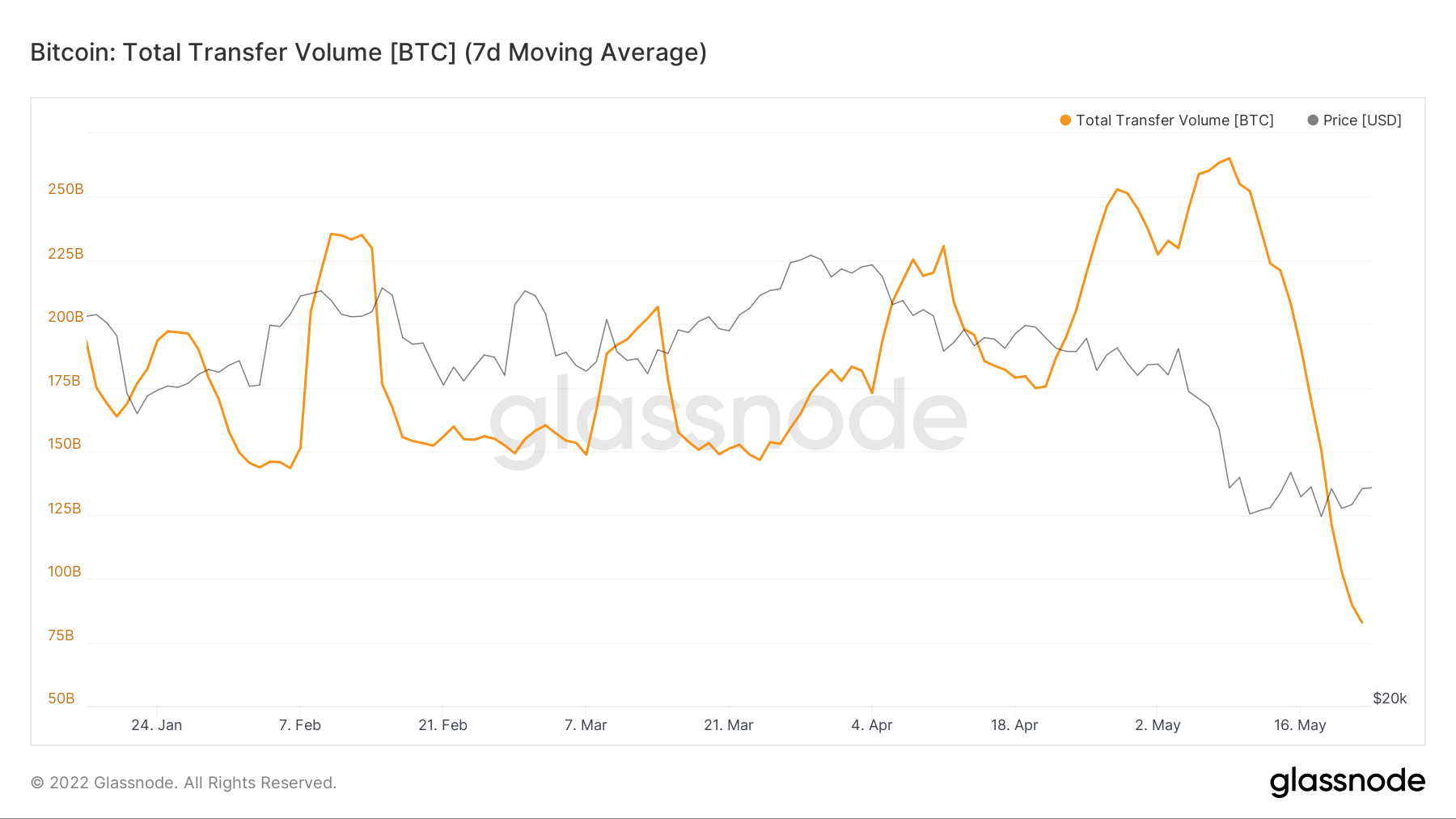 Market sentiment back at rock bottom

In contrast to some modest price strength, Bitcoin is anything but bullish if looked at from the point of view of sentiment.

According to classic sentiment gauge, the Crypto Fear & Greed Index, the majority of the market is bracing for fresh downside.

At 10/100, the Index is back in the lower segment of its “extreme fear” zone which has historically appeared at price bottoms.

Fear & Greed is no stranger to bottom signals this year, having managed to drop to just 8/100 — the lowest since March 2020 — earlier this month.

Analyzing sentiment regarding the highly-correlated S&P 500, trader, entrepreneur and investor Bob Loukas shed some light on what could be a copycat pattern for Bitcoin.

Last week, meanwhile, popular trader and analyst Rekt Capital argued that a more substantial price change would be necessary to change sentiment in a way that matters.

“It's easy to become bullish on BTC on a green day & bearish on a red day. But BTC is still just ranging between $28K-$32K,” he tweeted.

This will continue until either of these levels is broken. Intra-range moves aren't substantial enough to dictate changes in sentiment.