Jim Cramer, host of a popular financial news show “Mad Money” recently made comments on Bitcoin and Gold, sparking a debate in the crypto community. Cramer has received pushback from the crypto community in the past for his crypto recommendations, urging investors to shed their holdings right before Bitcoin’s massive bull run, fueling a narrative called “Inverse Cramer.”

Experts in the crypto community criticized Cramer’s recent bearish comments about BTC and interpreted it as a “buy signal” for Bitcoin instead.

Also read: Why Solana, Cardano and Polkadot holders are pouring capital into small caps in 2023

Jim Cramer, an American TV personality and the host of CNBC’s Mad Money is notorious for making inaccurate predictions about cryptocurrencies like Bitcoin. Jim Cramer believes that Bitcoin is a speculative asset and recently compared the asset to shares of technology firms like Facebook and Google, leading companies in the Nasdaq 100 share index. Cramer argued that BTC is no different from shares of technology firms.

In a recent episode of Mad Money, Cramer urged investors to look into gold, as opposed to cryptocurrencies. Cramer used a chart by DeCarley Trading that compares Bitcoin futures performance to Nasdaq100. The chart goes back to March 2021 when both indexes started moving in close proximity to one another.

Commenting on the chart, Cramer said that Bitcoin is neither a form of currency nor a secure store of value. 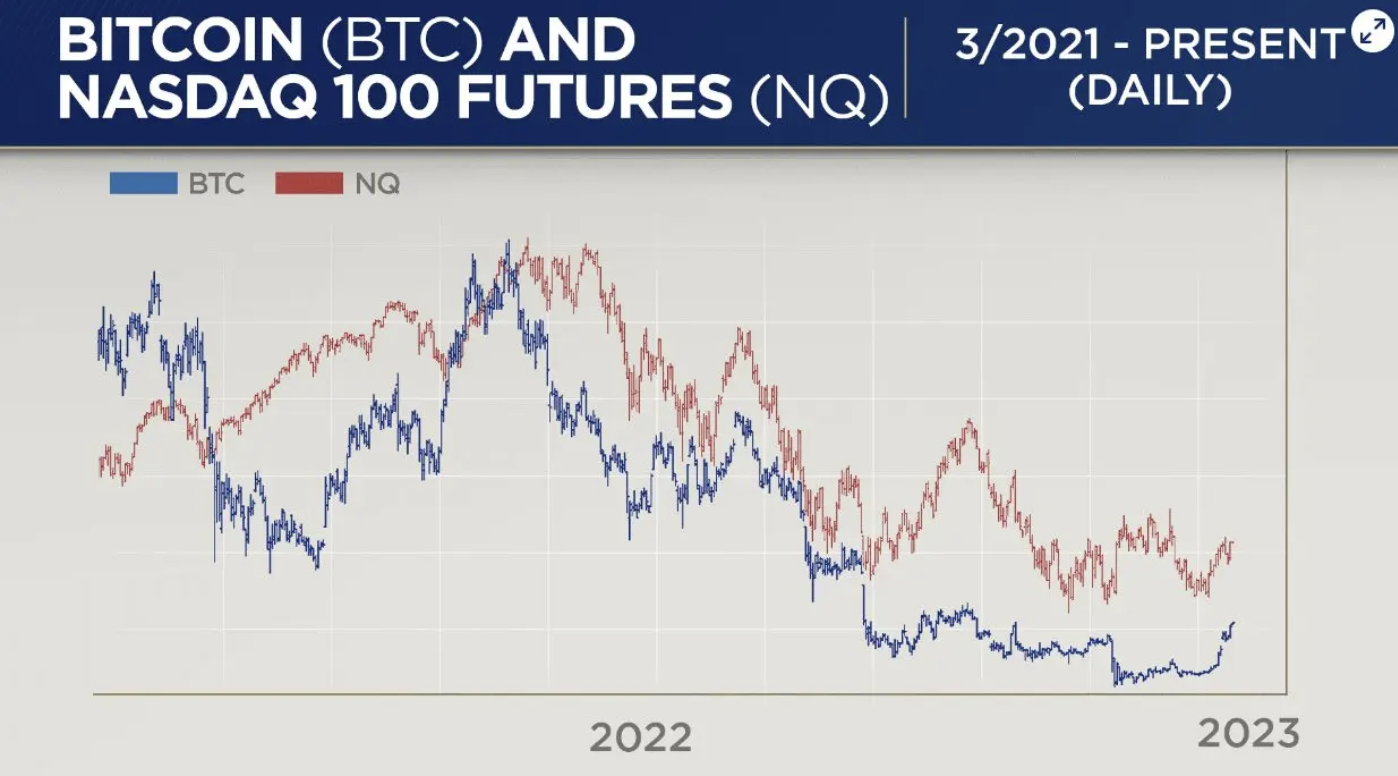 Cramer elaborated on the chart above:

The charts, as interpreted by Carley Garner, suggest you need to ignore the crypto cheerleaders now that Bitcoin’s bouncing. And if you seriously want a real hedge against inflation or economic chaos, she says you should stick with Gold. And I agree.

Cramer’s comments led to pushback from the crypto community, with many people arguing that Cramer is out of touch with the current state of the market and that his opinions should be taken with a grain of salt. This led to the emergence of a new narrative in the crypto world, which has been dubbed the "Inverse Cramer."

Read more about the narrative and how Cramer’s comments on Bitcoin aged here.

The "Inverse Cramer" narrative is based on the idea that whenever Jim Cramer makes negative comments about a particular asset or investment, that asset or investment is likely to go up in value. This is because many traders and investors in the crypto community believe that Cramer's comments are ill-informed or premature.

One of the main arguments against Cramer's comments on Bitcoin is that the TV personality is simply out of touch with the current state of the crypto market. Bitcoin and other cryptocurrencies have been on a bullish run since the beginning of 2023, with prices wiping out the losses from the FTX exchange collapse in November and revisiting 2022 highs.

Cramer's comments fail to take into account the positive developments in crypto prices and the "Inverse Cramer" narrative is a reflection of the growing skepticism that many traders and investors have about traditional financial experts and their ability to understand and analyze the crypto market.

Billy Markus, the software engineer behind Dogecoin critiqued Cramer’s recommendation and comparison of Bitcoin with the Nasdaq 100 and Gold.